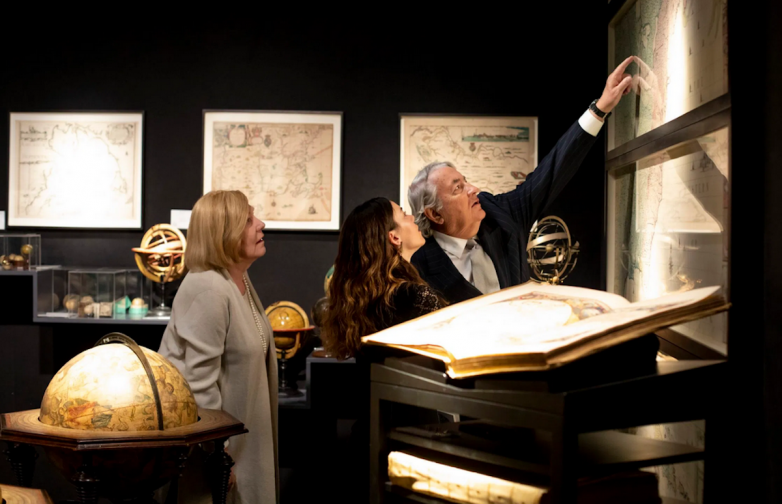 The Daniel Crouch Rare Books booth at the Winter Show 2020.

New York – The Winter Show 2021 takes place on an immersive online platform, on view from January 22-31, 2021 with VIP Preview Access on January 19– 21, 2021. Featuring 60 exhibitors, the virtual fair brings together a dynamic group of leading international dealers that represent a diverse and global mix of fine and decorative arts from ancient times to the present day. The Show is New York’s longest-running art, antiques, and design fair, established in 1954 by East Side House Settlement to benefit the community- based organization’s critical mission serving the Bronx and Northern Manhattan. All net proceeds from The Winter Show’s VIP Preview Access and any additional donations directly benefit East Side House and contribute substantially to the organization’s life-changing work.

The Winter Show’s new online platform allows exhibitors to present works in a variety of formats including a three-dimensional virtual gallery exhibition, featuring up to twenty artworks and objects at a time. Visitors are able to take in the digital presentations as a whole and view close-up, detailed views of the range of works displayed. The new platform also provides a space for discussion and engagement, offering virtual “office hours” for visitors to connect with dealers directly by phone, text, or video chat via Zoom. In keeping with the Show’s commitment to presenting an unparalleled and high-quality selection of works in the fine and decorative arts, objects in the online fair have been reviewed by photographs and documentation for authenticity, date, and condition by a committee of experts from the United States and Europe.

"We’re thrilled to share the first online edition of The Winter Show,” said Helen Allen, Executive Director. “We are grateful to our exhibitors, partners, and the institutions and leading voices in art, antiques, and design who have adapted to our current times and brought together incredible presentations and engaging programming for digital audiences this year. It’s a tremendous opportunity to be able to support the mission of East Side House and expand awareness of the organization’s critical work.”

Exhibitor Highlights
The 2021 online edition offers collectors and connoisseurs the opportunity to acquire and encounter an extensive range of works including painting, photography, sculpture, tapestry, prints, ceramics, jewelry, arms and armor, antique furniture, and contemporary design. Dealers from around the world present exclusive art and objects, highlighting historically significant pieces by leading designers, artists, and makers in their respective fields. Jonathan Boos (New York, USA) who specializes in American paintings, drawings and sculpture of the 20th century, features an important painting by Jacob Lawrence (1917- 2000), Makeup (Dressing Room), 1952, from the artist’s experimental “Performance” series made in the early 1950s that depicts actors transforming into characters through elaborate, harlequin-esque stage makeup. Robert Simon Fine Art (New York, USA) presents The Judgment of Paris, a significant German Renaissance oil painting by Lucas Cranach the Elder and Workshop, alongside other European works of the Renaissance and Baroque periods. Menconi + Schoelkopf Fine Art’s (New York, USA) presentation includes a watercolor work by Winslow Homer from 1885 and an oil painting by Thomas Cole, View of Schroon Mountain (1838) among other important works of American art. Donzella (New York, USA), a forerunner in the 20th century design community, highlights a rare pair of iconic egg chairs by Ico & Luisa Parisi from 1953, produced by Cassina.

Design Co-Chairs
The Winter Show’s 2021 Design Co-Chairs are Wendy Goodman, Thomas Jayne, and Frank de Biasi. Each year the Show invites leaders from the worlds of interior design and architecture to lend their voices as Design Co-Chairs, reinforcing the Show’s deep relationship with the design community. This year’s digital format has provided new avenues to showcase the use of historic art and objects in contemporary architecture and design. The fair’s platform will feature a virtual viewing room designed with works selected by the Design Co-Chairs from the Show’s 60 exhibitors.

To see the full list of events and register in advance for live conversations, please visit https://thewintershow.org/events.