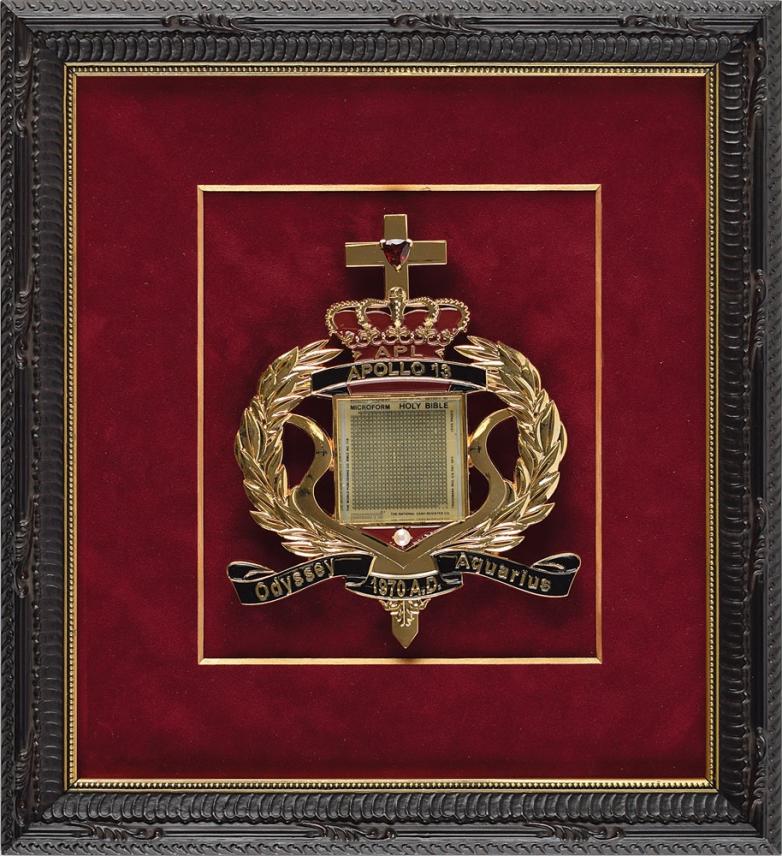 A rare flown lunar Bible from the Apollo 13 mission.

This is the very first, only, and last time a complete slice from this ultra-desirable lunar meteorite NWA 5000 will be put up for auction from the original source.

At 702.89 grams, "The Perigee," is also the largest and heaviest belonging to the exclusive group of seven complete slices originating from the record-setting 11,528-gram main mass discovered in 2007.

This stunning specimen contains a generous amount of 4.5 billion-year-old gleaming metal, and the 3D-like matrix contrast is striking—presenting breccias within breccias—it actually takes on the appearance of the Moon.

Von Hupé Planetary Collection curator, Adam Hupe, saved the very finest complete slice for last, holding this fusion crusted example back because, in his opinion, it represents the best of the best. Six of the seven slices were sold privately to some of the world's wealthiest, most discerning meteorite collectors.

The flown Beta cloth is accompanied by an extensive provenance package of visual evidence, signed testimonials, and a history of the Apollo 11 lunar communion service, which is highlighted by a signed letter of provenance from Aldrin, dated November 14, 1998.

"This flown bag carried with it the means to perform the first religious ceremony performed on another celestial body, as the very act of the communion service itself appears almost tantamount to the achievement of Man's first lunar step," said Bobby Livingston, Executive VP at RR Auction.

Also up is a signed replica chalice that was personally autographed by Buzz Aldrin, in 2011. Aldrin returned the original communion chalice he used on the Moon to Webster Presbyterian Church in Webster, Texas, where he served as an elder. The lot is accompanied by a photo of Aldrin taken at the time of signing.

Among other highlights, dozens of significant Apollo and Space Shuttle hardware pieces, a multitude of flown items, and astronaut autographs. A section honoring the 50th anniversary of Apollo 13 includes flown checklist pages, a rare flown lunar Bible, and hardware associated with the near-disastrous mission.

Space & Aviation Auction from RR Auction will begin on April 9 and conclude on April 16. For more information, go to www.rrauction.com.