Single-Owner Collection of Rare Maps to be Auctioned Online 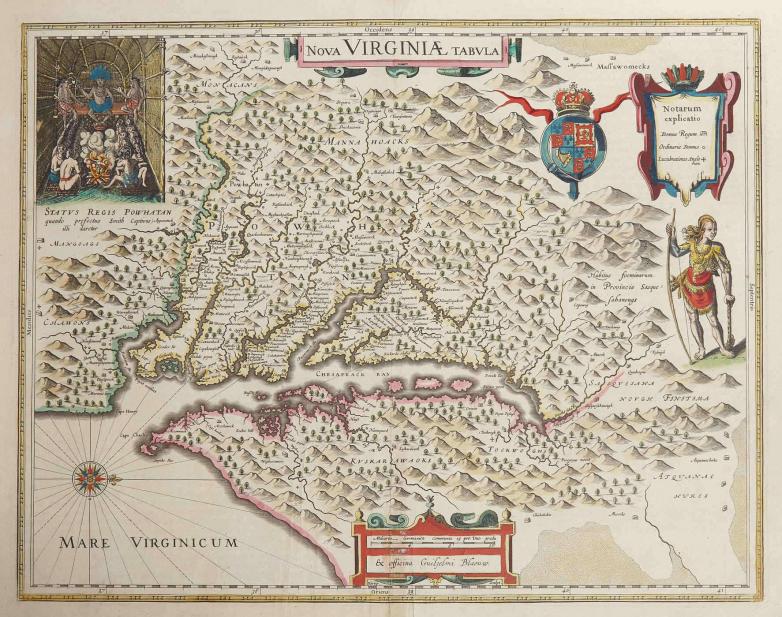 New Orleans – An important single-owner collection of rare, historical maps – many of them hundreds of years old and colorful, beautiful renderings of the world, the United States and portions of the United States – will be sold in a two-part online-only auction by Crescent City Auction Gallery. Bidding is being done exclusively through the platform LiveAuctioneers.com.

A star lot of Part 1 is expected to be a 1642 hand-colored copper engraving by Willem Janszoon Blaeu (1571-1638), titled Nova Virginia Tabula, a 17 ½ inch by 22 ½ inch depiction of Virginia, with Native American vignettes (est. $1,000-$2,000). Blaeu was a Dutch cartographer, atlas maker and publisher. He was one of the notable figures of Dutch cartography in its golden age.

Two maps by Blaeu are being sold as one lot. One is a hand-colored 1640 effort titled Virginiae partis australis et Florida partis orientalis, 15 inches by 20 inches. The other is titled India Quae Orientalis Diktur et Insulae, also from 1640, 22 inches by 18 inches. The pair has a pre-sale estimate of $500-$1,000. Maps by Blaeu are highly coveted by collectors.

A map from 1710, titled A New and Correct Map of the World, by Herman Moll (1654-1732), hand-colored and 22 inches by 38 inches, carries an estimate of $800-$1,200. Moll was a London-based cartographer, engraver and publisher. He also hobnobbed with many writers and intellectuals, and was mentioned in Jonathan Swift’s book Gulliver’s Travels.

A map of Louisiana and Part of Arkansas, done in 1838 by the American cartographer Thomas Bradford (1802-1887), 12 ½ inches by 9 ¾ inches, is expected to change hands for $300-$500. Bradford lived in Boston and worked for the America Encyclopedia. His work is held in the collections of the Library of Congress and the Boston Public Library.

Part 2, beginning on June 21st, will be highlighted by a map showing North America, Mexico and the Caribbean by Jean Baptiste D’Anville (1699-1782), titled Amerique Septentrionales (1746), 33 inches by 35 ½ inches (est. $800-$1,200). D’Anville was a French geographer and cartographer who greatly improved the standards of map-making.

A hand-colored map executed around 1740 and focusing mainly on Florida and Mexico by Matthias Seutter (1678-1781), titled Mappa Geographica Regionem Mexicanem et Floridam Americae Unsulas Cursus, measuring 20 inches by 23 ½ inches, should fetch $600-$900. Seutter was one of the most important and prolific German map publishers of the 18th century.

Previews are currently underway and ongoing, from 10-5 Central time, in the Crescent City Auction Gallery showroom located at 1335 St. Charles Avenue in New Orleans. Lots can be viewed every day except Sunday when the gallery is closed. Phone and absentee bids accepted.

Crescent City Auction Gallery is always seeking quality consignments for future auctions. To consign a single item, an estate or a collection, you can call them at (504) 529-5057; or, you can send an e-mail to info@crescentcityauctiongallery.com. All phone calls and e-mails are confidential.