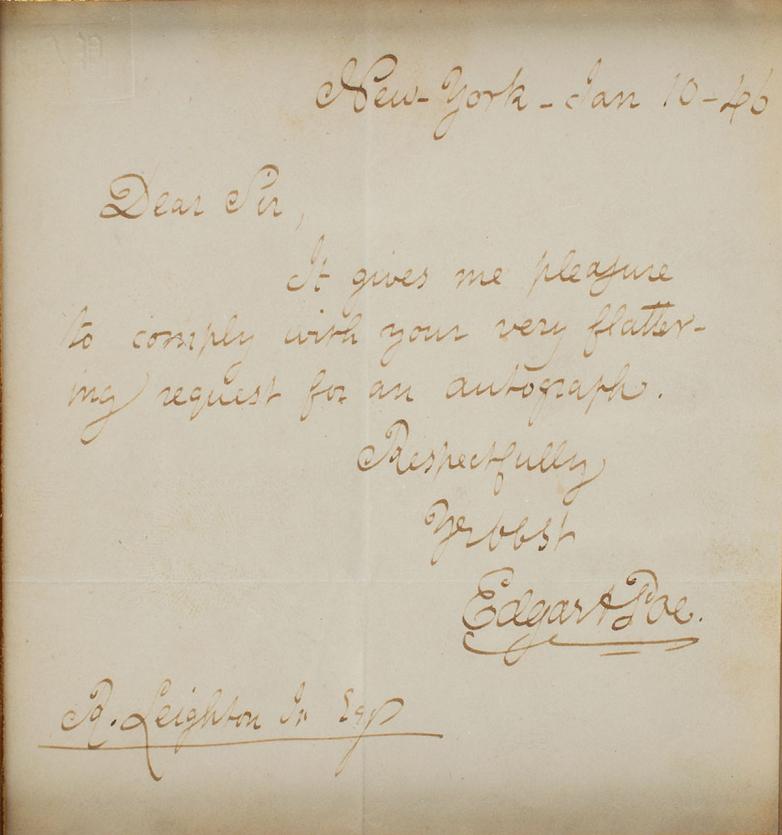 Amherst, NH — Hosted live from our New Hampshire offices, this installment of RR Auction's annual elite Remarkable Rarities sale is one for the ages. From extraordinary Civil Rights Movement artifacts to handwritten equations by Albert Einstein, these specially curated materials are sure to astound the most discerning collector. Sketches by Cezanne and Magritte. Letters from Edgar Allan Poe and F. Scott Fitzgerald. A lock of Lincoln's hair, folded into a telegram from the night of April 14, 1865. Beethoven and the Beatles. A brief history of world culture is presented here.

Highlights from the Civil Rights Movement section include; An "I Am A Man" poster that was made famous with the Memphis sanitation strike of February-April 1968. Shortly after two workers, Echol Cole and Robert Walker, were crushed to death in the back of their garbage truck, as many as 1,300 black sanitation workers in Memphis walked off the job in protest of horrible working conditions and racist discrimination by the city. Martin Luther King, Jr. traveled to Memphis to support the strike as part of his Poor People's Campaign, speaking before a large crowd on March 18 and leading a mass demonstration on the 28th. Mayor Henry Loeb III imposed martial law and brought in 4,000 National Guard troops. The following day, over 200 striking workers continued their daily march, carrying the iconic signs that read: "I Am A Man." The slogan emerged as a unifying theme, and this poster has become one of the enduring images of the Civil Rights Movement. (Estimate: $6,000+)

A Martin Luther King, Jr. signed photograph presented to Philadelphia's first black deputy police commissioner. The wonderful vintage semi-glossy photo of Reverend King, his lapel bearing a pin that reads, "I Believe in Human Dignity," signed and inscribed in black ballpoint, "To Captain Edwards, With Warm Personal Regards, Martin Luther King, Jr." Accompanied by a full letter of authenticity and a letter of provenance from the son of the recipient, stating that this "signed photo was a gift to my late father, Richard T. Edwards, during the mid-1960s. Dr. King presented this autographed photo to Captain Edwards for directing the security detail on his visits to Philadelphia. In 1964 my father was named Deputy Police Commissioner of Philadelphia, the first African-American to ever achieve such position." (Estimate: $5,000+)

Among Scientists and Inventors is Albert Einstein material is a remarkable pairing of items: a one-page typed letter signed "A. Einstein," on Institute for Advanced Study, Princeton letterhead, dated March 4, 1943, responding to Harold Feldman's request to "Prove that ABC is an isosceles triangle if the lines bisecting the angles B and C and going to the opposite sides are equal," in full: "Your little problem has amused me indeed. I was not able to solve it in a purely geometrical way. On the enclosed sheet, a proof is given in part algebraically."
Accompanied by the original mailing envelope and Feldman's original handwritten problem on an index card. Originally sold by Robert F. Batchelder in 1991, and accompanied by a letter to Batchelder from a research assistant associated with the publication of the Collected Papers of Albert Einstein, requesting photocopies of the materials.

Accompanied by the original mailing envelope and Feldman's original handwritten problem on an index card. Handwritten mathematical manuscripts by Einstein are rare—particularly in so complete a form—and, paired with Einstein's playful letter responding to the challenge, this is a particularly excellent example. (Estimate: $25,000+)

The Art, Architecture, and Design section includes; a Paul Cézanne signed letter with original sketches. The extraordinary one-page handwritten letter in French from Paul Cézanne, written on October 19, 1906, just three days before his death at the age of 67, which boasts a pair of boldly penned original ink sketches to the top and bottom portions; the upper sketch appears to be a self-portrait in profile, and the lower, which bears a resemblance to that of his unfinished work 'Les Grandes Baigneuses,' or 'The Bathers,' seems to show leaning branches or fencing through which the observer can detect a small structure in the distance. (Estimate: $50,000+) An original artwork by Belgian artist René Magritte from 1964 entitled 'Dessin pour Le sac à malice' ('Drawing for The Bag of Tricks'), accomplished in black ink on an off-white sheet of artist paper and signed in the upper left corner, "Magritte." Based on his own 1959 gouache painting, 'Le sac à malice,' the drawing depicts a large human heart set upon a short base—as if a trophy—with the open-air background scattered with the movement of clouds and wind.(Estimate: $100,000+)

The Literature section includes; a rare Edgar Allan Poe 1846 handwritten letter. The one-page letter signed "Edgar A. Poe," dated January 10, 1846, written from New York, a brief letter to collector "R. Leighton, Jr. Esq.," in full: "Dear Sir, It gives me pleasure to comply with your very flattering request for an autograph. Respectfully, Yr ob st." Archivally matted and framed with an engraved portrait and a passage from Poe's classic The Raven.

Following the demise of his short-lived newspaper the Broadway Journal, Poe, with his wife Virginia Clemm and her mother Maria, around May 1846, departed Turtle Bay and moved into a cottage on two acres of land in Fordham, New York. The rural setting and the cottage's quaint charms appealed to the family greatly, and Poe's final short story, 'Landor's Cottage,' published not long before his passing in 1849, is presumed to have been inspired by the home. It was also where Poe wrote the classic tale The Cask of Amontillado, the poems' The Bells,' 'Annabel Lee', and 'Ulalume,' and where he published his gossip series on 'The Literati of New York City.' Only our sixth handwritten Poe letter, and our first in five years. (Estimate: $50,000+)

And an F. Scott Fitzgerald Letter that contains a rare mention of his greatest work. The rare and significant one-page handwritten, no date [circa 1925-1926]. Fitzgerald writes from Paris to literary agent and editor William C. Lengel regarding plans for a stage adaptation of the Great Gatsby. In full: "Thanks for your letter about Gatsby. Have just had a wire from Brady asking for dramatic rights and wired my agent asking him to see what Brady's plans are—all this before your letter came, as it went to Cannes & Homer Croy whom I've never met. As soon as I get any word I will let you know. Perhaps he has no one in mind for the dramatization & in that case it would much better [sic] if it were done by someone like you who already has some plan in his head. With many thanks." After signing, Fitzgerald adds a postscript and signs again with his initials: "Word has just come that Owen Davis is going to do it for Brady. Thanks many times for your interest. F. S. F."

Fitzgerald's most famous novel, widely regarded as one of the finest in the English language, was published in spring 1925 to a rather unremarkable reception. Still, with the public's ever-increasing appetite for entertainment, newly published fiction provided an instant source of material for the stage and screen. With its dramatic force and colorful characterizations, it was only a matter of time before Gatsby would attract attention in showbiz circles, and it first made the jump from page to stage in a semi-successful adaptation by dramatist Owen Davis that ran for 112 performances in 1926. Later that same year, Gatsby, as played by Warner Baxter, made his debut on the silver screen. Letters mentioning Gatsby occupy a singular niche at the pinnacle of Fitzgerald's autograph material, and, indeed, among literary autographs as a whole. (Estimate: $30,000+)

The Classical Music section contains a Ludwig van Beethoven letter concerning sending his 'Missa Solemnis' to London. The one-page handwritten letter in German, signed "Beethoven," circa September 1823. Letter to Franz Christian Kirchhoffer, where he invites him to lunch at his flat on Sunday, with his nephew Karl: the weather appears promising, and his presence would be a great pleasure for both of them. In full (translated): "My dear Kirchhoffer: If it is not possible to send a packet through the English embassy to London, please inquire. I will therefore tomorrow send an answer or if you think it is good for the occasion? On Sunday we will certainly see you, my Karl and I at table, the weather seems to be favorable again and it will be very pleasant for us both to have you here." Accompanied by an export certificate from the French Ministry of Culture. (Estimate: $100,000+)

Online bidding for the Remarkable Rarities by RR Auction has begun and will be followed by a live sale on Saturday, September 12, at 1 PM ET. For more information, go to www.rrauction.com.