Peter Burra Archive to be Offered at Bonhams 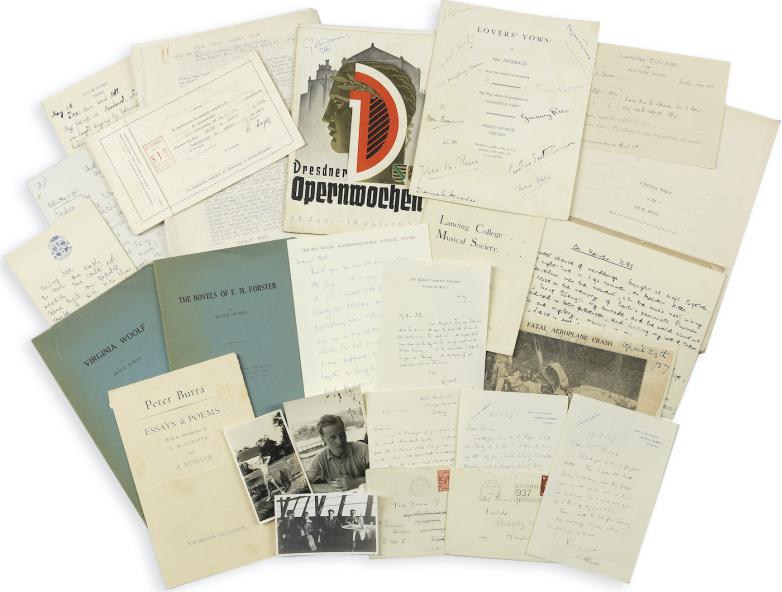 London – The name Peter Burra is now largely forgotten, yet before his untimely death in a plane crash in April 1937 he was regarded as one of Britain’s finest and most influential critics. At school and Oxford with the tenor Peter Pears he was friends of the composers Benjamin Britten and Lennox Berkely – who dedicated an opera to him – the poet W.H. Auden and the novelist Christopher Isherwood. Described by E. M. Forster as ‘the best critic of his generation’ Burra was all set for a glittering career at the time of the accident. An archive of letters – many of them unpublished – photographs, poems, plays and publications spanning much of his brief life will be offered at Bonhams Fine Books and Manuscripts sale in London on Wednesday 22 June. It is estimated at £15,000-20,000.

Matthew Haley, Bonhams Head of Books and Manuscripts, said: “Reading Peter Burra’s letters and the other wonderful material in this archive it is impossible not to wonder what great things he might have gone on to achieve. His personal and professional circle included musicians, poets and writers whose work had a profound and long-lasting influence on cultural life in 20th century Britain and beyond. Peter Burra would surely have been among that number had he lived longer.”

Peter Burra (1909-1937) was an inveterate and lively correspondent, and the archive is rich in letters from his schooldays at Lancing College onwards. From Christ Church, Oxford, where he edited the magazine Farrago and published early poems by Evelyn Waugh and Cecil Day Lewis, he wrote frequently to his mother and sister about his activities in music circles, his taste in books – Waugh’s Decline and Fall ‘screamingly funny’ – and the gossip of university life.

After Oxford, Burra was retained by The Times as a special arts correspondent, in which capacity he visited Germany in 1932, filing copy on art and music. It is, however, his private and prescient reflections on the political situation there which resonate most today. After hearing Hitler speak in Munich, he wrote "...It was the most repulsive exhibition I've ever seen... I think it advisable to see as much of the country as possible now. It will certainly be uninhabitable in a few months...".

In 1936, while again working on behalf of The Times, Burra attended the Barcelona Music Festival where he struck up a friendship with Benjamin Britten that turned out to have far-reaching consequences. Britten was lodging with Burra at the time of the latter’s death. When he was joined by Peter Pears to sort out their mutual friend’s effects (and it is presumed to destroy any compromising correspondence arising from Burra’s homosexuality) the two began a relationship which was to last personally and professionally for the following 40 years and have a huge impact on the musical life of the nation. The archive includes several letters from Britten to Burra.

Burra published a well-researched and influential biography of Van Gogh and in the Magazine Nineteenth Century an essay on E M Forster, which prompted the novelist to make contact.  In a letter included in the archive Forster writes. “nothing that I have read about myself has ever given me more pleasure... great help at the moment when I am needing it... I have been looking at my books lately, partly on account of your article. I think A Passage to India stands, but the fissures in the others are considerable...”