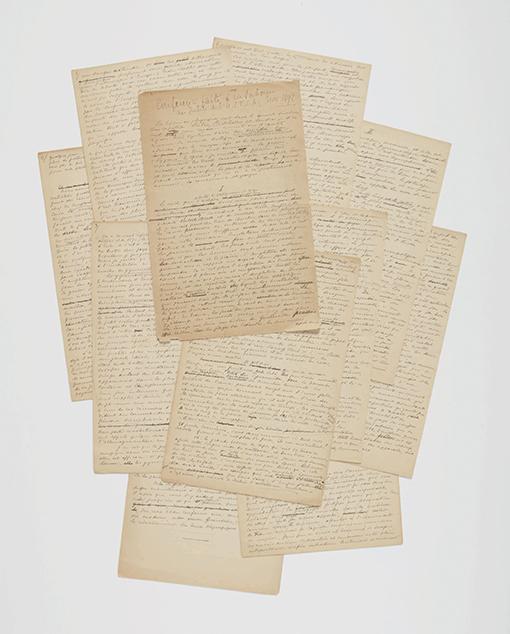 New York — Sotheby’s presents the original Olympic Games manifesto, written in 1892 by French aristocrat, educator and athletics advocate Pierre de Coubertin, which outlines his vision for reviving the ancient Olympic Games as a modern, international athletic competition. The first modern Games were organized shortly thereafter in Athens, Greece in 1896, and the ideas espoused by Coubertin continue to underpin the Olympic spirit of excellence and sportsmanship that has made the Games the preeminent international sporting spectacle to this day.

The 14-page manuscript is the only known copy of the manifesto in existence, and was written in French by Coubertin as a speech he delivered in 1892 for the fifth anniversary of the French Athletics Association held at the Sorbonne. In his speech, Coubertin outlined his idealist vision for reviving the ancient Olympic Games as part of a wave of progressive social movements taking hold in Europe and the United States, and he drew connections to the rise of athletics to other new ideas, technologies and systems that were propelling human progress and innovation, such as the telegraph, railways and developments in scientific research. Coubertin provides case studies on the state of athletics in countries such as Germany, Sweden, the United Kingdom, France, and elsewhere around the world to show that athletic endeavor was no longer primarily the domain of military training, but had evolved into a pursuit of individual excellence that had personal as well as societal benefits.

Speaking of this new class of amateur athletes, Coubertin described them as having “the merit of seeking in effort only the effort itself, of imposing upon themselves constraints to which no-one is pushing them, of submitting to themselves to a discipline which is doubly effective because freely consented to.” He concluded by stating “it is more perfectly human to worship effort in a disinterested way and love difficult things simply because they are difficult. That is the philosophy of sport in general and of our union in particular.”

In this vein, Coubertin described sport as “the free trade of the future” that would trade in the exchange of rowers, fencers and runners. His vision for a world united by athletic pursuit was imbued with ideas from Greek classicism, conservative paternalism, a liberal emphasis on the importance of free individualism and an emerging fin de siècle belief in civilized and peaceful nationalism.

Richard Austin, Head of Sotheby’s Books & Manuscripts Department, said: “The Olympic Games manifesto represents one the most important recorded documents in the history of sport and culture. The modern Olympic Games is one of, if not the single most important global shared human experience, and it represents a universally held belief in the human spirit that is unmatched in any sporting or comparable event. The manifesto boldly proclaims a wholly modern and progressive vision of humanity, and Coubertin’s timeless statement is one that continues to resonate today in its concept of unity.”

The Olympic Games manifesto will be on view at Sotheby’s Los Angeles 22-23 October, as well as Sotheby’s New York 14-17 December. While the original manuscript has never previously been publicly exhibited, a high-quality copy of the manifesto was displayed at Copenhagen City Hall during the 2009 Olympic Congress.