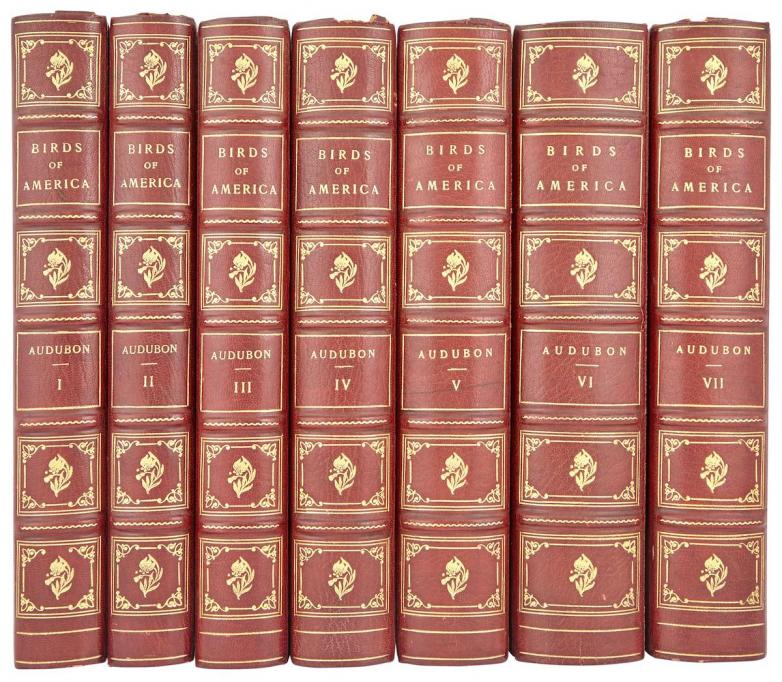 Audubon's The Birds of America from drawings made in the United States and their Territories. Estimate: $10,000-15,000

New York — Doyle’s Rare Books, Autographs and Maps timed auction closing on November 24, 2020 beginning at 10am offers an interesting range of material from a number of private collections and estates. These include a small collection of Montaigne, including the first three John Florio editions; a good collection of the limited first editions of Arthur Rackham; a collections of catalogues raisonnées; a small collection of movie and television ephemera; and the next installment of the Jake Johnson collection of sporting books.

In the area of science and technology, we are pleased to offer material relating to three of the most illustrious figures in those fields: Nikola Tesla, Albert Einstein and Steve Jobs. Tesla is represented by an inscribed copy of Thomas Martin Commerford’s The Inventions, Researches and Writings of Nikola Tesla… 1894, inscribed by Tesla to General Daniel Adams Butterfield (lot 34). Two Einstein lots are on offer (lot 35 and lot 36), the first of which is an interesting pair of letters and other materials relating to a logical question posed by Professor Julian Hugo Bonfante. For Jobs, we have the lid of an Apple II plus inscribed at the “unveiling” ceremony for the Apple Macintosh by the two Steves: Jobs and Wozniak (lot 37).

Of antiquarian interest are a pair of very lovely miniatures from a Book of Hours, attributed to Alexander Bening (lot 2). A copy of one of the great exemplars of Elizabethan prose, John Florio’s great translation of Montaigne, in a binding with the arms of Queen Elizabeth, heads up a small group of editions of Montaigne (lot 14). A small group of binding executed for the library of Madame la Marquise de Pompadour is offered (lot 21).

Art and illustration are strongly represented in this catalogue. Four delightful and funny drawings by H.M. Bateman, most done for The Tatler are offered (lots 77-80). His work is quite scarce, and it retains its wit and verve remarkably well. A small group of very fine Kate Greenaway drawings are on display (lot 82). The collection of Rackham includes several copies with original drawings, most notably the Walton Compleat Angler, this copy 4, one of approximately twelve issued with a drawing. The catalogues raisonnée include the great Zervos catalogue of Picasso (lot 156); and an attractive Lichtenstein drawing in a copy of Drawings and Prints, Lausanne: [1970] (lot 144).

Literature includes a fine copy in dust jacket of John Steinbeck’s The Grapes of Wrath (lot 74) and an inscribed copy of Margaret Atwood’s dystopian classic The Handmaid’s Tale, now adapted into major television series (lot 41). Also offered from the Estate of television producer Richard Schilling are several quality items of film and related memorabilia such as a prop chair from Rick’s Café in Casablanca (171) and six books especially bound for Humphrey Bogart’s yacht, Santana, formerly in the estate of his wife Lauren Bacall (lot 170). A group of film posters rounds out this section and includes the very large and rare three sheet poster for the 1951 film version of The Great Gatsby (lot 174).

In Americana, we offer a remarkably timely reminder of the nature of American civic life, Alexis de Tocqueville’s Democracy in America, 1838 and 1840 (lot 201). Sets of the quarto editions of Audubon’s Birds and Quadrupeds are always attractive and desirable (lots 182 and 183), as is McKenney and Hall’s series of portraits of the North American Indians (lot 193). An exceptional American naval desideratum, the log for Matthew Calbraith Perry’s voyage in the Shark, during which he claimed the Florida Keys for the United States, is presented as lot 194.

The sale ends with a further tranche of material from the collection of Arnold (“Jake”) Johnson, pertaining to angling, hunting, travel and Americana. This includes The Log of the Cruise of President Franklin D. Roosevelt aboard the Schooner Yacht Sewanna to Maine, Nova Scotia and New Brunswick 14 July 1936 28 July 1936, inscribed by Roosevelt to a friend (lot 262); a superb album of original drawings by C.B. Betts of angling and sporting scenes, Washington State, about 1900 (lot 236); the very rare Leave of Absence in the Straits Settlements, Ceylon, Madras and Bombay, Bombay: 1859 (lot 292).