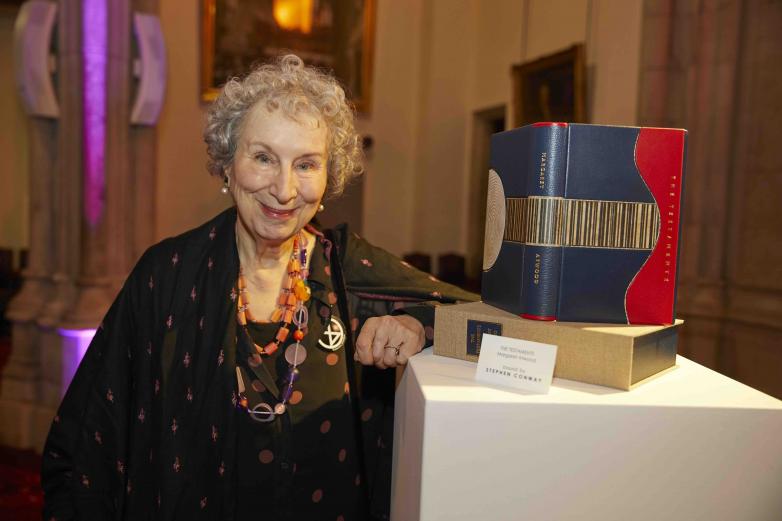 Courtesy of The Booker Prize

Winner Margaret Atwood with her specially bound edition of The Testaments, bound by Stephen Conway.

London — The six shortlisted novels for the Booker Prize 2019 will be on public display at Bonhams Knightsbridge this October, in unique bindings designed for them by Fellows of Designer Bookbinders. The bound books, which were presented to the finalists at the Awards ceremony on 14 October, will be on show in the foyer of Bonhams, Montpelier Street from Wednesday 16 October – Friday 1 November (9.00 – 17.30 weekdays; 11.00–15.00 Sundays. Closed Saturdays).

The joint winners of the 2019 Booker Prize were, Girl Woman Other by Bernardine Evaristo (binding by Sue Doggett), and The Testaments by Margaret Atwood (binding by Stephen Conway). The Booker Prize has been jointly awarded twice before, to Nadine Gordimer and Stanley Middleton in 1974 and to Michael Ondaatje and Barry Unsworth in 1992. In 1993, the rules were changed so that only one author could win the prize. This is the first time since then that two authors have been announced as joint-winners. The 2019 winners will share the £50,000 prize money.

The four other novels on the sort list, with the name of the Designer Bookbinders Fellows in bold, were:

Hand-bound fine bindings can take many months to complete, but with the Booker Prize the Fellows must execute the twenty-five stages involved in the four to five weeks between the announcement of the shortlist and the Awards ceremony.

Also on display, will be some bindings by Philip Smith (1928-2018), including an enormous “book wall” tower of Dante’s Inferno, and a number of bindings for Booker Prize shortlisted novels from previous years.