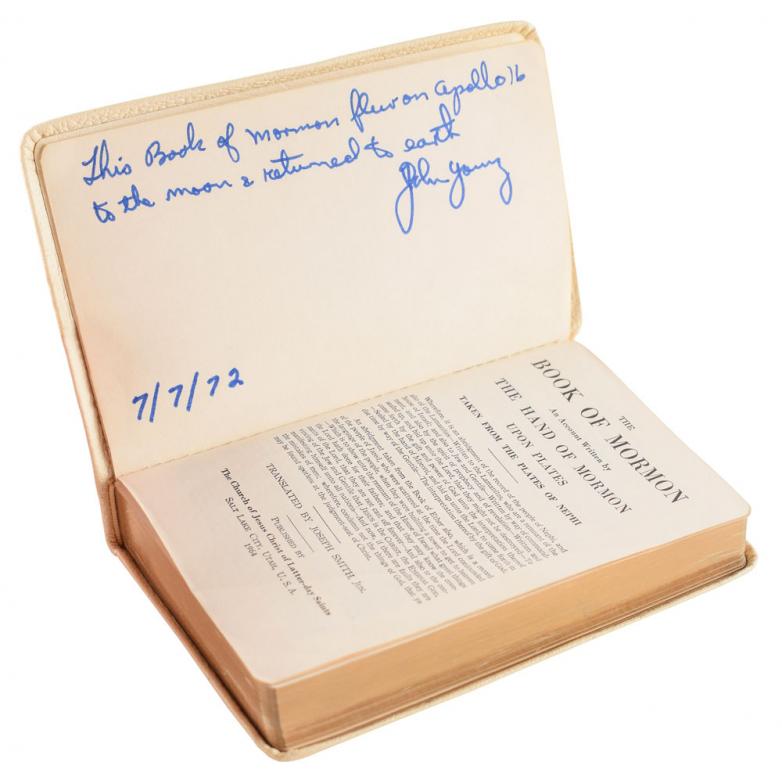 Boston — The extraordinary ‘Book of Mormon’ carried to the moon on Apollo 16 by Commander John Young and later presented to NASA photographer M. Edward Thomas following the mission will be auctioned by Boston-based RR Auction.

The signed and flight-certified opposite the title page, "This Book of Mormon flew on Apollo 16 to the moon & returned to earth, John Young, 7/7/72."

In his capacity as NASA's astronaut photographer, Marion Edward Thomas (known as 'Ed') spent countless hours with America's spacemen and grew to closely know them.

While working with John Young in 1972, he was inspired to ask if the Apollo 16 commander planned to take a Bible to the moon with him.

Young agreed that having the Lord's book with him on the momentous occasion was a good idea, and Ed promised to provide him with one.

Fearing that the family's heirloom Bible may not return if tragedy struck, his wife—a devout member of the LDS Church—lent her personal, purse-sized Book of Mormon for the task. John Young proceeded to carry this Book of Mormon to the moon and return it safely to Earth, where it became central to the conversion and baptism of Ed Thomas, the only non-LDS member of his family.

Accompanied by a full letter of authenticity, an official vintage color glossy NASA photo of Young handing this book to Thomas upon his return to Kennedy Space Center in May 1972, and several packets of provenance information concerning the history of this flown Book of Mormon and the conversion and baptism of M. Edward Thomas.

This book is also known to be manifested on John Young's Personal Preference Kit list for the Apollo 16 Command and Service Module ‘Casper.'

This flown Book of Mormon later led to Thomas's introduction to Spencer W. Kimball, president of the Church of Jesus Christ of Latter-day Saints, who became the most influential figure in his spiritual development: the two grew to be close friends, and Thomas served as a photographer for a number of Kimball's trips and special events.

Thomas would be baptized—by his son, to whom President Kimball had delegated his personal authority while ill—in Salt Lake City on October 5, 1981.

“It’s an important sacred text flown to the moon —  that proved pivotal to one man's conversion, this is a truly awe-inspiring relic of Apollo 16,” said Bobby Livingston, Executive VP at RR Auction.

Among other items featured in the online offering the substantial archive from the career of M. Edward Thomas. The collection includes three of his cameras, over 300 original vintage photographs, 200 official NASA lithographs, and unique ephemera gathered during his time as a NASA insider. In addition, Thomas’s impressive vintage collection of 100’s early NASA photographs, taken during his 25 year career as NASA's official astronaut photographer at Kennedy Space Center.

The Space & Aviation Auction from RR Auction will begin on October 11 and conclude on October 17.  For more information, go to www.rrauction.com.