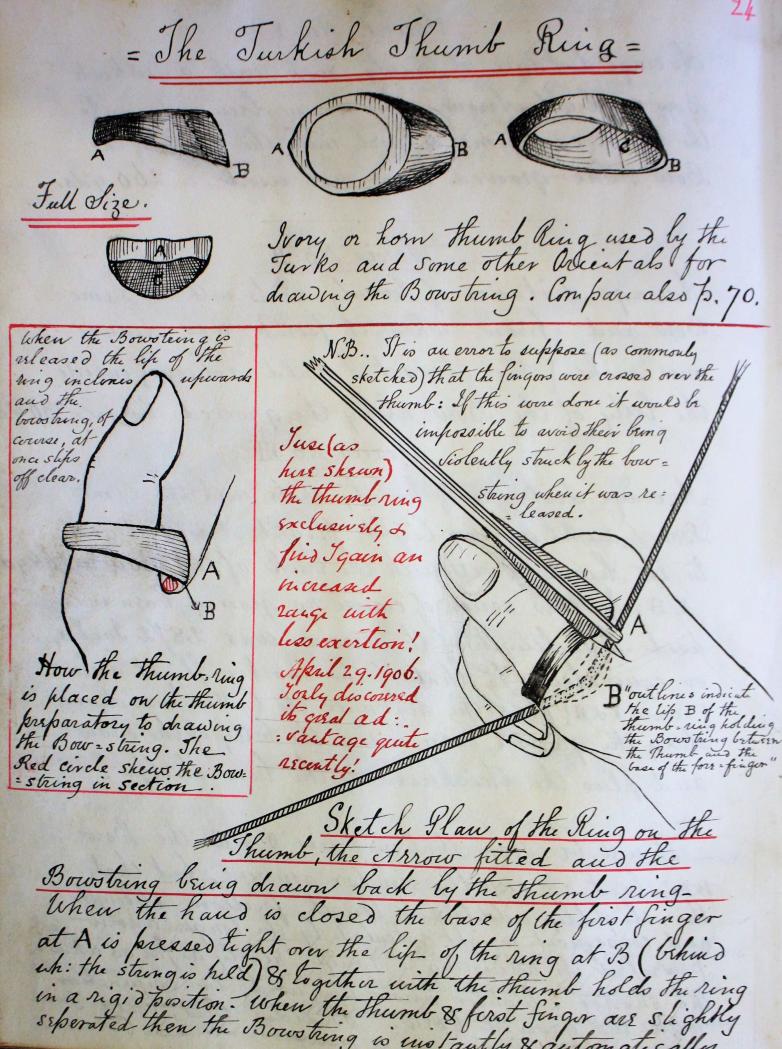 Details from the Archery Manuscript by Sir Ralph Payne Gallwey.

Sir Ralph Payne Gallwey (1848-1916), it appears, was a man with an extraordinary fascination for archery. Written in the first decade of the 20th century, the beautifully compiled manuscript tells of his research into Turkish and Chinese archery, a wide variety of bows and arrows, and methods of shooting. Payne Gallwey’s research was practical, and tables of flight distances, detailed illustrations and photographs of bows in use accompany meticulous hand-written notes. The manuscript also includes photographs of the extraordinary collection of weapons housed at Thirkleby Park.

Payne Gallwey had inherited the Thirkleby Park estate in 1881, but after the death of his son, William, in the First World War, he tried to sell the estate at auction. It failed to sell, and Payne Gallwey died shortly afterwards. The main house, Thirkleby Hall, was demolished in 1927, and only the gatehouse and stable buildings remain. Payne Gallwey was an engineer, historian, artist and ballistics expert, who was a published author on several books on shooting and the crossbow.

Despite the difficult circumstances, it was a buoyant sale, and other interesting lots in the sale included An Inventory of the Household Furniture etc., belonging to the Right Hon.ble Lady Charlotte Finch at her House at Charlwood in the Parish of Rickmersworth (sic) in the County of Hertford taken June the 15th 1767 and other subsequent days, which sold for £800 (plus buyer’s premium) against an estimate of £100-200. The manuscript inventory covers the contents of 38 rooms in Lady Charlotte Finch’s house. Finch (nee Fermor), 1725-1813 was the governess to the children of King George III and Queen Charlotte.

A very unusual 1929 folio of outstanding illustrations of sea creatures by Sidonie Gabrielle Collete and Mathurin Meheut entitled ‘Regarde…’ sold for £1,000 (plus buyer’s premium) against an estimate of £200-400. The vivid, graphic illustrations were printed on vellum using the ‘au pochoir’ or stencilling technique. The hand application of pigments allows for dazzling colours that could never be achieved by a printing press, and the technique was a reaction against mechanisation. According to a letter from David Batterham, a London bookseller that accompanied the book, it is in such pristine condition as it was the last copy from the publisher. A 1953 first edition of Ian Fleming’s Casino Royale, published by Cape with an HMS Dolphin stamp to the front pastedown sold for £1,100 (plus buyer’s premium).