Address Book a Highlight at Sale of Sitwell Family Library 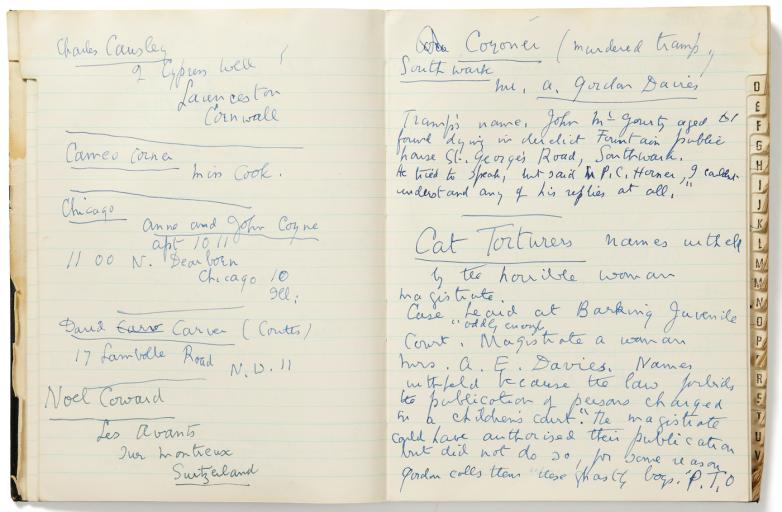 Newbury, Berkshire, England — The address book of one of the most important British female writers Dame Edith Sitwell (1887-1964) was one of the many pieces in high demand in Dreweatts two-day sale of the contents of Weston Hall, family seat of the illustrious Sitwell family for more than 300 hundred years. The address book, which was found amongst other family ephemera, sold for £52,500 against a pre-sale estimate of £200-£300. There was spirited bidding from around the globe, on the telephones and on the internet for the book, highly popular as it offers first-hand evidence of her infamous character. Denise Kelly, Book and Ephemera specialist at Dreweatts, who catalogued the book said, “I am thrilled that Edith Sitwell’s address book did so well in the sale. It was an absolute joy to catalogue such a personal item belonging to Dame Edith. Her personality and humour tumbled out of every page. It is not often whilst cataloguing an address book I have laughed out loud, but Edith’s notes and descriptions of the various people who had annoyed her were very amusing”. Joe Robinson, Head of House Sales at Dreweatts, said: “We are delighted with the result for the address book- not only was it a list of some of the key people of the 20th century it was also a fascinating insight to the stalwart character of an iconic woman known for her cast iron sense of self.”

Known as a slightly contentious figure, Edith Sitwell stepped away from convention. As well as breaking boundaries in both her writing and her fashion sense. Her address book reads like a 'Who’s Who' in the world of music, theatre, publishing, film, ballet and politics. Entries detailing aristocracy, celebrities, family members, international publishers and press contacts.

Her many personal and amusing comments are written in larger text within the addresses and include people she has been impressed by, for example; 'Ian, charming American undergraduate to whom I must write and Well-meaning American pest, BBC, young man (intelligent, wants to interview me), little boy who wrote to me, I must send him Facade', plus many underlined entries with exclamation marks noting people who had annoyed her; 'Psychopath who insulted me after television, That Blasted Priest!, The American who wants to bring his wife to tea, Insolent woman with the shrieking children! Impertinent Catholic ass, Cat Torturers names withheld by the horrible woman magistrate, American woman who has copied my ring.' A tangible slice of social history and a ‘key-hole’ view into the world of the much-revered poet and writer, it is no surprise that there was intense competition for it on the day. (lot 340)   Follow link for a video of it being sold here: https://www.youtube.com/watch?v=efJjckChBU8

Another popular item in the sale was an ebonised oak four-poster bed which William Sitwell explained before the sale, was “the grand bed that Edith Sitwell could be found, while visiting the family at Weston Hall. She would sit regally in bed propped up by many pillows, her head adorned by some sort of turban and on a blue tray would write her poetry.

The bed sold for £57,500 against a pre-sale estimate of £8,000-£12,000. There was frenzied bidding for the historic bed, which incorporated decorative George III needle work hangings and stunning crewel needlework, carried out by one of the family, Susanna Jennens. (lot 235).

A selection of eight 19th century Chinese gilt-copper mounted semi-precious stone and jadeite brooches, converted from buckles are believed to have been brought back from China as a gift for Edith by her brother Osbert Sitwell in 1934. Edith would wear huge stones as rings, or brooches, as was her character. Bidding was competitive for the group, which sold for £30,000 against a pre-sale estimate of £3,000-£5,000. (lot 329)

Alongside her writing, Edith was known for her flamboyant, bohemian dress sense. Described by the Australian artist and great friend of Edith’s, Stella Bowen (1893–1947), as: “An altar on the move”, she often wore flowing gowns, hats, feathers and multiple rings. One of the current members of the Sitwell family, MasterChef judge and food & wine critic at The Telegraph, William Sitwell, tells us about an entry in Noel Coward’s diary describing an incident where, while on a visit to Weston Hall, Edith went missing after lunch. A search party was set up to look for her and she was eventually found amongst the cabbages! Noel Coward commented, “She couldn’t see where she was going on account of her hat!”

Joe Robinson, Head of Dreweatts House sales, said: “Dame Edith Sitwell was a woman with a cast iron integrity in her writing and a definite perception of self. This carried through to what she wore and the jewellery she chose. We are delighted that bidders were as tantalised by the history of these pieces as we were excited to have them in the sale.”

Elsewhere in the sale was an important Old Master Drawing by one of the greatest decorative painters of the eighteenth century, the Italian artist Giovanni Battista Tiepolo (1696-1770), which sold for £125,000. The work was discovered in the attic by Henrietta Sitwell, while clearing out the family seat, Weston Hall, for the sale.

The work featured Punchinello, the hook-nosed, humpbacked clowns who were one of the stock characters taken from the Commedia dell' Arte, an early form of professional theatre, which began in Italy in the 16th century and became popular across Europe. (lot 309)

There was high demand for First Editions from the library at Weston Hall, with a leather-bound 1777 First Edition of John Milton’s Paradise Lost a top highlight. The book realised £21,250 against an estimate of £5,000-£7000. Considered one of history’s most influential works, the book bore the signature of Harriet Wrightson of the Sitwell family, who moved into Weston Hall with her second husband, Colonel Hely-Hutchinson, kinsman of the famous General Lord Hutchinson, renowned for the saving of the famous Rosetta Stone and other artifacts. (lot 102)

The first translation of the Western atlas in the Islamic world, which was another discovery made in one of the nine attics at Weston Hall, sold for a staggering £86,250, four times its’ pre-sale low estimate. The exceptionally rare Ottoman folio atlas was by Mahmoud Raif Efendi and titled Cedid Atlas Tercumesi (A translation of a New Atlas) and was one of only 50 ever produced.

A decorated fan featuring bull-fighters was signed and dedicated to Dame Edith Sitwell by its creator, the Russian artist and friend of the family, Pavel Tchelitchew (1898-1957). There was huge competition for the work and it realised £32,500 against a pre-sale estimate of £3,000-£5,000 (lot 362).

Commenting on the sale overall Will Richards, Dreweatts Deputy Chairman, said: “We are absolutely delighted with the outcome of the sale of the contents of Weston Hall, family seat of and the Sitwells. We are proud to have been advising the family for almost 20 years and thrilled for the family that sale has been such a success. It reflects the cultural importance of the Sitwells in the 20th century and of Weston Hall since the early 18th century.”

Joe Robinson, Head of House Sales at Dreweatts, commented: “The sale of the Sitwell collection at Weston Hall marks a moment in time, a passage of much-loved family objects into the hands of new owners and the corridors or new homes. It has been a fascinating sale to produce and I hope we have done justice to the rich history that was encapsulated within Weston’s walls.”