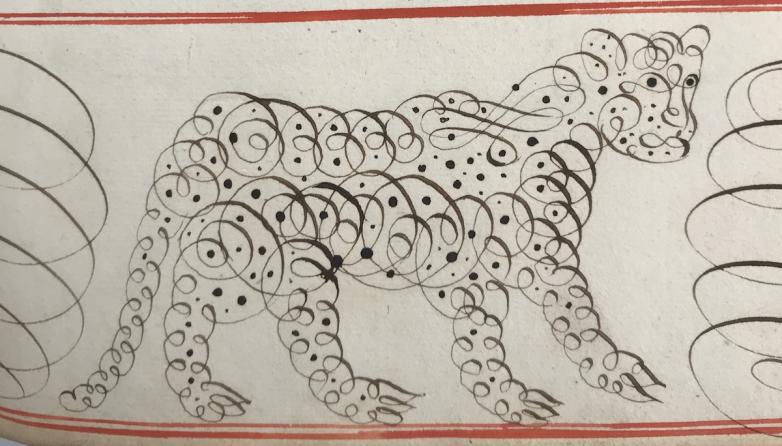 Leyburn, North Yorkshire, UK — The sale included the Selected Contents of Forcett Hall, North Yorkshire, as instructed by the Executors of the late J.H. Edwards-Heathcote Esq., a varied consignment ranging from paintings and furniture to books and antique saddles. The top lot from Forcett Hall was a very rare 17th century copybook that sold for £35,000 (£42,0000, or $57,960, including buyer’s premium). The illustrated copybook demonstrating calligraphy, handwriting and arithmetic, was completed by Sarah North in 1686, a student under private tutor Elizabeth Beane ‘mistress in the art of writing and arithmetic’. Interestingly, the volume was also used to list births and deaths relating to the Pike family of Cork, into whom North married, as well as printed birth records signed by midwives.

From the same collection came a Fine 18 Carat Gold Repeating Pocket Watch with Calendar and Lunar Phase Indications, made circa 1800 by Hubert Sarton from Liege that sold for £6,500. The watch was inscribed for Sir Nigel Bowyer Gresley, 7th Baronet of Drakelow, Derbyshire. Paintings from the collection sold confidently, with John Thomas Hamilton McCallums’ ‘Returning with the Catch’ selling for £7,500, and Sir Oswald Birley’s ‘Portrait of Francis Pike, née Critchley, of Salwick Hall, Lancashire’ selling for £5,200. A portrait of the three children of Sir John Heathcote of Langton Hall by a Follower of George Romney sold well, too, for £4,800. Further highlights from Forcett Hall included a Pair of 19th Century Mahogany Bookcases that sold for £3,800, and an Archaeological Revival Millefiori Brooch that also sold for £3,800.

Top lots from other vendors included a rare 17th century English Delft Puzzle Jug that sold for £15,000. Thought to have been made in London or Brislington, the jug was dated 1670, and decorated with the initial ‘H’ surmounting ‘I’ and ‘F’ and blue chinoiserie figures. Puzzle jugs were very difficult to make and were the mark of a skilled craftsman; as such, they were often made as gifts for special occasions. It is possible that the jug was made as a wedding present for a couple whose surname started with the letter ‘H’. This form of English Delft puzzle jug, with its distinctive knopped neck seems peculiar to the second half of the 17th century.

A Japanese Cloisonné Enamel Koro and Cover by Namikawa Yasuyuki led the Asian Art section, selling for £16,000. The spherical pot and cover was worked in coloured enamels and gold and silver wire and decorated with chrysanthemums and insects. Namikawa Yasuyuki (1845-1927) began working as an artist after the Restoration of the Meiji Dynasty, having previously been a Samurai. He joined the Kyoto Cloisonné Company in 1871, leaving three years later to form his own company, whose works were displayed at several international exhibitions, and visits to his workshop became popular with foreign visitors, including the likes of Rudyard Kipling. The quality of his work received recognition in 1896 when he became one of only two cloisonné artists ever to be appointed Imperial Household Artist to create works of art for the Tokyo Imperial Palace and other Imperial residences. Examples of his work are on display in several major museums around the world, including the Victoria and Albert Museum, the Ashmolean Museum and the Los Angeles County Museum of Art as well as several Japanese institutions.

A West Anatolian 17th Century ‘Lotto’ Rug sold for £9,000. Rugs of this design take their name from the Venetian artist Lorenzo Lotto (1480-1557), who used rugs of this distinctive pattern as props in several his paintings. By the start of the 16th century, ‘Lotto’ rugs and carpets had been imported into Northern Europe and beyond from Istanbul and Smyrna and were enormously expensive status symbols. An Irish George II Style Carved Padouk Wood and Marble Top Serving Table sold for £5,500, and a Victorian Figured Walnut and Ebonised Four Door Library Bookcase made in circa 1870 sold for £5,000.