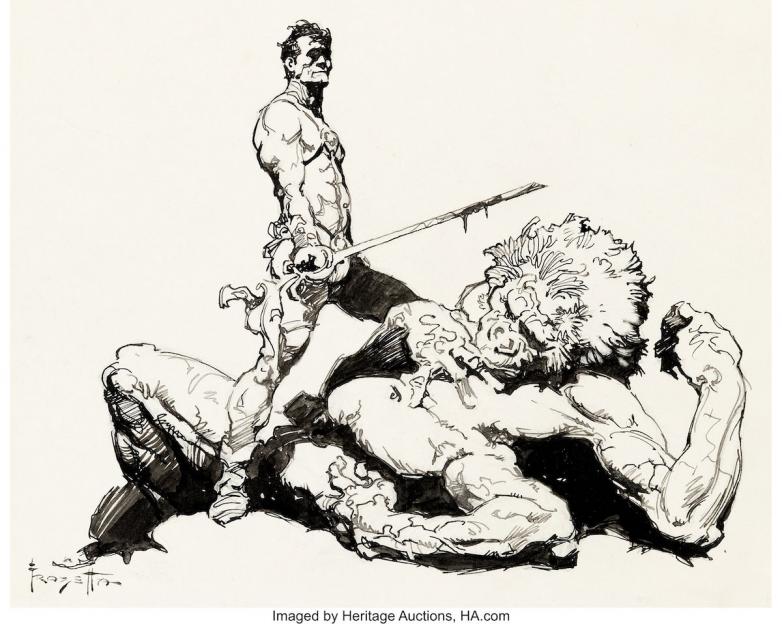 Frank Frazetta's 1971 frontispiece illustration for The Gods of Mars sold for $43,200.

Dallas – For a second day, an auction filled with original comic art was as thrilling as anything DC or Marvel has ever published. And by sale’s end, another $1,414,680 had been spent on some of the finest art to be had no matter the medium or maker.

Friday’s fourth session in Heritage Auctions’ Comics & Comic Art event marked the halfway point in a signature auction that wraps Sunday. And with two days left, already the sale has realized $7,126,216 following blockbuster buys in the comics, comic art and video game categories, including a world record set Friday morning for the most money ever paid for a single video game.

Session 4 was devoted solely to original comic art and illustrations, almost every single one of which – again – sold for well over pre-auction estimates.

If ever one needed proof that the line between fine art and comic art has been erased, here it is – especially as an increasingly popular icon (and iconoclast) again rose to the top of a list filled with revered legends and beloved artists: Frank Frazetta.

Several of the illustrator’s pieces realized high five figures Friday, led by his Fire and Ice concept painting from 1981, two years before the release of the animated swords-and-sorcery epic Frazetta made with director Ralph Bakshi. The painting, done in charcoal, gouache and watercolor, opened at $16,500. But as they’ve done throughout this auction, phone and Internet bidders wrestled over the piece until it climbed to a final price of $78,000.

Several other Frazettas were also at the center of several feisty tugs of war, including his 1971 The Gods of Mars frontispiece illustration, featuring no less than John Carter towering over a bested White Ape of Barsoom. That piece sold for $43,200 – almost nine times its original estimate. And his 1975 work titled, simply, Nude Woman on Horseback garnered $31,200.

On the absolute other end of the spectrum, an original Charles Schulz Peanuts strip sold for $48,000. That’s a relative bargain given its size (this ran on a Sunday in May 1972) and its subject (baseball).

Another mere mortal, this one surrounded by superheroes and villains of his co-creation, was the subject of a spirited bidding war: none other than Jack Kirby, whose self-portrait opened the day at $18,500 and went to a new owner who paid $44,400 for the handsome rendering. This is an unpublished specialty drawing, and those rarely sell for high prices. Then again, seldom seen are works by the King in which he’s surrounded by his co-creations: The Thing, the Red Skull and Doctor Doom.

Superheroes – and villains – of course featured prominently during the event’s fourth of seven sessions, among them Darth Vader, who was seldom seen on the cover of Star Wars comics in the 1970s. Carmine Infantino and Bob Wiacek’s cover to 1979’s Star Wars No. 23 – which also featured the Millennium Falcon, also making an extraordinarily rare appearance on the title’s cover – began the bidding at $16,500 and jumped to lightspeed, eventually selling for $38,400.

Another rare offering proved nearly as valuable: John Buscema’s first-ever Conan the Barbarian sold for $31,200. This shouldn’t surprise: It’s a stunning piece, a collaboration with the great Ernie Chan, and served as the very first page to issue No. 27 in 1973. What does surprise is that it sold for more than four times its pre-auction estimate.

Every lot was a highlight, but here are a few more worth spotlighting:

Keith Pollard and Frank Giacoia’s team-up on the cover for 1979’s Fantastic Four, featuring Galactus and the whole team, which sold for $38,400

It’s worth mentioning, too, a piece that bidders, well, freaked out over as the fourth session came to a close Friday afternoon: underground comix great Gilbert Shelton’s back cover to the third issue of The Fabulous Furry Freak Brothers, published in 1972. At $31,200, this drug-induced farewell was quite the score.