Back in the early 2000s, poet and recent graduate of Emerson's MFA program Justen Ahren returned to his Martha's Vineyard home and found that while the island was full of writers, there wasn't a formal space for folks to get together and share their writing experiences. So, after attending a few far-flung workshops, Ahren wondered why he couldn't foster a literary community in his own backyard.
As we spoke at the Martha's Vineyard Book Festival in early August, Ahren recalled how his  writing program took shape:  "In 2006, the proprietor of the Point Way Inn in Edgartown asked if I had any ideas for using the space in a different way, and without hesitating I suggested creating a writers residency." The next year, the Noepe Center for Literary Arts  opened its doors. "We had two attendees that year. This year we'll welcome 60 writers-in-residence!" he exclaimed.

The nonprofit bills itself as an inspirational sanctuary where writers attend workshops and author lectures, and offers both established and emerging writers space and time to put words to paper. Workshops are open to the public - this week, for example, husband and wife team Author Richard Zacks and ICM Agent Kristine Dahl explain how a book gets published, from conception to publication. Writers interested in the residency program apply through Noepe's website.
Even with the island literary community well-established, a touch of wanderlust drives Ahren to keep traveling. This November he is inviting ten writers to pack their bags and meet up in Orvieto, Italy, for a weeklong workshop devoted to cultivating a daily writing practice. "I chose Orvieto after visiting the town with my daughter. It's small enough to feel intimate, yet big enough to offer ample cultural, social and entertainment opportunities," Ahern said.
The writing center is called Noepe after the Wamanpoag Indian name for Martha's Vineyard. It means 'land between the currents,' and that's what this place offers its visitors - a small, serene patch of solid ground in an ever more turbulent and congested publishing world. 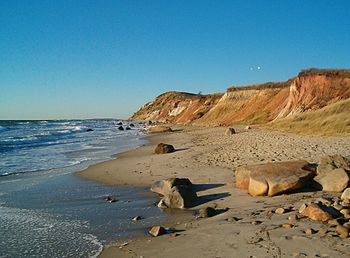 The Gay Head cliffs in Martha's Vineyard consist almost entirely of clay and have long been a sacred spot for the Wampanoag. (Photo credit: Wikipedia)