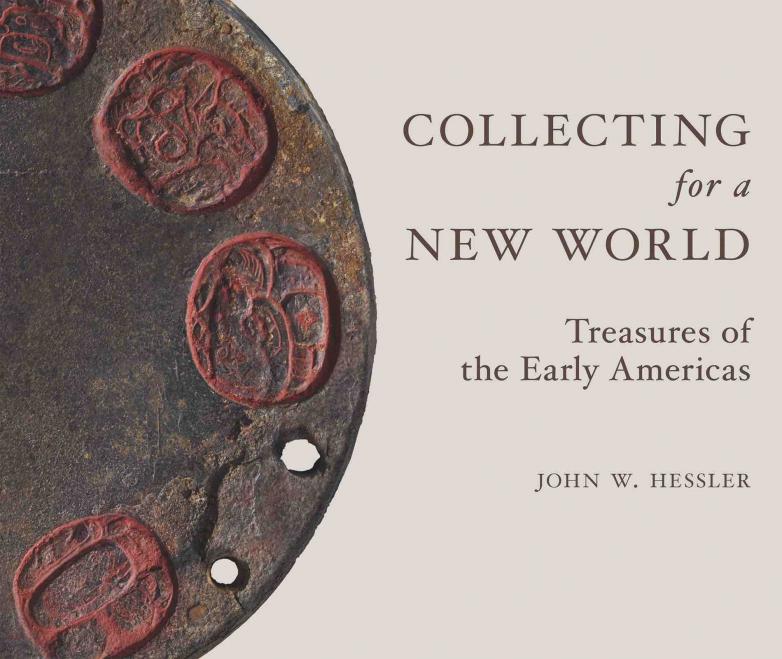 Collecting for a New World, published by D Giles Limited, London, in association with the Library of Congress, explores the story of the early Americas through treasures at the Library. The new book is a companion to the exhibition "Exploring the Early Americas."

Washington, D.C. -- A new book explores the history of the early Americas — a story of before and after, defined and divided by the pivotal moment of contact, in 1492, between Europeans and the indigenous cultures of the New World — told through the collection of early American treasures in the Library of Congress.

On the European side, this is a tale of exploration, high-stakes treasure seeking and conquest. For indigenous Americans — including the Maya, the Nahua, the Taíno, and the Wari — it is the beginning of the end, a violent saga of disease, enslavement, and the loss of languages and rituals.

Collecting for a New World, published by D Giles Limited, London, in association with the Library of Congress, relates these encounters through vivid illustrations and interpretive descriptions of more than 60 rare and priceless items.

In describing for the first time the journeys of archaeological objects, paintings, maps, rare books and manuscripts — via African shipwrecks, secret meetings on airstrips, discoveries in castle libraries and journeys into unknown archaeological sites hidden deep in the jungles of Guatemala — curator John Hessler reveals the role played by private collectors, whose knowledge, vision, and in many cases, philanthropy, contribute so significantly to the collective understanding and interpretation of history and culture.

Highlights of the book include many masterpieces of pre-Columbian ceramics, priceless jade engravings and gold objects, textiles that have survived the ravages of centuries in the mountains of Peru, and rare manuscripts written in indigenous languages. Reproduced in dramatic fashion and featuring the photography of Lee Ewing, these images bring to life the Americas before the arrival of Columbus. Items from the post-contact period include some of the rarest manuscripts written in Nahuatl, or the language of the Aztecs, like the Oztoticpac Lands map, and the recently acquired priceless Codex Quetzalecatzin.

When not searching through Maya ruins in Central America, climbing in the Alps or mountain biking through jungles, Hessler is the curator of the Jay I. Kislak Collection of the Archaeology and History of the Early Americas and a specialist in computational geography and geographic information science at the Library of Congress. The founder of the Topology Lab for Virtual Geographic Environments, his current research focuses on the use of advanced computer vision and three-dimensional modeling to solve complex problems in archaeological and cultural heritage preservation. The lab is currently working on a project that uses Markov Random Field methods, to computationally and virtually reconstruct ancient pottery from assemblages found in archaeological context.

Hessler is the author of more than 100 articles and books, including MAP: Exploring the World (2015), and his research and writing has been featured in many national media outlets.

Collecting for a New World is a companion to the Library of Congress exhibition Exploring the Early Americas. The 176-page book features 100 color illustrations and will be published Nov. 12. It is available in hardcover ($30) or in paperback ($20) from the Library of Congress Shop, 10 First St. S.E., Washington, D.C., https://library-of-congress-shop.myshopify.com/. The hardcover edition is available through book retailers worldwide.

The book was made possible by a gift from the Jay I. Kislak Foundation.