Talbot Publishing is pleased to announce the publication of an important new title: Until The Habit of a Judge, there has never been a book that offers a comprehensive history of Judges’ robes and court attire in England and Wales, and its adoption in Australian courts since colonisation. Richly illustrated with hundreds of colour images dating from the 12th century to the present, The Habit of a Judge invitingly portrays the fascinating world of judicial and legal dress. 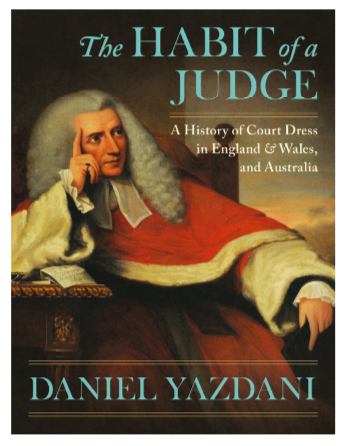 ADVANCE PRAISE
“British cartoonists still portray judges sitting in court wearing full-bottomed wigs. In fact, those wigs are worn only on ceremonial occasions. And even the shorter “bench wig” worn with traditional robes has now largely been discarded in favor of a bareheaded look with a simple zippered black shift worn over jeans and T-shirt -- or nothing at all. With the aid of over 300 illustrations, Daniel Yazdani painstakingly guides the reader through seven centuries of changing judicial and legal fashions.”
DR. MICHAEL ARNHEIM English Barrister, Sometime Fellow of St John’s College, Cambridge, author of U.S. Constitution for Dummies, 2nd edition, and other titles

“Judicial costume, just as courthouse and courtroom architecture, symbolizes the foundations of a legal system, the position of a judge in the judicial hierarchy and vis-à-vis the general public. This volume superbly documents the English tradition of judicial costume and its impact in the antipodes, including jurisdictional variations at regional and local levels. Beautifully illustrated, thoroughly researched, this is a welcome addition to a slim literature on the subject and a significant contribution to comparative Anglo-American legal history.”
WILLIAM E. BUTLER Emeritus Professor of Comparative Law, University College London; John Edward Fowler Distinguished Professor of Law, Dickinson Law, Penn State University

“This astonishing collection of images from rare sources presents the definitive history of court attire in common law countries. Accompanied by an erudite commentary, the spectacular colored plates are not only a delight to peruse, but also a unique reference that shows how fashion and symbolism have inspired respect for the judicial process.”
THOMAS LUND Author, The Creation of the Common Law: The Medieval Year Books Deciphered

“Daniel Yazdani reminds us that whenever judges in the common law tradition have delivered their solemn judgments, smirked their witty comments, and posed their penetrating questions, they have been wearing robes of the brightest colors, lined with fur and splendid in appearance. Probably meant originally to awe the public, these costumes now principally impress upon their wearers the independence, the tradition, and the majestic, daunting responsibility of judicial office. Every feature of judges’ and lawyers’ dress is explained in this profusely illustrated volume, along with symbolic meanings attached through the centuries.”
DAVID J. SEIPP Boston University School of Law

THE AUTHOR
DANIEL YAZDANI is a practising lawyer from Western Australia. He is also a sessional law tutor at The University of Western Australia, has published a number of articles in the Australian Property Law Journal, and is a contributor to the fifth edition of the LexisNexis Concise Australian Legal Dictionary.