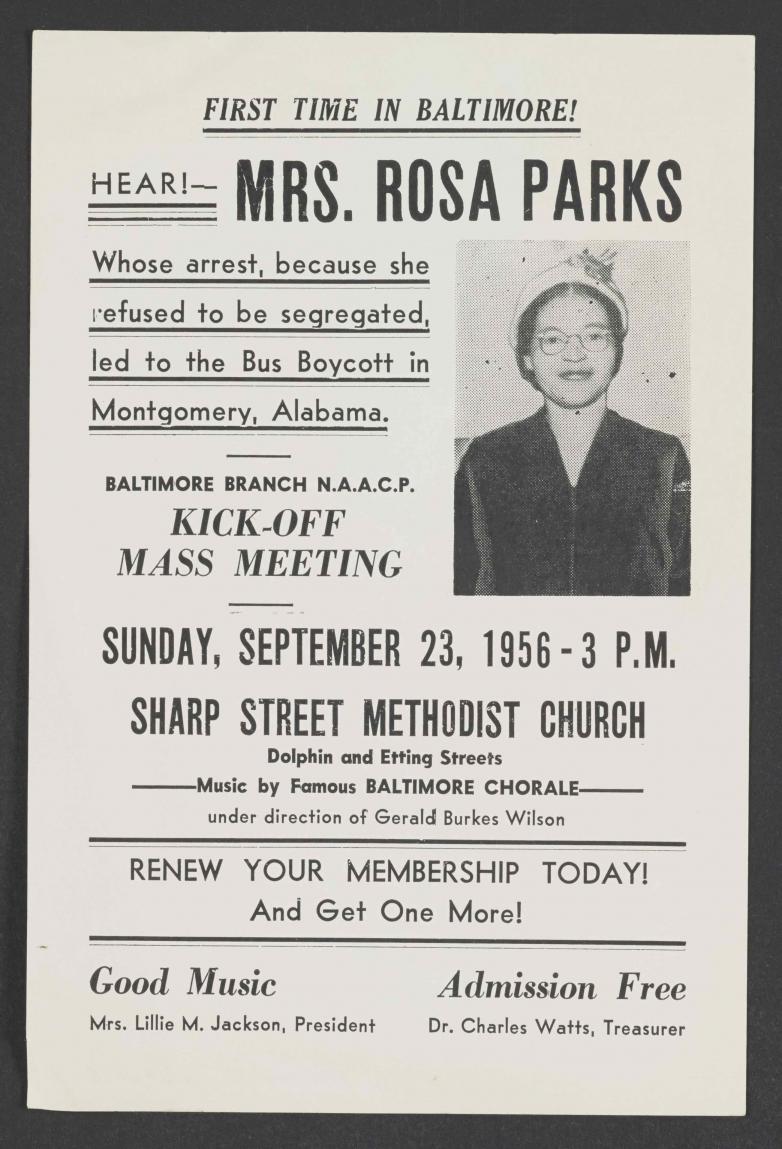 Courtesy of the Manuscript Division, Library of Congress

A flyer from 1956 is part of the Rosa Parks Papers.

Washington, D.C. — By the People, the Library of Congress’ crowdsourced transcription project powered by volunteers across the country is launching a campaign to transcribe Rosa Parks’ personal papers to make them more searchable and accessible online, including many items featured in the exhibition, Rosa Parks: In Her Own Words, starting today, the 107th anniversary of her birth.

Through By the People, anyone can explore, transcribe and tag digitized Library collections through open-source software developed by the Library to give all Americans new ways to connect to the treasures the Library of Congress holds. Anyone can contribute through the project website at crowd.loc.gov.

“Inviting, including and honoring the contributions of people from every walk of life is such a fitting way to honor Rosa Parks,” said Librarian of Congress Carla Hayden. “By the People is all about individuals exploring, reading and understanding for themselves the significance of each item we have. These items are just as much about the day-to-day experience of one woman as they are about a world-changing civil rights movement, and that’s why we’re thrilled to invite everyone to join this project.”

Participants will learn about the relationships and events that shaped Rosa Parks’ lifetime of activism, her life as an individual and her experiences as an icon of the civil rights movement. Available for transcription are notes and fragmentary writings from the Montgomery Bus Boycott. Through powerful prose, these pages reveal a woman who was strong, courageous, clear-eyed and grounded in her core ethical beliefs, but not immune to pain inflicted by racial discrimination. The campaign also includes programs, invitations, flyers and other publicity material from Parks' ‎speaking engagements and events, demonstrating the evolving way Parks was remembered and honored by the American public.

Also available for transcription are letters to and from Parks’ mother, Leona McCauley; letters from her brother, Sylvester; a poignant letter from her father, James, and a large selection of letters to her husband, Raymond. Living apart as they looked for paying work in 1957 and 1958, Raymond and Rosa Parks coped at a distance with the fallout from her bus protest and the Montgomery Bus Boycott. Participants can read for themselves loving, compassionate letters that reveal who Rosa Parks was as a woman. Other items, including a unique pancake recipe, shed light Parks’s day-to-day life.

Since By the People launched in October 2018, more than 12,000 volunteers have completed over 50,000 transcriptions. More than 8,000 have already been published on loc.gov. By the People transcriptions will make letters to President Abraham Lincoln, writings of suffragists, reports of baseball scout Branch Rickey, notebooks belonging to folklorist Alan Lomax, and Clara Barton’s diaries keyword searchable by the public online for the first time. Transcriptions also open these documents up to be read by individuals who utilize accessibility technologies like screen readers.