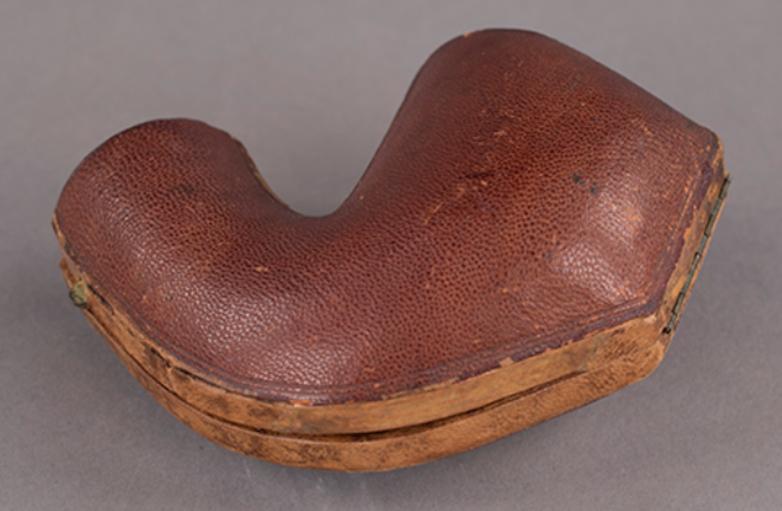 The exterior leather covering of the pipe case was stabilized and treated.

Thanks to a Museums for America Grant awarded by the Institute of Museum and Library Services (IMLS), seven Clemens-original objects in The Mark Twain House & Museum’s collection have undergone professional conservation treatment at the Williamstown Art Conservation and Preservation Center. Objects included three chairs, a bench chest, a comb, a walking stick, and a pipe case.

These objects were chosen for this project because of their importance to the study of Mark Twain and his era, and their current condition. It was critical to have the seven objects treated, so that they will be preserved for the future and the Museum can make them accessible to the public and for scholarly research. Conservation treatments included replacing or repairing broken parts, cleaning, and stabilization of materials.

All have direct connections to Samuel Clemens, more popularly known by his pen name “Mark Twain,” and provide valuable and unique insight into Twain’s life and work. Mark Twain was, of course, one of America’s most important writers. The years he and his family spent in Hartford were famously dubbed the “happiest years” of his life. These furnishings and personal belongings help the museum interpret the lives of the Clemens family and their time here in Hartford.

The three pink chairs are a part of the original furniture set purchased by Sam and Olivia Clemens to entertain guests at their Buffalo and Hartford houses. The chairs accompanied by the matching sofa are on display in the drawing room of the Hartford home. In a 1959 letter to Robert Schutz, Clara Clemens recalled the furniture saying it was “designed to harmonize with the walls I remember as beautifully delicate in what more recently have been called pastelle shades of pale blue and salmon rose.” One chair had a finial reattached, one had a medallion reattached, and all three were cleaned and waxed.

This elaborately carved bench chest with a hinged seat is original to the Hartford home. During the Clemens era the bench probably sat downstairs in the Front Hall where the door to the mahogany guest room now is, but today it is displayed on the third floor landing of the house. The bench remained with the family after they left Hartford and was used by Sam Clemens in his Stormfield house in Redding, CT. After his death, Clara Clemens owned the bench until 1951. The Museum purchased the bench in 1961 for display in the house.

The walking stick used by Sam Clemens is an ebonized wood walking stick with a handgrip in the shape of a dog’s head. The broken stick was repaired and the missing crystal eye replaced.

The pipe case accompanies a meerschaum pipe purchased by the Clemenses in Vienna. The exterior leather covering of the pipe case was stabilized and treated.

Lastly, the silver Tiffany & Co. hair comb was owned by Olivia Clemens. The broken teeth were repaired and the whole comb was treated to prevent further tarnish.