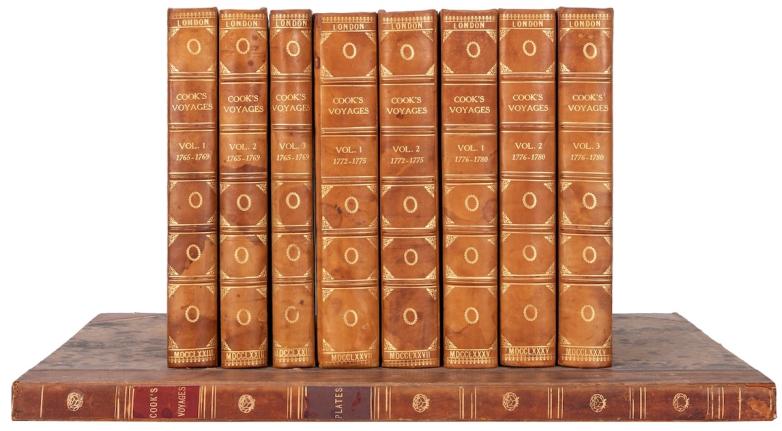 Chicago — Potter & Potter Auctions is pleased to announce this nearly 600-lot sale to be held on Thursday, October 20th starting at 10am. The event will be held online and live streamed, with a limited number of bidders physically allowed in the gallery as determined by current Illinois public health attendance guidelines. Please call the auction house, located at 5001 W Belmont Avenue in Chicago, at 773-472-1442 to reserve seats. Bidding will take place through Potter & Potter's website, which can be found at www.potterauctions.com. Phone and absentee bids are also welcome. All items are available for in-person preview, by appointment only.

·       Lot #468, a signed copy of James Joyce's (1882–1941) Ulysses, is estimated at $50,000-60,000. It was published in London in 1937 by John Lane the Bodley Head. This example is the first English edition printed in England, a limited issue, and is one of 100 copies on mould–made paper signed by Joyce (from a total edition of 1000 copies; this copy is unnumbered). This copy was reserved for presentation by the author, with the words “Presentation Copy” inscribed below the limitation. According to our experts, this Bodley Head edition is arguably the most handsome edition of Joyce’s masterpiece ever published.

·       Lot #26, an early edition of Jack London's (1876-1916) The Call of the Wild, is estimated at $10,000-15,000. It was published in New York by The Macmillan Co. in 1905. This example is illustrated by Philip P. Goodwin and Charles Livingston Bull, with decorations by Charles Edward Hooper. It is Inscribed by London presumably to the political activist Emma Goldman (1869–1940): “Dear Emma– never mind the new San Francisco; here’s to the new library. Affectionately yours, Jack London. Glen Ellen, Calif. June 15, 1906." The inscription references the aftermath of the 1906 San Francisco earthquake that destroyed most of the city, including the Cecil H. Green Library at Stanford University. London had a strong connection with the University, giving lectures on literature and socialism there. This lot also includes a rare original photograph of Buck, the canine protagonist of The Call of the Wild, signed by London.

·       Lot #382, a signed, first edition, limited issue of Aleister Crowley's (1875–1947) The Winged Beetle, is estimated at $10,000-15,000. It was privately printed in London in 1910. This example is number 1 of 50 from a total edition of 350 and is Crowley’s personal copy. It is heavily annotated in his hand including 39 poems with notes identifying where and when he wrote the poem and to whom it was about. According to literature scholar Martin Starr, “The first edition is scarcer than its limitation implies; a circumstance explained by its non–durable binding and the loss to flood damage of nearly a third of the print run."

·       Lot #44, a copy of Robert Browning's (1812–1889) Poetical Works gifted to Ernest Shackleton (1874–1922), is estimated at $40,000-60,000. This two volumes in one publication was printed in 1906 in London by Smith and Elder. This absolute rarity was presented to Shackleton and the officers of the Nimrod by a member of the royal geographical society, and is inscribed on the front flyleaf: “To Lieut. E.H. Shackleton, & the Officers of the ‘Nimrod’, with very best wishes for a happy & successful voyage, from Agnes S. Fox, September 1907.” Shackleton took this book on his expedition and he had it "in the hut under the Polar night." The book also features additional motivational quotes written on its flyleaves to help guide Shackleton on his voyages to the South Pole.

·       Lot #558, Lord Alfred Tennyson's (1809-1892) The Charge of the Light Brigade, is estimated at $15,000-25,000. This particular copy - bound in full crimson morocco - was printed in London on August 8, 1855 specifically at the request of Tennyson for soldiers serving at the siege of Sevastopol. It is a first separate edition, limited issue, and one of 1,000 copies published. This association copy is signed by Captain John Walrond Clarke of the 10th Royal Hussars. Clarke's regiment was involved in numerous campaigns throughout the Siege of Sevastopol during the Crimean War.

Also on offer are world class selections of antique to ancient literature.

·       Lot #234, Aristotle's (384–322 B.C.E.) Aristotelis Opera parts one and two, is estimated at $20,000-30,000. These two Greek language volumes were edited by Aldus and others and printed in Venice by Aldus Manutius, in November, 1495 through February, 1498. Part one is Organon, or Logic, while part two is Natural Philosophy. Each volume is bound in antiqued modern calf with contemporary red edges and has its pages decorated with woodcut floral and interlace headpieces, Greek initials, and woodcut diagrams.

·       Lot #242, John Dryden's (1631–1700) Fables Ancient and Modern; translated into verse from Homer, Ovid, Boccace, & Chaucer: with Original Poems, is estimated at $4,000-6,000. This first edition, large paper copy was printed in London by John Tonson in 1700. It is bound in full contemporary red goatskin paneled in gilt. This example has provenance to George John Spencer, 2nd Earl Spencer (1758–1834), a prominent British politician and recognized bibliophile and literature scholar.  According to bibliographer and historian Seymour De Ricci, Spencer was, "...one of the greatest book–collectors, not only in English history, but even in the history of the world.”

·       Lot #272, The Poems of William Shakespeare (1564–1616), is estimated at $12,000-15,000. This book was edited by Frederick S. Ellis and published in Hammersmith by William Morris for the Kelmscott Press in 1893. It is a limited edition, one of 500 copies printed on Flower paper, of a total edition of 510. This exquisite example is handsomely bound in fine leather and elaborately decorated with pontillé design gilt, tan levant endpapers, additional hand marbled endpapers, and top edge gilt. It includes its original full green niger folding box decorated with matching Art Nouveau lettering.

This event comes full circle with other noteworthy publications, including important first editions from groundbreaking authors.

According to Christopher Brink, Potter & Potter Auctions' Director of Fine Books and Manuscripts, "This monumental sale spotlights an already banner year for our Department. We have brought to market a wide selection of important association copies, first editions, and items never before offered at auction. This is an event that collectors will not want to miss."