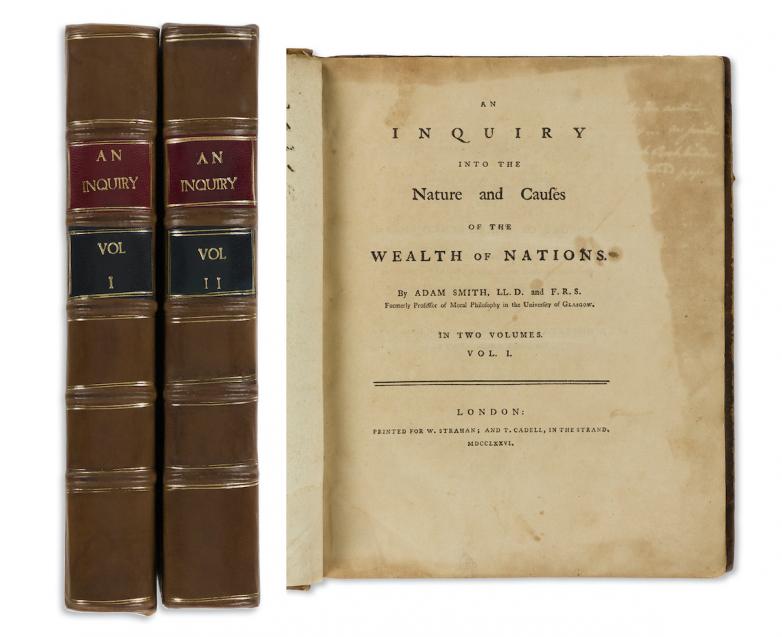 A first edition of Adam Smith’s An Inquiry into the Nature and Causes of the Wealth of Nations sold to a private collector for $125,000.

A strong offering of special early printed books and manuscripts led the sale by value. Senior Specialist Devon Eastland, who joined Swann early in 2020, noted, “First editions of Adam Smith's Wealth of Nations and Johnson's Dictionary, illuminated Books of Hours, incunabula, and other book collecting classics are still toplining today's market in early books, but new areas of collecting also yield competitive bidding and high hammer prices.” Smith’s An Inquiry into the Nature and Causes of the Wealth of Nations, 1776, descended from William Alexander and bearing his inscription, brought $125,000, besting a $70,000 to $90,000 estimate. Other strong results include a fifteenth-century illuminated Book of Hours in Flemish earning $23,750, and Gerrit de Veer's 1598 illustrated journal of ill-fated Arctic adventures with $27,500.

“The association copy of Kenelm Digby's Mathematical Magick did an impressive auction room trick, selling for $5,000 on a $600 to $800 estimate range. What may have persuaded bidders to keep their paddles in the air was a Shakespearean association. Manuscripts appeal to collectors and dealers alike for their beauty, the importance of content, and uniqueness,” concluded Eastland of the selection.

The literature portion of the sale proved successful with a 1938 sketchbook for Snow White and the Seven Dwarfs, signed by Walt Disney with 12 tipped-in color plates. The classic children’s tale brought a record for the issue at $22,500. A deluxe limited edition of Jack Kerouac’s Doctor Sax, 1959, brought a record for one of the 26 lettered signed copies at $9,100. Also of note was a copy of Ulysses, 1922, by James Joyce, number 708 of 750 copies on handmade paper, which sold for $13,750.

Art books saw impressive results with the deluxe issue of Salvador Dalí’s 1969 Alice’s Adventures in Wonderland by Lewis Carroll with a signed frontispiece and the extra suite of plates atop the offering, at $16,250. Further works of note included Robert Rey’s Estampes, a 1950 portfolio with complete text and 12 color wood engravings and the decomposition color proof of the Laurencin, with $14,300, and Otto Czeschka’s 1907 Kabarett Fledermaus, which included four color plates designed by Oskar Kokoschka, Berthold Löffler, and two by Fritz Zeyman, with $10,000.

Autograph highlights featured political figures, including over 50 autographs by Napoléon I and member of his family in a copy of Memoirs of Napoleon Bonaparte, 1885, by Louis Antoine Fauvelet de Bourrienne, which brought $27,500; a 1788 letter signed by John Adams to Theophilus Parsons, requesting that he not be selected as candidate for Senator saw $10,000; and an 1835 letter signed by Andrew Jackson, as President, to Thomas K. Gordon justifying self-defense against censure by Congress earned $11,875. Additional autographs of note included a photograph signed and inscribed by George Gershwin with an autograph musical quotation from An American in Paris, at $10,000, and a copy of Lady and the Tramp, 1953, by Ward Green, signed by Walt Disney, at $7,250.