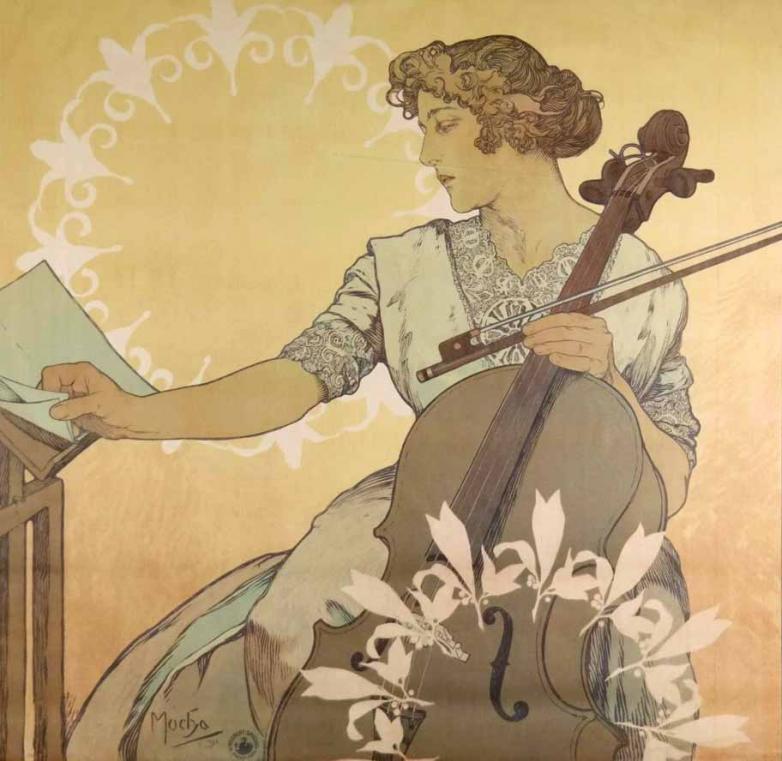 Bidders are sure to be pleased by the wide array of etchings, prints, portfolios and serigraphs by noted artists, as well as the 40-plus posters that include examples with vintage railroad and maritime themes, and desirable pieces by Alphonse Mucha and Francisco Tamagno. Additionally, there are advertising posters by Jules Chéret, Lucien LeFevre and Henri LeMonnier.

A complete set of six etchings by Pablo Picasso (Spanish, 1881-1973), titled Lysistrata (1934), carries a presale estimate of $10,000-$15,000. The set is from the deluxe suite, with wide margins, and is edition 83 of 150. Each etching is signed in pencil, lower left. Lysistrata was printed by Roger Lacouriere (Paris) and published by The Limited Editions Club (New York).

A lithograph poster by Jules Chéret (French, 1836-1932), Cosmydor Savon (1891), is expected to bring $2,000-$3,000. In the poster, published in Paris by Imp. Chaix, Chéret pays close attention to the subject’s elegant striped dress, which resembles the dress in his poster Librairie Ed. Sagot. Chéret was a renowned master of Belle Epoque poster art and has been called the father of the modern poster.

A circa-1930s linocut in colors on soft Japan wove paper by Frances Gearhart (American 1869-1959), titled November Textiles, carries an estimate of $2,000-$3,000. The print is artist-signed and titled and is from the collection of printmaker Phyllis Cohen. A copy was exhibited at a major Gearhart retrospective in Pasadena, Calif. (2009-2010), and was used as cover art for the exhibition’s catalog.

An Alphonse Mucha (Czech, 1860-1939) lithographed color poster of a woman cellist is artist-signed in the plate and titled Zdenka Cerny. The 1913 lithograph is Impression V. by Neubert, Praha (Prague). “Mucha was a painter, illustrator and graphic artist who lived in Paris during the Art Nouveau period and gained fame from his stylized renderings of Sarah Bernhardt,” said Catherine Payling, Director of Waverly Rare Books. “His posters are highly sought after and always attract a following at auction. We expect his depiction of Zdenka Cerny – who was billed as the ‘greatest Bohemian violoncellist’ – to sell for $1,500-$2,500.”

A woodcut in color by Edna Boies Hopkins (American, 1872-1937), titled Bud (1906), is signed in pencil and displays the artist’s stamp at lower right. Hopkins was an American artist who made woodblock prints based on Japanese ukiyo-e art and Arthur Wesley Dowd’s formula that combined the elements of notan (light and dark in harmony), line, and color. Hopkins’ woodcut Bud was, in fact, included in the 1991 Herbert F. Johnson Museum of Art (Cornell University) exhibition titled “Arthur Wesley Dow and His Influence.” Auction estimate: $1,000-$2,000

A lithograph in colors by Salvador Dali (Spanish, 1904-1989), titled Flowers and Fruit (1971), comes from the Currier & Ives series Landscape, Fruit and Flowers, of the same year. The piece, a collage on wove paper, is editioned lower left and artist-signed in pencil at lower right. It is Dali’s homage to the Currier & Ives print created by Frances Flora Bond Palmer and should sell for $1,000-$2,000.

A 1965 woodblock print in colors on faux Japan paper by Walter Henry Williams (American, 1920-1998), titled Cock Fight #3 is also expected to reach $1,000-$2,000. It is pencil-signed, titled and editioned 166/210. Williams was an African American artist, painter and printmaker best known for dreamlike nostalgic images harkening to his rural Southern childhood.

Waverly Rare Books’ July 18 auction will begin at 6 p.m. Previews will be held at the gallery Monday through Thursday, July 15-18, from 10-6 Eastern time. For additional information about any item in the auction, call 703-532-5632, ext. 575; or e-mail [email protected] View the online catalog and register to bid absentee or live online, at https://www.LiveAuctioneers.com. Visit Waverly online at http://www.quinnsauction.com. Waverly is always accepting consignments for future auctions and welcomes enquiries.