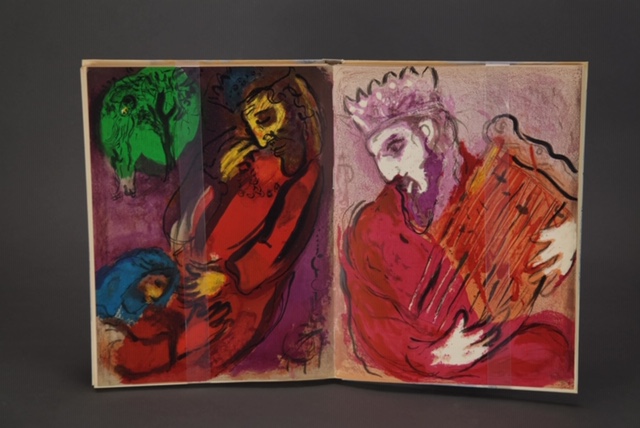 Falls Church, VA -- Waverly Rare Books, a division of Quinn’s Auction Galleries, will present a special Collectors Series Judaica auction on May 2 featuring historically important books, art, scrolls and artifacts. A prized selection of items comes from the estate of Rabbi Joshua O. Haberman (1919-2017), who had strong ties to the Washington, D.C., area.

Born in Austria, Rabbi Haberman was attending a Jewish rabbinical seminary in Europe when World War II broke out. He left for the United States and went on to spend 18 rewarding years as rabbi for the Washington Hebrew Congregation. His collection includes a fascinating variety of books on Judaism, Jewish history, literature, theology and 19th-century German philosophy.

Other featured items in the Rabbi Haberman collection include Hebrew prayer books, two 17th-century bibles printed in Amsterdam, a copy of Marc Chagall’s Illustrations for the Bible, the first publication of an essay by Edmund Husserl titled The Crisis of European Sciences. Devotional objects include Rabbi Haberman’s gragger, shofar, Scroll of Esther, and a pair of menorahs. Also coming to auction from the Haberman collection, and other consignors, are paintings and prints by Afroyim Soshana, Yaacov Agam, Caspar Mine, and Yosi Stern.

A non-kosher Torah scroll originating from Eastern Europe is complete with modern rollers and mantel, and has sections that vary in age from earlier to more modern. It has an estimate of $4,000-$6,000. Also, a copy of the first American edition of Chagall’s Illustrations for the Bible (1956, Harcourt, Brace & Co., N.Y.), in a very rare dustjacket and featuring 17 lithographs in color (including the title page, plus 12 in black and white), should hammer for $1,500-$2,500.

A heavy wove construction artwork with serigraph by Yaacov Agam (Israeli, b. 1928-), titled Tribute of the People of Israel to the People of the United States (1985), #230 from an edition of 900, signed in marker and editioned in pencil, should hit $400-$600; and two signed works by Afroyim Soshana (Austrian, 1927-2015), both watercolor and gouache on paper and depicting the sin and impending destruction of Sodom and Gomorrah, carry an estimate of $300-$500.

A 20th-century oil-on-board artwork titled Portrait of a Rabbi by Caspar Mine (German-French, b. 1905-), is artist-signed and framed with a gallery label on verso. Its pre-sale estimate is $300-$500. Also, a papier-mâché, acrylic and wire sculpture depicting King David, created by the 20th-century American artist Phillip Ratner, is signed in gold at lower left and comes to auction with a $200-$400 estimate.

Also from the Haberman collection, two kinetic brass menorahs with removable, rotatable arms will be offered as one lot with a $100-$150 estimate. An ideal placement might be atop Rabbi Haberman’s personal desk. Made by Sligh Furniture, the leather-topped kneehole desk has three upper drawers with brass handles over four lower drawers (two double drawers). Together with the chair Rabbi Haberman chose to use with the desk, the duo is paired at auction with an estimate of $200-$300. A wooden gragger for use during Purim, bearing Haberman’s initials, lotted together with another gragger and shofar, come to auction with an $80-$100 estimate.

Waverly Rare Books’ 171-lot specialty auction will be conducted live at Quinn’s Auction Galleries, 360 South Washington Street in Falls Church, Virginia, with all forms of bidding available. Bid absentee or live via the Internet at www.LiveAuctioneers.com. Previews will be held Monday, April 29 from 10-5, and Tuesday-Thursday, April 30-May 2, from 10-6.

For additional information about any item in the Thursday, May 2 auction, to leave an absentee bid or to reserve a phone line on auction day, call 703-532-5632, extension 575; or e-mail [email protected] Visit them online at http://www.quinnsauction.com. Waverly Rare Books is always accepting consignments for future auctions.