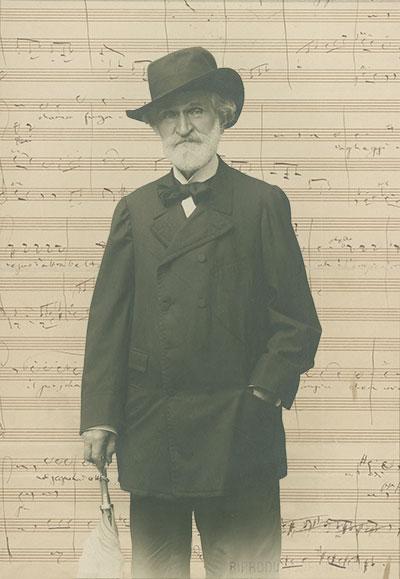 New York/Milan – After Aida in 1871, except for occasional projects, Giuseppe Verdi (1813–1901), Italy’s pre-eminent composer, retired from opera at the age of 58. This, however, did not prevent constant pleas from his publisher and future librettist for the maestro to return to the operatic stage. Reluctantly coaxed out of retirement, Verdi composed what would become the crowning achievements of his career: Otello and Falstaff. From September 6, 2019 to January 5, 2020, the Morgan Library & Museum will present highlights from the Milan-based, Bertelsmann-owned Ricordi Archive, offering visitors insight into the production of these two operas, as well as the complex enterprise of bringing an opera to life. Based on The Enterprise of Opera: Verdi. Boito. Ricordi, created by Bertelsmann/Ricordi and curated by Gabriele Dotto, Verdi: Creating Otello and Falstaff—Highlights from the Ricordi Archive traces the genesis and realization of Otello and Falstaff through original scores, libretti, selected correspondence, set and costume designs, and more, marking the first exhibition of these rare documents and artifacts in the United States.

Giuseppe Verdi—alongside Gaetano Donizetti (1791–1848), Gioachino Rossini (1792–1868), Vincenzo Bellini (1801–1835), and Giacomo Puccini (1858–1924) — is one of the five great names of nineteenth-century Italian opera, whose works were published by Casa Ricordi and documented in its Archivio Storico Ricordi. The Ricordi Archive is regarded as one of the world’s foremost privately owned music collections. In this exhibition, treasures from the Archive are complemented by rarities from the Morgan’s collection, including early editions of texts by William Shakespeare, whose dramaturgical material served as the basis for Verdi’s last two operas, in addition to rare editions of scores and libretti, contemporary publicity material, an autograph letter from Verdi’s wife, and autograph sketches for Otello.

This combination of materials from the two institutions, under the guidance of curators Fran Barulich, Mary Flagler Cary Curator and Department Head of Music Manuscripts and Printed Music at the Morgan, and Gabriele Dotto, Ricordi Archive Director of Scholarly Initiatives, gives visitors a unique opportunity to gain firsthand insights into the European cultural scene of the late nineteenth century. A number of important loans from the National Gallery of Canada, Yale Center for British Art, and the Clark Art Institute help complete the story. The supporting program of the exhibition includes a concert with Verdi arias, a screening of Franco Zeffirelli’s Otello, and a discussion featuring experts from the Ricordi Archive.

Colin B. Bailey, Director of the Morgan Library & Museum, said: “We are delighted with the support of Marina Kellen French and the Anna-Maria and Stephen Kellen Foundation to present these highlights from the Ricordi Archive, showing how Italy’s pre-eminent composer shaped what would become two of his crowning achievements, Otello and Falstaff. A selection of set designs, costumes from Milan’s Teatro alla Scala, autograph manuscripts, contracts, publications, publicity, video excerpts from recent productions, and objects from the Morgan’s collection enables visitors to experience the tremendous collaborative efforts that go into an operatic production.”

Thomas Rabe, Chairman and CEO of Bertelsmann, said: “The name Ricordi stands for two hundred years of Italian opera and music history. As the owners of the Ricordi Archive, we are very aware of the importance of this European cultural asset and take responsibility for its sustained preservation, care, and development. Exhibitions like the one in New York, in partnership with the Morgan Library, are a great opportunity to keep the creative work of earlier generations alive and to reach audiences beyond the musicological community.”

The richly textured exhibition Verdi: Creating Otello and Falstaff—Highlights from the Ricordi Archive illuminates the genesis and realization of the two world-famous operas, from initial deliberations about commissioning the celebrated composer to their premieres. In doing so, it provides a deep insight into the work of three geniuses who formed a kind of business partnership. Although the idea for Otello first arose in 1879, when Verdi was 65, he did not begin to work on the project in earnest until he was in his 70s, after his Milanese publisher Giulio Ricordi (1840–1912) teamed up with the librettist Arrigo Boito (1842–1918) to develop a diplomatic strategy for luring “the old bear” out of retirement. Their plan worked. Applying his mature compositional skills to two brilliant libretti by Boito, Verdi created two of the greatest operas ever composed. There was a hiatus of almost sixteen years between the 1887 premiere of Otello and the 1871 premiere of Aida; Falstaff premiered in 1893. Giulio Ricordi was ultimately responsible for marketing and managing both large-scale productions.

The Ricordi Archive houses a total of some 7,800 original scores from more than 600 operas and hundreds of other compositions; approximately 10,000 libretti; an extensive iconographic collection with precious original stage and costume designs; and a vast amount of historical business correspondence of Casa Ricordi. Founded in 1808 by Giovanni Ricordi in Milan, the Italian music publisher had a fundamental influence on the cultural history of Italy and Europe. Bertelsmann, the international media company that also includes the BMG music group and the New York–based trade publishing group Penguin Random House, bought Casa Ricordi in 1994, but sold the company and its music rights in subsequent years. Only the associated Ricordi Archive remained within the group. Since then, Bertelsmann has had the archived items comprehensively indexed, digitized, and in many cases restored. Bertelsmann also organizes concerts and exhibitions to keep Casa Ricordi’s cultural heritage alive and make it accessible to as wide a public as possible.