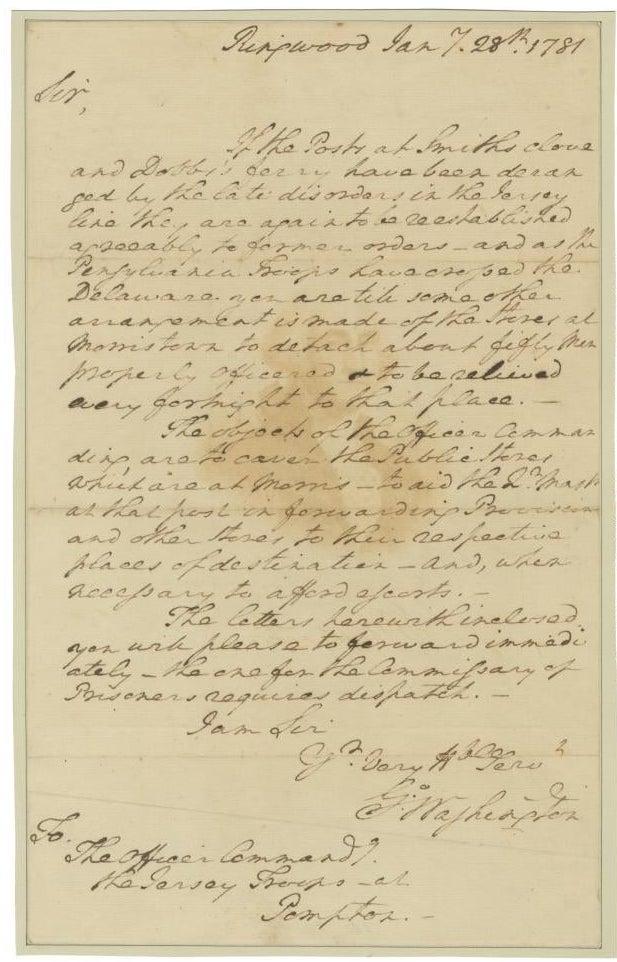 Letter penned and signed in 1781 by then-General George Washington as Commander in Chief of the Continental Army, saying his troops “have crossed the Delaware.” Est. $50,000-60,000.

Westport, CT – A letter handwritten and signed by George Washington, a Walt Disney twice-signed stock certificate, JFK’s official schedule from the day of his assassination in 1963, a document signed by Russian czar Peter I, and a large Apollo 11 lunar landing photo signed by Neil Armstrong are just a few highlight lots in University Archives’ October 2nd online auction.

The auction will begin at 10:30 am Eastern time. Live bidding has already been posted online and bidding is available via LiveAuctioneers.com, Invaluable.com and Auctionzip.com. The auction is packed with an important selection of autographed documents, manuscripts, books and photos – 240 lots in all. Folks can visit the website and browse at www.UniversityArchives.com.

“We have a massive amount of material relating to foreign leaders, particularly Russian,” said John Reznikoff, president and owner of University Archives. “There’s a long list of items signed by Romanov emperors and empresses. The sale is also strong in the history of American business and finance, with lots of documents that pertain to tycoons, bankers and speculators.”

In the early American history category, the sale features Civil War battlefield maps and materials relating to United States presidents and their wives. Aviation and space has items pertaining to Charles Lindbergh, Orville Wright and Robert E. Peary. Collectors of literary, artistic, and musical figures, as well as sports, entertainment and crime memorabilia, are almost certain to find what they’re looking for.

The letter penned and signed by then-General George Washington as Commander in Chief of the Continental Army, dated Jan. 28, 1781 and addressed “to the Officer Commanding the Jersey Troops at Pompton”, is historically important because he writes that his troops “have crossed the Delaware” – a reference to one of the key moments in American history (est. $50,000-$60,000).

The Walt Disney twice-signed, pre-IPO stock certificate for Walt Disney Incorporated, one of only six such certificates in existence, is expected to climb to $26,000-$28,000 (it previously sold at auction in 2002 for $26,800). The certificate, in the amount of 142 ½ shares of “Wed Enterprises, Inc.” (formerly Walt Disney, Inc.) is from 1955, the year that Disneyland opened.

The color photo inscribed and signed by Apollo 11 astronaut Neil Armstrong is 13 ¾ inches by 10 ¾ inches (less frame) and shows fellow astronaut Buzz Aldrin on the moon, standing near the lunar module’s landing gear. Armstrong writes, “To Elton, With sincere thanks for being both one step ahead of us and one step behind us throughout ‘GIANT STEP’”. (est. $5,000-$6,000).

JFK’s official three-page “Schedule of the President, Texas, Nov. 21-22”, dated Nov. 20, 1963, was issued by the Office of the White House Press Secretary and shows changes in red pencil. A second copy, with no red pencil notes, is also included (est. $10,000-$12,000). The schedule is mounted on gray construction paper. It gives a full two-day itinerary for JFK and Mrs. Kennedy.

The two-page letter with five handwritten lines and the signature of Peter the Great (Tsar Peter I of Russia, 1672-1725) is expected to fetch $15,000-$20,000. The letter is in Russian. In it, Peter (or “Piotr”, as he signed it) discusses naval artillery. It was issued from St. Petersburg, Peter’s newly constructed capital, in 1715. The lot includes three vintage portrait engravings of Peter.

Another noteworthy George Washington lot is a letter written by the then-General on June 11, 1783, to Jonathan Trumbull, explaining his request for half pay for life for Revolutionary War officers. It has a pre-sale estimate of $14,000-$15,000. Also, a manuscript document signed by John Witherspoon, a signer of the Declaration of Independence, from 1773. Witherspoon was the then-President of the college that would later become Princeton University (est. $6,000-$8,000).

Another Declaration signer – Joseph Hewes, one of three delegates from North Carolina – is represented in the sale with a one-page signed document from 1765, boasting a perfect, elegant signature (est. $5,000-$6,000). The same estimate has been assigned to a Civil War Battle of Chancellorsville (Va.) set of maps, showing the battlefield situation at 7:30 pm on May 2, 1863, after Stonewall Jackson’s bold flank assault, drawn by the Union surgeon Augustus C. Hamlin.

A single-page autograph letter signed on White House letterhead by Franklin D. Roosevelt, to Norman Davis, President of the Council on Foreign Relations, in which he writes to help his longtime mistress Lucy Mercer’s daughter, boldly signed “FDR”, should reach $8,000-$9,000. Also, a black and white photo of the renowned American architect frank Lloyd Wright, signed and inscribed “To Arthur” by Wright and dated “Aug 12/52”, should sell for $4,000-$5,000.

University Archives has become world-renowned as a go-to source for rare items of this kind. It is actively seeking quality material for future auctions, presenting a rare opportunity for sellers.