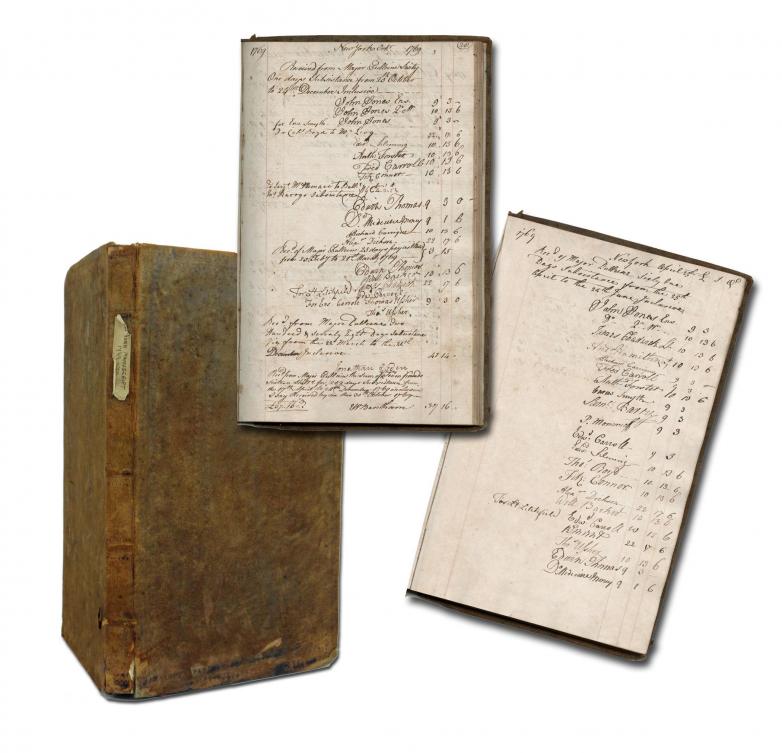 Leather-bound ledger from 1769-1770, a paymaster’s account book from a New York regiment that remained loyal to King George III during the American Revolution. Est. $10,000-12,000.

Westport, CT – A scarce first pressing of the 1963 album With the Beatles, signed by all four members of the group, a two-page letter written around 1895 by French artist Paul Gauguin, an Apollo 11 lunar color photo signed by all three astronauts on the mission, an 1833 copperplate engraving of the Declaration of Independence and a Walt Disney-signed animation cel depicting Mickey Mouse as an Argentine gaucho will all come up for bid on Tuesday, November 5th.

They’re just a few of the expected top lots in a stellar collection of manuscripts, rare books and Apollo-related items to be sold in an online-only auction by University Archives, at 10:30 am Eastern time. Categories include aviation and space, art, music, Americana, science, foreign leaders and royalty, business and finance and more. In all, 264 premier lots will come up for bid.

The catalog has already been posted online and bidding is available via LiveAuctioneers.com, Invaluable.com and Auctionzip.com. Telephone and absentee bids will also be accepted. The auction is packed with an important selection of autographed documents, manuscripts, books and photos. Folks can visit the website and browse the catalog now at www.UniversityArchives.com.

“Attention history lovers and holiday shoppers,” announced John Reznikoff, the president and owner of University Archives. “The November 5th auction represents a remarkable – and affordable – sampling of rare items in many collecting categories. Maybe you can’t afford a genuine artwork by Monet, Degas, Matisse or Gauguin but you can own these artists’ autographed letters for a fraction of the price.”

Reznikoff continued, “Not planning on traveling to the moon anytime soon? Not to worry, you can purchase the autographs of the most famous astronauts and cosmonauts who actually did. Washington, D.C. might be too far away to visit, but you can consider acquiring early engravings of the Declaration of Independence produced by Huntington, Stone, Tyler and Binn instead.”

He added, “Have you ever wanted to visit the Great Pyramids or the Sphinx? Save the airfare and buy an authenticated piece of each. Eager to own mementos from the bygone age of rock ’n roll? How about a Beatles album signed by all four Beatles, Woody Guthrie’s hand-inscribed lyrics, or Buddy Holly’s stage-worn tie clip? We have a huge array of fine holiday gift options like these.”

The first pressing monaural copy of the album With the Beatles (later renamed Meet the Beatles) is signed by all four of the lads from Liverpool and is expected to realize $10,000-$12,000. The album has the misspelled song You Really Gotta Hold On Me on the back album sleeve. With the Beatles was released on November 22, 1963 – the very day President Kennedy was assassinated.

An identical estimate of $10,000-$12,000 has been given to the Apollo 11 lunar photo signed by astronauts Neil Armstrong, Buzz Aldrin and Michael Collins. The color photo – showing Buzz Aldrin gazing at the American flag while standing on the surface of the moon – is beautifully matted and comes with a letter of authenticity from a former employee of NASA. It’s also accompanied by a Letter of Authenticity from Zarelli Space Authentication. Also, a rare black and white photograph depicting six early Russian cosmonauts, signed by all six in Cyrillic along the lower margin (including Russia’s first man in space, Yuri Gagarin), 9 inches by 5 ½ inches, with several certificates of authenticity, should sell for $2,000-$2,400.

The two-page letter handwritten in French and signed by renowned French artist Paul Gauguin (1848-1903), was penned two months before his final departure for Tahiti and right after his split from his wife (who he possibly refers to in the letter as “the little snake”). The letter, with the original envelope, is presented in a handsome mat along with a reproduction of a Gauguin self-portrait (est. $15,000-$17,000).

The copperplate engraving of the Declaration of Independence, printed on thin wove paper in 1833, as the country’s 50th anniversary of independence from Great Britain approached, has an estimate of $15,000-$17,000. It’s imprinted bottom left, “W.J. Stone SC Washn” (William J. Stone for Peter Force, Washington, D.C.) and housed in a frame measuring 32 ¾ inches by 37 ½ inches.

The circa 1940 Walt Disney-signed animation cel with original background art depicting Mickey Mouse as an Argentine gaucho is from the studio’s south-of-the-border features – the result of a goodwill tour of Latin America by Disney himself. The limited-edition framed and matted cel, inscribed “To Michael R. Nex, all Best Wishes, Walt Disney,” should rise to $3,000-$3,500.

A one-page letter written and signed by then-President elect Abraham Lincoln, dated Jan. 24, 1861, addressed to Ulysses Doubleday (the brother of baseball’s Abner Doubleday), regarding the tense situation in Charleston’s harbor just three months before the firing on Fort Sumter, is estimated to reach $10,000-$12,000; as is a leather-bound ledger from 1769-1770, signed by over 200 soldiers from the New York 16th Regiment of Foot. It’s a paymaster’s account book from a regiment that would remain loyal to King George III during the American Revolution.

Two lots with roots in France share estimates of $3,000-$3,500 each. The first is a two-page letter written in French and signed by the Impressionist painter Claude Monet (French, 1840-1926), penned in November 1907 to the art critic Felix Feneon, and beautifully matted alongside a color reproduction of one of Monet’s water lily studies. The second is a three-page letter written and signed by Napoleon Bonaparte (1769-1821), also in French, in 1807, regarding the Polish Campaign, War of the 4th Coalition.

A letter signed by Winston Churchill in 1936, addressed to the chief copy editor for his publishers, in which Churchill sends more chapters for Volume III of the four-volume biography of his ancestor, John Churchill, the 1st Duke of Marlborough (1650-1722), should garner $3,000-$4,000. Also, a two-page letter written and signed by Eli Whitney in 1802, eight years after he invented the cotton gin, possibly regarding Savannah cotton contacts, has an estimate of $2,000-$2,400.