Paris – Christie’s’ Books department is pleased to announce the sale of the collection: Paul Destribats, Bibliothèque des avant-gardes in partnership with the experts Jean-Baptiste de Proyart and Claude Oterelo.

This remarkable collection of books and manuscripts was jealously preserved for sixty years – only a few researchers and close friends had access to it. Some books were regularly lent to institutions. The Bibliothèque des avant-gardes comprises 6,000 books, leaflets and manifestos and ephemera from the 20th century. The first three sales, constituting the part 1, include more than 600 lots dating from the 1910s to 1945. They will take place on the 3, 4 and 5 July at Christie’s Paris. The entire collection will be sold at Christie’s in three sessions, spread over a year, from July 2019 to July 2020. 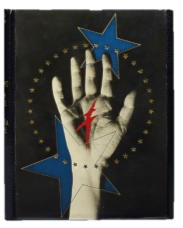 Jean-Baptiste de Proyart, expert of the sale: “Paul Destribats created his collection as an avant-garde’s anthology. It offers multiple collections which would be impossible to reconstitute nowadays.

This monumental dispersion over a year in a series of catalogues is, for the world of books and culture, a sensational event, comparable to some of the greatest 19th century’s books sales.”

Paul Destribats attended high school in Vendôme (Loir-et-Cher) and left for Paris on his bicycle in 1944. In Vendôme in 1943, he discovered Surrealism in a religious school through Georges Hugnet’s La Petite Anthologie du Surréalisme. He also discovered Lautréamont, Rimbaud and especially André Breton, whose texts never left him. In 1947, he briefly got involved in a political party which he left shortly afterwards. He preferred to go abroad and to become a precious stone broker: South America, United States, Europe…the great life.

This Bibliothèque des avant-gardes brings together all the mediums that books and manuscripts were made of: artists’ books remarkably bounded, surrealist books with frontispieces adorned with radical new images, manifestos and purely poetic and literary books, a superb group of leaflets, ephemeras etc. The bindings of these books are most often designed and signed by the greatest French bookbinders of the 20th century: first Georges Leroux, represented through 600 bindings throughout the collection, then Paul Bonet, Pierre-Lucien Martin or Jean de Gonet. In 2005, the Bibliothèque Kandinsky, the institutional library of the Centre Pompidou, acquired a unique collection of reviews and newspapers (1019 periodicals) from the Bibliothèque des avant-gardes. This group was classified National Treasure, and was offered to the French state thanks to the generosity of the Lagardère Group.

A rare fact deserves to be emphasized at the dawn of this remarkable collection’s dispersion. Many of the copies of Paul Destribats collection were loaned to the Centre Pompidou for two major exhibitions: the Spring 2002 exhibition, entitled La Révolution surréaliste and organised by Werner Spies which presented 90 books and manuscripts and the exhibition Dada, in 2005, curated by Laurent Le Bon, still displayed in the museum which include 230 items.

Claude Oterelo, expert of the sale: “Paul was fascinated with Breton’s bravery, intransigence, convictions, a kind of another himself he did not try to imitate but whose poetic universe soften the harsh moments of life. I often told Paul – without any sycophancy – that he was on the top of the books collecting world, but he genuinely did not think so. He just wanted to follow his own way or, as André Breton said, to adjust his walk on the storms’ path”.

Paul Destribats was also particularly fond of Blaise Cendrars and acquired several of his iconic works such as a fascinating copy of La fin du monde filmée par l’ ange de N.D, published in 1919 and illustrated by Fernand Léger. It is one of the 25 deluxe copies which is enriched with the proofs of the book comprising the original stencils, realised according to Léger’s drawings. The whole is put together by an impressive embossed binding made by George Leroux (estimate: €40,000-60,000). The collection also includes the most radical text by the poet, J’ai tué, the only complete autograph manuscript known. The binding was executed by Georges Leroux and the manuscript is estimate at €60,000-80,000.