“Under The Sea with Eric Carle” Opens September 7 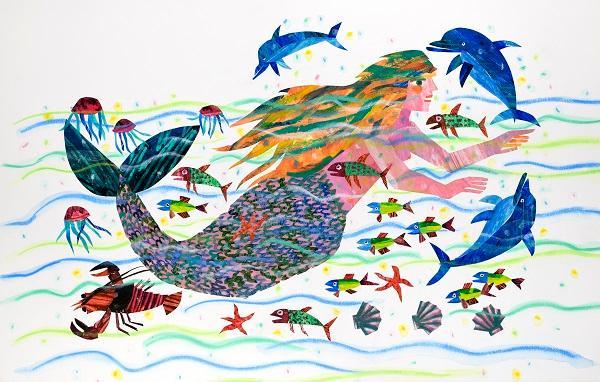 Collection of Eric and Barbara Carle

Amherst, MA — Dive in for an underwater adventure with a new exhibition at The Eric Carle Museum of Picture Book Art. Under the Sea with Eric Carle showcases the artist's vibrant images of penguins, jellyfish, dolphins, seals, turtles, and whales from 11 picture books. The dynamic array of sea life is complemented by Carle's colorful collages of mythological sea creatures-mermaids, leviathans, and the legendary kraken. Under the Sea with Eric Carle opens September 7, 2019 and is on view until March 1, 2020.

Carle combines research and imaginative storytelling to explore the aquatic world in his picture books. The real-life behaviors of hermit crabs and seahorses serve as jumping off points for his anthropomorphic tales A House for Hermit Crab (1987) and Mr. Seahorse (2004). Other books demonstrate Carle's interest in conservation. Panda Bear, Panda Bear, What do You See? (2003), written by Bill Martin, Jr., introduces children to endangered species. Carle's two artworks from the book depict a green turtle and a sea lion. Also on view is one of 12 large counting posters Carle created in the early 1970s of threatened wildlife-the manatee, in this instance. The posters were originally sold at school books fairs.

The exhibition features several examples of Carle's early picture-book art. Hand-painted tissue paper collages from the 1973 book Do Bears Have a Mother Too? show an Emperor penguin with its chick and a seal with its pup. "The large scale of these images is really wonderful," says Ellen Keiter, chief curator. While the majority of art is executed in Carle's signature collage technique, the exhibition also includes his carved linoleum printing blocks from The Boastful Fisherman (1970) and two pen-and-ink drawings from Otter Nonsense (1982).

Museum visitors to Under the Sea with Eric Carle can engage in creative play in a custom-designed "reading boat" and a "submerged" puppet theater stage. Two "shell phones" play recorded ocean jokes and underwater sounds of dolphins, whales, and other sea creatures. As always, the gallery offers numerous Eric Carle books for guests to enjoy.

This exhibition is made possible through the generous support of the Hsin-Yi Foundation.