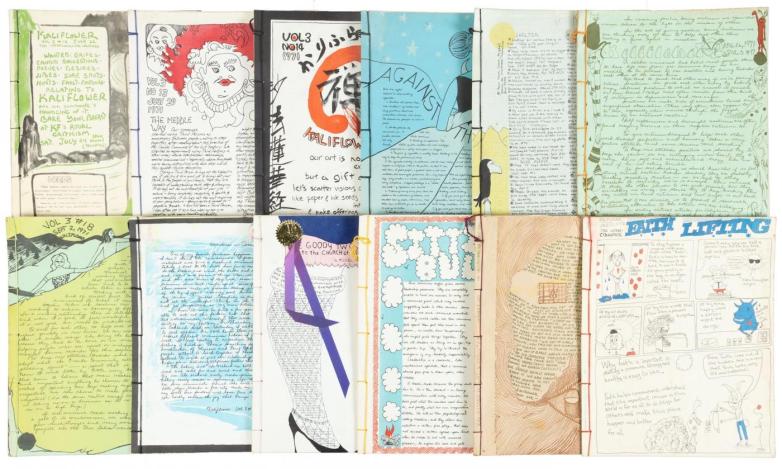 On offer: 37 issues of Kaliflower, the important counterculture publication, with copies in any condition rarely seen on the market. Estimate: $4,000-6,000

Berkeley, CA – PBA Galleries announces an auction of Fine Literature – With the Beasts, Bukowski & the Counterculture on May 19th, 2022. The sale comprises over 480 lots of fine literature and ephemera, featuring scarce works from the counterculture and the Beat Generation, as well as a large selection from Charles Bukowski, including signed typescript poems.

The sale also includes important works by Stephen King, Ernest Hemingway, John Steinbeck, and numerous other major figures of the 20th century. High points of 19th century literature are represented by important editions from Thoreau, Wordsworth, and Whitman among a number of others. The sale also features a wide selection of fantasy and science fiction, with works by Frank Herbert, J.R.R. Tolkien, and Edgar Rice Burroughs. Particularly scarce are two volumes from the Anne of Green Gables series in early dust jackets, one with a rare inscription by L.M. Montgomery.

Major lots of the sale include Elaine Steinbeck's copy of East of Eden with three-page autograph letter signed by Elaine Steinbeck attesting this to be the first copy from the publisher (Estimate: $15,000-25,000). Also present is Anne of Green Gables inscribed with early pictorial dust jacket; the eleventh impression inscribed by L.M. Montgomery on the front free endpaper as well (Estimate: $10,000-15,000).

Among several works by Stephen King, you will find a great copy of the very scarce limited edition of the first volume of King’s Dark Tower series: The Gunslinger. This one of 500 copies is signed by Stephen King and Michael Whelan on the limitation page (Estimate: $7,000-10,000). Also offered are nice copies of The Shining, Carrie, and The Stand.

The poetry section of the sale comprises Complete Poems & Prose of Walt Whitman, 1855-1888. An authenticated and personal book, handled by Whitman and signed by himself on the title-page of Leaves of Grass. Furthermore, it is inscribed by his literary executor, Horace Traubell (Estimate: $5,000-8,000). There is also an increasingly scarce limited signed edition of Eliot’s first book for Faber and Gwyer, a volume gathering his poems from 1909 to 1925. It is one of 85 copies, signed by T.S. Eliot at the limitation (Estimate: $4,000-6,000).

Other sale highlights include: Don Quixote, sixth edition in English of the classic work, "Adorn'd with new sculptures," 1733 (Estimate: $5,000-$8,000) and a set of 37 issues of Kaliflower, a nice run of this important counterculture publication, with copies in any condition rarely seen on the market (Estimate: $4,000-$6,000).

PBA limits live auction participation to online or phone bidding. For more information about upcoming sales, to schedule a preview or phone bidding for a future auction, please contact the galleries at 415.989.2665 or pba@pbagalleries.com.