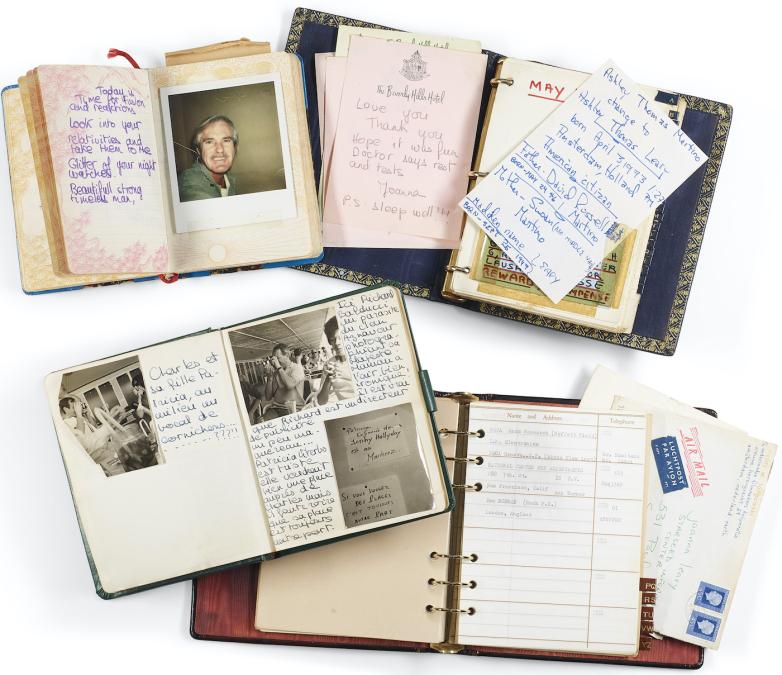 A large archive related to Timothy Leary, from the Estate of Joanna Harcourt-Smith. Estimate: $40,000-60,000

New York – The Bonhams Fine Books and Manuscripts sale on June 28 in New York will feature three standout collections: a large archive of materials related to Timothy Leary, an American psychologist and advocate for psychedelic drugs, an assemblage of important letters and documents from key moments in American History signed by the likes of Jesse James, Abraham Lincoln, George Washington and Davy Crockett, as well as Modern literature from the library of comedy screenwriter David Lloyd.

A Collection of Historical Letters and Documents

A single-owner collection of significant letters and documents from throughout American history includes The Most Important Jesse James Letter Extant, estimated at $300,000 – 500,000. Infamous outlaw Jesse James (1847-1882) was significantly impacted by a raid on his family’s farm in Kearney, Missouri by Pinkerton detectives that left his mom maimed and his half-brother Archie dead. This letter was James’ attempt to provide missing and pertinent information that he hoped would lead to lawful vengeance on the men who were behind the raid. With only 3 known in private hands, letters from Jesse James are extremely rare.

The Literature Collection of David Lloyd

We are also proud to offer fine first editions by some of the biggest names in the literary canon from the collection of screenwriter and producer David Lloyd (1934-2009), prolific comedy writer for classic sitcoms such as The Mary Tyler Moore Show, Taxi, Cheers, and Frasier. Leading the group is a first edition of Tarzan of the Apes by Edgar Rice Burroughs (1875-1950) with the original unrestored pictorial dust jacket by Fred J. Arting, estimated at $40,000 – 60,000. Additionally, F. Scott Fitzgerald’s (1896-1940) final novel and self-professed favorite, Tender is the Night, inscribed and signed by Fitzgerald, and his first novel, This Side of Paradise, are each estimated at $30,000 – 50,000. A first edition of The Maltese Falcon by Dashiell Hammett (1894-1961), a 1930 noir novel originally serialized in the magazine Black Mask, is estimated at $30,000 - $50,000.

A large archive related to Timothy Leary, from the Estate of Joanna Harcourt-Smith

The sale features a large collection of manuscripts, audio tapes, correspondence, printed matter, and photographs of and relating to Timothy Leary (1920-1996) and Joanna Harcourt-Smith (1946-2020) that were key in the writing of the latter’s memoir, and the production of the Showtime documentary it spawned, My Psychedelic Love Story (2020) by Errol Morris. Timothy Leary was a psychologist and advocate on the therapeutic benefits of LSD and other psychedelic drugs.

As a popular counter-culture figure during Richard Nixon’s presidency and claimed by the President to be “the most dangerous man in America”, Leary was arrested multiple times and at one point escaped from prison, fleeing to Switzerland. Leary met Joanna Harcourt-Smith at this time, and the psychedelic love story began. The couple was captured in Afghanistan, resulting in Leary’s return to the US where he faced the maximum prison sentence. From the outside, Harcourt-Smith wrote love letters to Leary, advocated for his release, and published his views to ensure his brain wouldn’t be imprisoned. The extensive archive is estimated at $40,000 – 60,000.

The archive includes:
•    Several manuscripts including the original typescript of Leary's seminal essay Neurologic which describes his seven-circuit model of consciousness and contains expansive sections not found in published editions.
•    4 reel-to-reel audio tapes, each with digital transfers to CD, of Leary’s conversations with criminal psychologist Dr. Wesley Hiler while he was incarcerated in Vacaville, CA from February - April in 1974.
•    Approximately 120 portraits of Leary and Harcourt-Smith, public photos after release from prison, some of family and friends, in black-and-white and color.

In tandem with the live sale, the fourth part of the Medical and Scientific Library of W. Bruce Fye will run online from June 20 - 29. A well-known medical historian, prolific author, and retired cardiologist, W. Bruce Fye assembled a vast collection of medical and scientific books over the past half century which will be offered in the sale.