New York — Swann Galleries closed out February with an exceptional sale of Fine Books & Autographs, which saw a 90% sell-through rate and exceeded the total high estimate, bringing in $522,632. The auction brought forth historic autographs from political figures and celebrities alike, as well as first editions from the nineteenth and twentieth centuries.

The house set an auction record for an autograph by Frederick Douglass with the sale of an 1851 autograph letter signed for $112,500. The historic letter comes from an important turning point in Douglass’s career, the letter—addressed to Sallie Holley, recruiting her for the Frederick Douglass Paper—was written after his split with Garrisonian abolitionism, and the merging of his North Star paper and the Liberty Party Paper. The result surpassed the previous auction record for a letter by Douglass, set by Swann in 2017 when an ALS addressed to journalist George Alfred Townsend sold for $100,000. 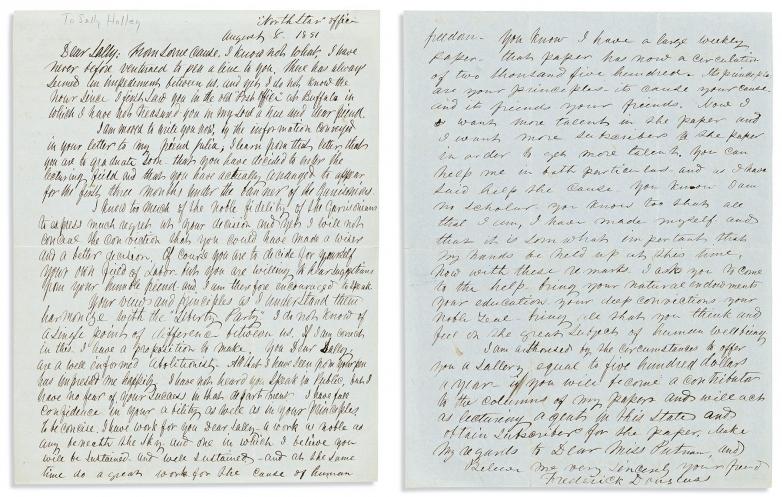 Religious figures, pioneers in medicine, and Hollywood icons also found success with collectors. Notable leaders of faith included an 1843 affidavit signed by Joseph Smith certifying an obligation to appear in court or pay a fine ($11,250); and a 1940 letter in English signed by Mohandas K. Gandhi explaining his delayed response and remarking on his work for the Red Cross ($8,750). An 1866 autograph letter signed by Joseph Lister to his father remarking on a recent success treating a compound fracture ($10,000); as well as an 1861 ALS by Florence Nightingale praising the superintendent of nurses at St. John’s House ($6,000) were standouts in medicine. From Hollywood came, signed and inscribed photograph of James Dean ($8,750), and a watercolor and graphite drawing of Donald Duck signed and inscribed by Walt Disney ($5,000).

The literature offering was led by a first edition, first issue of The Sun Also Rises, New York, 1926, by Ernest Hemingway in the original first-issue dust jacket, at $32,500. Additional twentieth-century highlights included the rarest of the James Bond titles The Man With the Golden Gun, London, 1965, a first edition, first sate with the golden gun on the front cover, by Ian Fleming ($6,500); and a first collected edition of James Joyce’s Collected Poems, New York, 1936 ($7,500). From the nineteenth-century was Mark Twain with the author’s copy of Rubáiyát of Omar Khayyám, the Astronomer-Poet of Persia, Boston, 1878, signed and inscribed twice ($6,750), and Adventures of Huckleberry Finn, New York, 1885, the first American edition in the scarce blue cloth ($5,250).

Highlights from the selection of art books included Salvador Dalí with a signed copy of Alice’s Adventures in Wonderland, Paris and New York, 1969, by Lewis Carrol with an etched, colored frontispiece and 12 color heliogravures ($8,450); and a Limited Editions Club edition of Pablo Picasso and Aristophanes Lysistrata: A New Version by Gilbert Selders, New York, 1934, signed by Picasso ($5,000).