Sotheby's to Auction Critical Precursor to the Bill of Rights 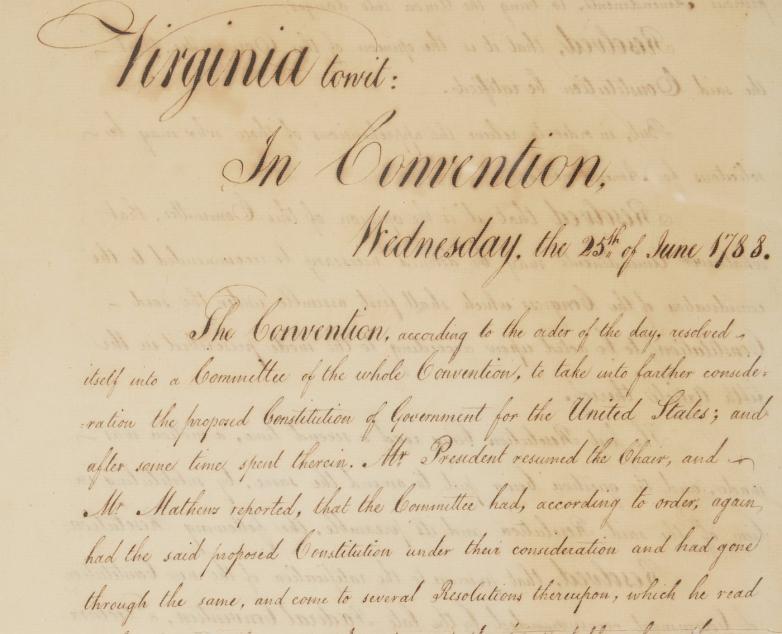 New York — To commemorate the anniversary of America’s Independence on July 4, 1776, Sotheby’s announces a copy of Virginia’s Official Ratification of the United States Constitution as a highlight of Sotheby’s Fine Books and Manuscripts Including Americana auction on 21 July in New York. Within its proposed amendments, this official record of Virginia’s ratification contains the nucleus of the what would become the United States Bill of Rights – one of the three founding documents of the nation, along with the Declaration of Independence and the Constitution. On offer with an estimate of $3/5 million, the document is one of just three surviving copies from the original set of twelve, each intended to be sent to the other state governors or legislatures in order to gain support for a national Bill of Rights. The present copy is one of only two in private hands, and comes to auction for the very first time after being rediscovered 30 years ago.

The official engrossed and attested copy of Virginia’s official ratification of the United States Constitution signed by the President and Secretary of the Convention, together with two sets of amendments to the Constitution proposed by the Virginia Convention and selected highlights will be on public view at Sotheby’s York Avenue galleries from 12 – 20 July, ahead of the live auction on 21 July in New York.

The auction follows Sotheby’s historic sale of the first printing of the United States Constitution, which achieved $43.2 million in November 2021 and marked the most valuable historical document ever sold at auction, as well as the highest price ever achieved at auction for any book, manuscript or printed text.

The present document has remained in the collection of renowned manuscript collector David Karpeles for more than 30 years and will be sold to benefit the Karpeles Manuscript Library Museums, comprising the largest private collection of important original manuscript documents in the world.

History of the Document

In June 1788, The Virginia Ratification Convention was called to meet in Richmond, Virginia. The 170 delegates present included the flower of the founding fathers from the Old Dominion: James Madison, Patrick Henry, George Mason, George Wythe, Edmund Randolph, James Monroe, Benjamin Harrison, John Marshall, and John Blair among them. On the first day of the Convention, Edmund Pendleton was unanimously elected president, and John Beckley was appointed secretary. The present document is signed by both Pendleton and Beckley.

While the Convention approved the Constitution unconditionally, it also submitted to Congress and to the other states a lengthy series of proposed amendments, whose ideas and concepts are echoed unmistakably throughout the Bill of Rights. Of the first ten amendments to the Constitution I, II, III, IV, V, and VIII have their direct antecedents – and often their precise wording – in the present manuscript, while the others animate and confirm the sentiments expressed by the Virginia Convention.

Virginia was not the only state to ratify the Constitution with the understanding that amendments providing for a Bill of Rights would be adopted almost immediately – the various ratifying conventions put forth a substantial number of proposals, ranging from South Carolina's four to New York's fifty-seven. But it is Virginia’s proposed “Declaration or Bill of Rights” that is most closely reflected in the federal Bill of Rights enshrined in the first ten amendments to the Constitution.