Significant Selection of Americana at Sotheby’s Through July 21 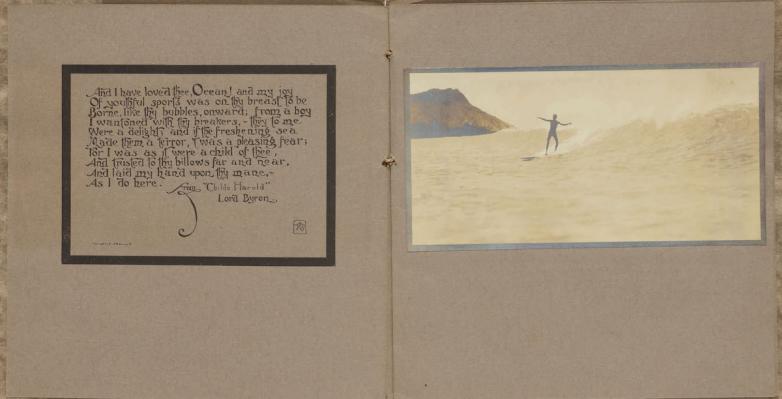 A handmade edition of The Surf Riders of Hawaii, a self-published volume circa 1914 that is the first book dedicated to surfing. Estimate: $30,000-50,000

New York – Sotheby's is pleased to share that the summer Fine Books & Manuscripts Online Auction, Featuring Property from the Eric C. Caren Collection is now open for bidding through 21 July.

The auction is distinguished by a compelling selection of books, letters, archives, newspapers, broadsides, and other printed and manuscript artifacts, including many from the Eric C. Caren Collection, illustrating “How History Unfolds on Paper.”

The auction features an exceptional selection of historical documents chronicling African American history, from the 18th century to 20th century. The group is led by a 1794 signed indenture granting land for the use and benefit of the African Free School ($250,000 – 350,000), a landmark document of social equality that created a first-of-its-kind institution in America (full announcement attached from February for further background).

The sale also includes remarkable and unusual documentation of African American soldiers fighting in the Revolutionary War, including five manuscript fragments with signatures from some of the very first African American to enlist for the American Revolution following Lexington & Concord in 1775 ($10,000 - $15,000). There is also an especially notable document signed by Benjamin Harrison, a Signer of the Declaration of Independence (and great-grandfather of the president of the same name) that certifies Daniel Cumbo, a black veteran of the Continental Army, is eligible for a grant of land for his service ($10,000 - $15,000).

There are also a number of remarkable anti-slavery and abolitionist items, including an 1848 handbill promoting an Ohio abolition newspaper whose motto was “No Union with Slaveholders” ($1,500 - $2,500); Frederick Douglass’s stirring speech against the Fugitive Slave Law printed in his own newspaper ($2,500 - $3,500); and broadside announcing the formation of committee in Massachusetts to resist the admission of Texas (then an independent nation) into the United States as a slave state ($2,000 - $3,000).

Additional Highlights From the Sale

Among the important property includes in the sale is an autograph manuscript of a Sherlock Holmes story, “The Adventure of the Greek Interpreter,” by Sir Arthur Conan Doyle ($350,000 – 450,000), a tour-de-force of deductive observation that is a prime example of Doyle's genius, and underscores the originality of his characters; a letter signed by Adams, Franklin, and Jefferson establishing diplomatic relations with Sicily ($900,000 – 1,200,000), which helped lay the foundation for diplomatic service of the new nation; a handmade edition of The Surf Riders of Hawaii ($30,000 - $50,000), a lovingly self-published volume circa 1914 that is the first book dedicated to surfing, with many early photographs capturing surfers in action; and many other important items related to Americana, American and English Literature, and cultural history.