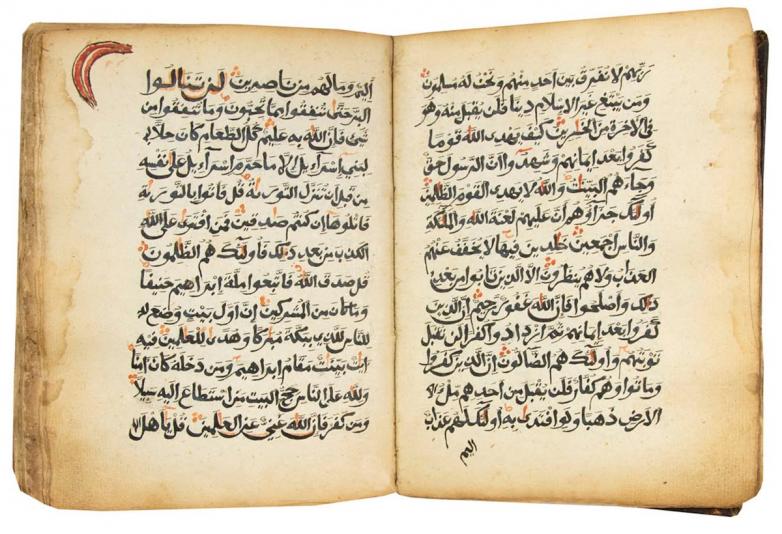 A Harari Quran section containing the first part of the Quran, from al-Fatihah to al-Kahf. Harar, Ethiopia late 18th century.

London — Shapero Rare Books, internationally renowned dealers in antiquarian and rare books, has launched a new Near East and Islamic department. Shapero specialists have over 250 shared years of experience in the book world, with particular expertise in fine illustrated books from the 15th to the 20th century, Judaica, travel and voyages, natural history and more. Under the specialist eye of Roxana Kashani, the new Islamic department will feature fine and rare works spanning the broad and varied expanse of this collecting area, from the Arabic, Ottoman, Persian and Indian worlds.

Kashani has worked in rare books and manuscripts for over a decade and now brings her expertise in Middle Eastern and Indian printed books, manuscripts and miniatures to Shapero. The books sourced by the department will include works from the Ottoman Empire, Ethiopia and India, such as a rare manuscript copy of the first half of the Quran, copied in Harar, eastern Ethiopia. This remarkable manuscript demonstrates the impact of trade routes between India and East Africa with its unusual script- a distinctive mix of the informal naskh script of eastern Africa and the Bihari script from India. Despite Harar and eastern Ethiopia becoming a centre of Islam by the mid-eighteenth century, manuscripts from the area are exceptionally scarce, with very few examples surviving in collections worldwide.

A fine eighteenth-century Ottoman manuscript of the popular Sunni Muslim devotional prayerbook, the Dala’il al-Khayrat, by Moroccan scholar al-Jazuli, contains a devotional du’a for Prophet Muhammad and iconic double-page illustrations of the holy sites of Mecca and Medina. Al-Jazuli, one of the seven Muslim saints of Marrakesh, compiled the Dala’il al-Khayrat, his best-known work, after spending almost forty years travelling to Mecca, Medina and Jerusalem.

From India comes a rare History of the Nawabs of Oudh, lithographed in Hindustani with an alternative title and plate captions in Urdu. This 1876 Lucknow publication was acquired by a Victorian traveller and comes with contemporary pencil captions and a two-page description of the text in their hand. The portraits included are of 10 Nawabs, the leaders of the Oudh region. The portraits all appear chronologically throughout the text, beginning with Saadat Ali Khan’s reign in 1722 and ending with Wajid Ali Shah, whose reign ended in 1856. This incredible and well-travelled first edition is printed in Hindu with Farsi and Urdu additions.

Shapero Rare Books can be found in the heart of Mayfair on New Bond Street and their extensive collection of books and other works can be explored and bought online. They exhibit at major international art fairs including TEFAF, Frieze Masters and Masterpiece, as well as antiquarian and rare book fairs from San Francisco to Paris to Hong Kong.

Near East and Islamic specialist Roxana Kashani says, “After ten years in the auction world I’m delighted to be joining Shapero Rare Books. I’m looking forward to expanding Shapero’s collections of remarkable antiquarian and rare books from the Arabic, Ottoman, Persian and Indian worlds, as well as working within my own particular field of interest, manuscripts from the Near East.”