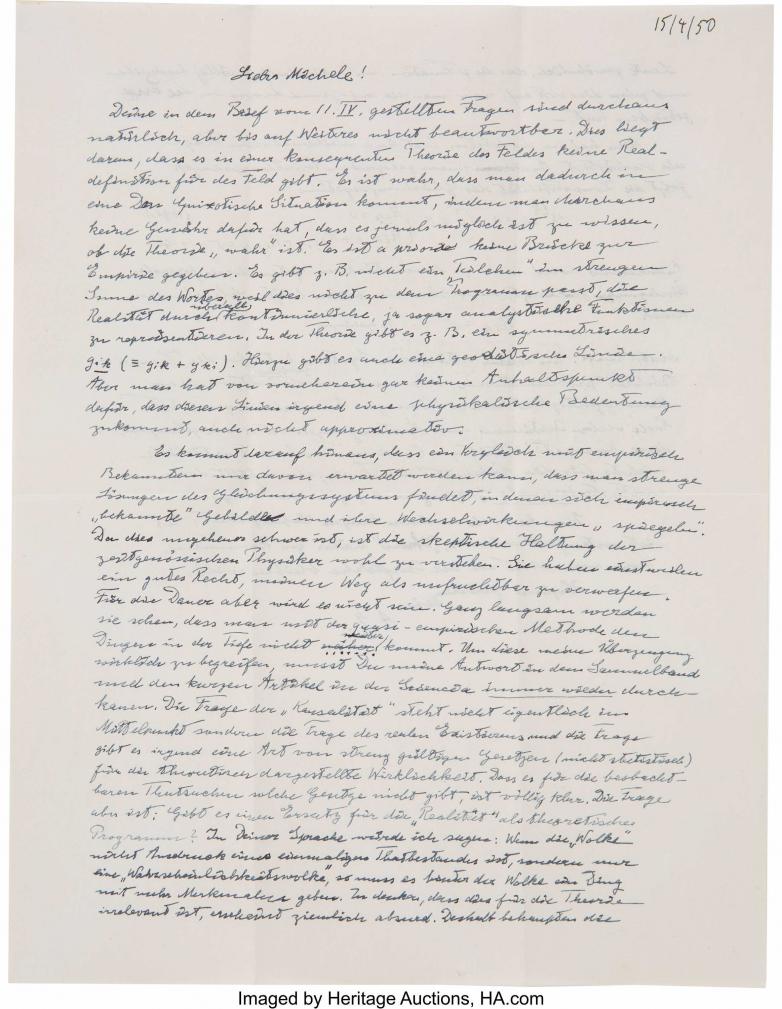 Dallas, TX – A range of important signed letters, including several from Albert Einstein, will be among the top attractions in Heritage Auctions’ Historical Manuscripts Auction April 23 in Dallas, Texas.

“This sale includes numerous signed letters, including several from Albert Einstein, who many view as one of the most important scientists of all time,” Heritage Auctions Historical Manuscripts Director Sandra Palomino said. “To have hand-written notes in which he discussed some of his most significant scientific accomplishments represents an extremely rare opportunity for collectors of historical manuscripts.”

Albert Einstein Autograph Letter Signed “A.E.” (estimate: $70,000+) was sent to Einstein’s friend, Michele Besso, shortly after Einstein’s article “On the Generalized Theory of Gravitation,” appeared in Scientific American. Written in German, the letter includes some of Einstein’s thoughts about a wide range of topics, ranging from religion to his Unified Field Theory, complete with equations written by Einstein himself. At the age of 71, Einstein was seeking to augment his Unified Field Theory, creating an umbrella theory for Special Relativity and Gravity, but experienced frustration over the fact that “contemporary physicists” seemed content with theoretical abstractions without proving the underpinning equations.

In a Feb. 3, 1950 Albert Einstein Autograph Letter Signed “A. Einstein” (estimate: $25,000+) from the renowned theoretical physicist to his assistant, Ernst Strauss, Einstein discusses the confirmation of his Generalized Theory of Gravitation, which broadened the application of his General Theory of Relativity. Complete with handwritten equations, Einstein confirms his appreciation for the “excellent generalization of the gravitational equations” and even includes an indicator of their personal friendship when he signs off by offering “Cordial greetings to both of you and the cat.”

In a three-page Albert Einstein Autograph Letter Signed “Albert” to Michele Besso (estimate: $25,000+) from Besso’s published letters, the author predicts his “hypothetical Nobel Prize” in 1918 – four years before he actually won the award for his Special Theory of Relativity. He also hails the intelligence of fellow physicist Hermann Weyl but discounts Weyl’s understanding of electricity, acknowledges that he (Einstein) “would not have the patience” to write a book on statistical mechanics and even discusses the difficulty of communicating under the censorship that was prevalent during World War I.

John F. Kennedy Uncensored Campaign Notes Made While Suffering from Laryngitis (estimate: $40,000+) is an extraordinary trove of 78 separate pages on which the 35th American president personally wrote by hand on a number of topics, including his philosophies, campaign plans and his frustration with asking and answering questions with his staff. He acknowledges that he “got into the blonde[s]} and reveals his concern about his marital infidelity becoming public knowledge. He refers to specific events, such as his Sept. 12, 1960 speech to the Greater Houston Ministerial Association at the Rice Hotel, a performance that was important to his campaign and is widely considered one of his best speeches. He also alludes to specific people and reveals thoughts about the campaign, such as in his suggestion that it might be better not publicly debate Minnesota Senator Hubert Humphrey, because of the impact laryngitis had had on his voice, and the fact that Humphrey is “pretty good with a crowd.”

In a short letter to Major General Benjamin Lincoln, the first American president encouraged the inclusion of and support for the combat engineers who were the forerunners to what now is the Corps of Engineers. George Washington Autograph Letter Signed “Go: Washington” (estimate: $25,000+) reads, in its entirety, “Let the Corps of Sappers & Miners be part of the hoop, which compose the first Embarkation of our Army. I am sincerely & affectionately yrs.” Lincoln played a significant role at Yorktown and accepted the surrender of British General Charles Cornwallis’ sword from British General O’Hara on Oct. 19, 1781.

END_OF_DOCUMENT_TOKEN_TO_BE_REPLACED

Building Your Great Collection, One Fine Book at a Time.