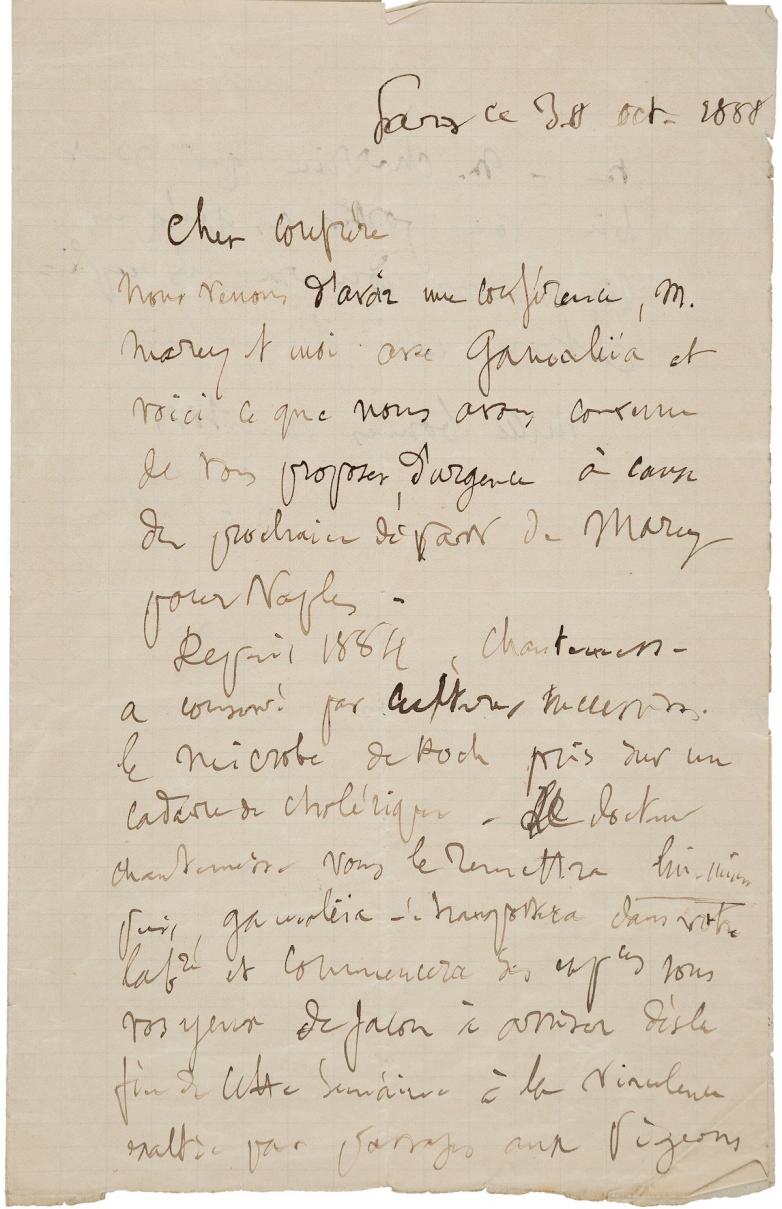 Dallas, TX – A note written in 1636 by the man who solved the riddle of human circulation and reproduction while serving as personal physician to King Charles I. A missive from 1880 by “the father of microbiology” to a colleague about cholera and “the hot virulence caused by the flight of pigeons.” A letter from the doctor who pioneered modern abdominal surgery. And a dispatch from the professor who, in 1839, gave tuberculosis its name.

Heritage Auctions’ Manuscripts event, to be held online Nov. 12, is rife with circular letters, correspondence, documents and ephemera signed by men and women about whom libraries’ worth of histories have been written. They range from Mary Queen of Scots to George Washington, Abraham Lincoln to Bugsy Siegel, Steve Jobs to Nelson Mandela. Princes and princesses, presidents and Supreme Court justices, generals and foot soldiers, authors and artists, inventors and dictators – their private missives and public pronouncements available in this sale often helped shape the modern world and our understanding of it.

There are more than 600 lots in this event inscribed by earth-shakers and the music-makers – among them, extraordinarily offerings from composers Ludwig van Beethoven and Franz Schubert, whose writings seldom come to market. In his missive, Beethoven requests the return of his “piano trio in B-flat,” and offers that it “will be returned within a few days together with the violin sonata in G.” Schubert’s letter, to a friend, declines a lunch invitation.

But at a moment when headlines abound about science under siege, this sale, too, reminds us that what is has always been.

Offered here, from a single collection assembled by a collector in South Florida, are the writings of physicians, professors, surgeons and naturalists whose work was misunderstood or misinterpreted in its day but ultimately hailed as groundbreaking, live-saving, world-altering.

The Oct. 2, 1636, letter from William Harvey, in Latin, was written during his service as Charles I’s physician, and comes only eight years after he published Exercitatio Anatomica de Motu Cordis et Sanguinis in Animalibus (An Anatomical Study of the Motion of the Heart and of the Blood in Animals), in which he “explained how the heart propelled the blood in a circular course through the body,” according to the BBC. Harvey’s discovery was hailed in England, the news outlet wrote, “although it was greeted with some skepticism on the Continent.”

Louis Pasteur’s letter of Oct. 30, 1888, concerns cholera – for which he created the first vaccine while battling the so-called germ theory denialists who wrongly insisted that bacteria were the result of disease and not the cause of it. Pasteur’s missive makes mention, too, of André Chantemesse, noted for his work in ending typhoid fever. And there is reference to Etienne-Jules Marey, a pioneer in the field of cardiology (and cinematography!).

There is also a Pasteur-penned postcard addressed to an unknown recipient on May 18, 1886. In this brief, moving communiqué Pasteur pleads for a young Russian boy who had been bitten by a rabid dog; he offers to pay for the boy’s medical expenses, as his parents were too poor to pay for his care.

Also found in this sale is a cache of letters from a trio of medical innovators: from Johann Lukas Schönlein, who gave tuberculosis its moniker (previously, it was known solely as consumption); Theodor Billroth, the Austrian surgeon regarded as the father of modern abdominal surgery; and Morell Mackenzie, the British physician who pioneered laryngology in the United Kingdom.

“All of these men were pioneers,” says Palomino. “They weren’t necessarily trusted in their time. But, of course, all became revered in their fields.”