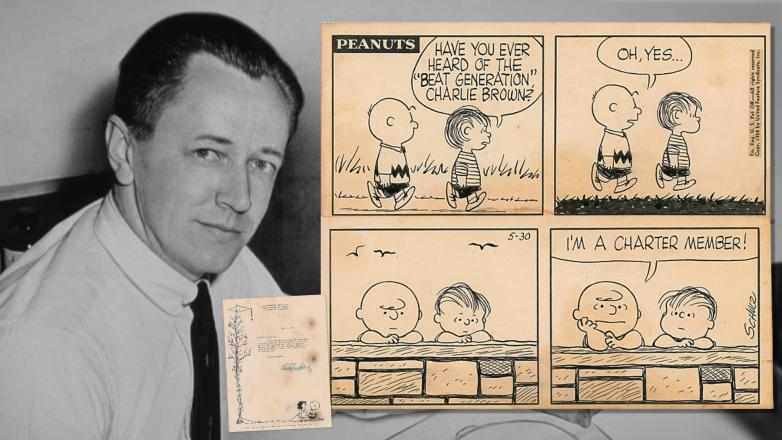 An original hand-inked four-panel Peanuts daily comic strip drawn by Charles Schulz for May 30, 1958, signed vertically in the last panel with his artist signature, "Schulz."

Headlining the sale is an original hand-inked four-panel Peanuts daily comic strip drawn by Charles Schulz for May 30, 1958, signed vertically in the last panel with his artist signature, "Schulz."

The comic follows a conversation between Linus and Charlie Brown: Linus asks, "Have you ever heard of the 'Beat Generation,' Charlie Brown?" Looking forlorn, Charlie replies: "Oh yes… I'm a charter member!" Affixed at center is a 1958 United Feature Syndicate copyright notice.

Includes a one-page typed letter about this strip, signed "Charles M. Schulz," personal Peanuts letterhead, June 12, 1958, in full: "I was very pleased to hear that you liked the strip about the 'beat generation.' Now, I do not have the originals here, but I am going to forward your letter to the syndicate, and if it is still available, I am certain that you will get it from them soon." Accompanied by the original mailing envelope for the letter.

Among other featured items:

Claude Monet two-page signed letter in French, Giverny par Vernon letterhead, November 2, 1921. Letter to art critic Gustave Geffroy, an early supporter of the Impressionists. In part (translated): "I very much regret to be obliged to postpone the coming of the photographer, but your letter of the 29th did not reach me until yesterday evening, and you did not think of coming, I would have found myself very embarrassed on the choice of the fabrics to reproduce, and then there is the color reproduction that I do not admit and that absolutely. In short, I need to be fixed by a word from you, and after I can fix you another day." Accompanied by the original mailing envelope, addressed in Monet's hand.

Pierre-Auguste Renoir three-page handwritten letter in French signed "Renoir," 1 Place de l'Eglise-du-Voeu letterhead, January 25, 1914. Letter to art dealer Ambroise Vollard. Writing from Cagnes, Renoir says that he is ready to receive "the sculptor" whom Vollard is sending. He recommends that the sculptor should not miss the "male and female model" that he likes. In part (translated): "If the large statue won't come off, he can handle the clock. He will not be short of work. I am not going to interfere in all that." Accompanied by the original mailing envelope, addressed in Renoir's hand.

Henri de Toulouse-Lautrec letter by the important French painter and printmaker (1864-1901) whose lively, colorful portrayals of the people and places of fin-de-siècle Paris take place among the most iconic images of the era. The signed three-page handwritten in French, signed "H," undated and untranslated.

Georges Braque original artist's palette drawing by the Cubist innovator. Important French painter (1882-1963) who, along with Picasso, was one of the seminal figures in the development of Cubism. Amazing original ink sketch of an artist's palette, brushes, and vase accomplished by Braque on an off-white sheet, wonderfully signed within the drawing, "G. Braque, 1953." Double-matted and framed to an overall size of 14.25 x 17. A rare opportunity to own an original work by a founder of one of the most important artistic movements in history.

Other highlights include a manuscript by Wilbur Wright, a fully signed Led Zeppelin II album, an important letter by Albert Einstein anticipating WWII, a handwritten letter by Malcolm X written from prison, and flown Robbins medallions from the collection of Apollo 17 moonwalker Gene Cernan.