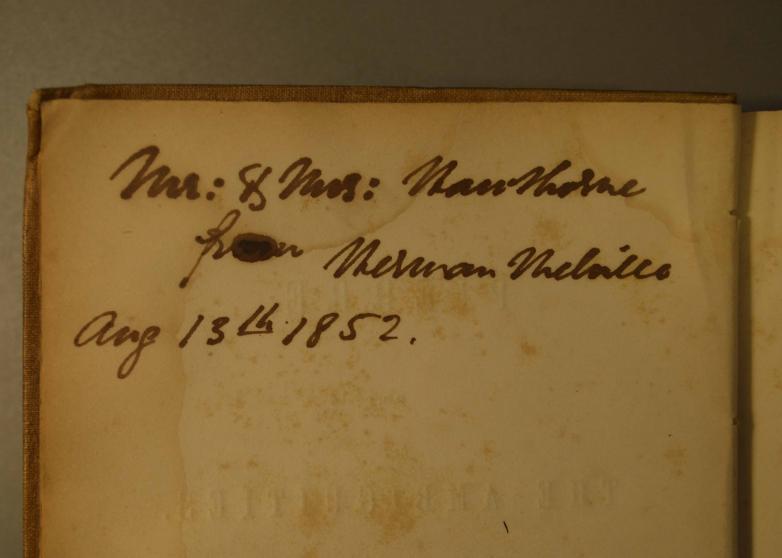 Inscribed copy of Pierre Or, the Ambiguities, presented by Herman Melville to Nathaniel and Sophia Hawthorne, 1852.

Few American writers have achieved the cultural impact of Herman Melville, author of the eternal classic Moby-Dick, yet he died unrecognized by his contemporaries for his genius. This new exhibition will explore the life, work, and legacy of this iconic but under-read author.

Making use of The Rosenbach’s extensive Melville holdings and numerous loans from partner organizations, including rare manuscripts and first editions, the exhibition will examine how Melville fled to the watery fringes of 19th-century life to grasp core truths about American society—and even human nature itself. The exhibition will challenge visitors to consider what Melville’s work has to say about modern America through the lens of marine conservation, globalization, social justice, and LGBTQ+ identity.

“The Rosenbach’s interpretive team wanted to present our extraordinary Herman Melville collections in a fresh way on this important anniversary.” says Judy Guston, Curator and Director of Collections. “The exhibition explores Melville’s life and work in a way that both describes the author’s own outlook and mirrors important contemporary conversations. We hope our visitors will find Melville’s exploration and analysis of the world, his nation, and his internal self, more modern, exciting, and meaningful than ever.”

Highlights of the exhibition include an inscribed copy of Pierre: Or, the Ambiguities, presented by Melville to Nathaniel Hawthorne and his wife in 1852; an inscribed copy of The Whale (original title of Moby-Dick) presented by Melville to his father in-law Lemuel Shaw, Chief Justice of the Massachusetts Supreme Court; a rare copy of Timoleon, a book of poems published just four months before his death; various tools and hunting implements from a historic whaling vessel on loan from the Independence Seaport Museum; and much more.

American Voyager: Herman Melville at 200 will be on view at The Rosenbach October 3, 2019 through April 5, 2020. Major support for American Voyager is provided by The Gladys Krieble Delmas Foundation, The McCausland Foundation, Susan Tane, and Clarence Wolf. Full details about American Voyager can be found at rosenbach.org/americanvoyager.

"I can think of no better way of bringing to life The Rosenbach's growing Melville collection – already one of the finest in the world – than by placing it at the center of an exhibition and related programs that show the ongoing relevance of the issues Melville raised in his work." says Derick Dreher, the John C. Haas Director of The Rosenbach.

Alongside the exhibition, The Rosenbach will present a series of programs, tours, and courses with themes relating to American Voyager. Highlights include a stage performance by actor Stephen Collins, Sailing Towards My Father on October 8; a mini-series entitled Three Looks at Jonah that examines the biblical figure of Jonah through Judaism on October 16, Christianity on December 11, and Islam on January 15; the second annual Moby-Dick Marathon Reading at the Independence Seaport Museum on November 9-10; an in-depth course called Beyond Moby-Dick starting on November 17; and a new Behind the Bookcase: Hands-on Tours focused on the exhibition that will be offered multiple times throughout the season. Full dates and details about all programs at rosenbach.org/events.

Also coming this fall to Parkway Central Library’s West Gallery is a complimentary exhibit, Voyages by Road and Sea: Philadelphia Perspectives on Walt Whitman and Herman Melville. To mark the 200th birthday of two American writers, Voyages by Road and Sea explores the lives and legacies of Walt Whitman and Herman Melville, as well as creations of Philadelphia-area artists who find inspiration in their works.