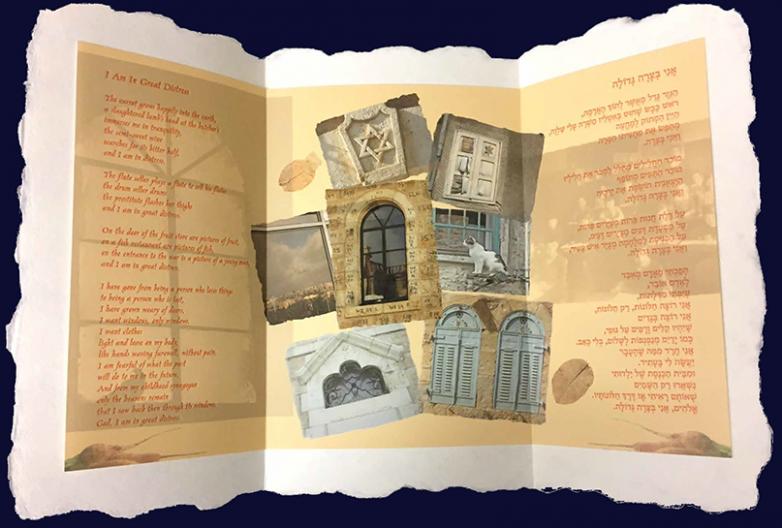 “The award panel was very impressed with all of Black’s artwork,” said Rita Rosen Poley, director and curator of the Temple Judea Museum in Elkins Park, Pa, who headed the awards panel. “It is always a tough decision as there are so many talented artists who apply but he submitted a very compelling proposal.”

“I was very pleased to hear that I won the award,” said Black, 62, who works out of his studio at home in Arlington, Virginia, and prints at Pyramid Atlantic Art Center in Hyattsville, Maryland. “It is wonderful to have the support and appreciation of the committee.”

Black, a former journalist with The New York Times in Israel, plans on exploring the Biblical story of the binding of Isaac. He will use letterpress printing techniques to play with individual voices, gaps and silences in the text as well as Japanese sumi-e ink painting to convey the stark landscape. He will integrate traditional midrashic interpretations as well as his own questions about the story.

“I want to reflect the sacred geography of the Biblical text,” said Black, “and to capture the ambiguities of the story, many of which are still facing us today, such as that between faith and morality.

The award, which comes with a $1,500 grant, was largely based on Black’s most recent artist book, The Amichai Windows, a bilingual limited edition of Yehuda Amichai poems with multi-layered collages. A number of major institutions, including the the Library of Congress, Yale University and the U.S. Holocaust Memorial Museum, have acquired it so far.

The Isaac Anolic Jewish Book Arts Award is named in honor of Isaac Anolic, a practicing attorney who was dedicated to all aspects of Jewish law and culture. His intense support of his families’ artistic endeavors have led, in turn, to support for those creating art out of the book form. The award is meant to highlight the love of books by the Jewish people, who are often called the “people of the book.”