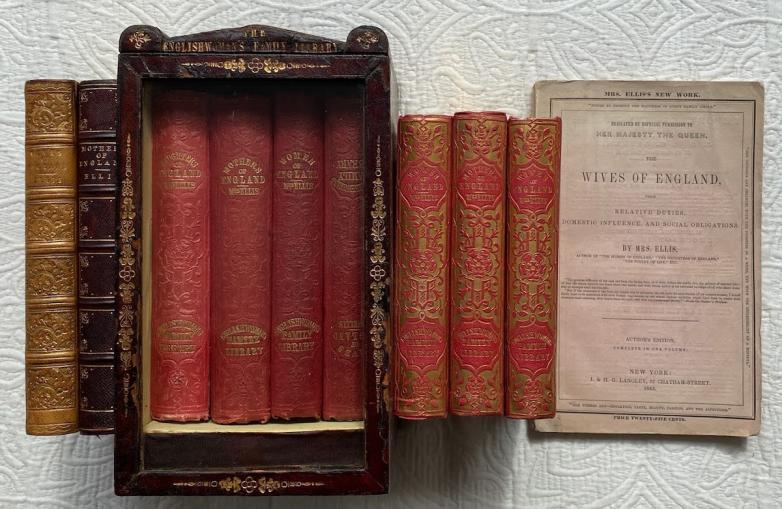 An original publisher’s desktop red morocco bookcase made to contain and display a set of four of Mrs. Ellis’s ‘lifestyle’ works sold at the August 20 sale.

Connecticut — All of the important Churchill lots at the start of the sale sold over estimate. Some of the high spots included lot 9 a typescript newspaper article, first line "Is a European war becoming more probable? " with comments on the "United States of Europe", with original hand-written corrections. [Avignon, France: sent 10th August 1931]. for $6930; lot 10 was a 6-page typed carbon-copy article, starting '“Although at first sight one would notice the important differences of sex, ago, appearance, and culture between Mr. Bernard Shaw and Lady Astor, they have at least one intensely marked quality in common. They like to have everything both ways", [N.p.: probably written in July/August 1931]  for $12821; lot 11 an original carbon-copy typescript of an article, starting "There has rarely been a crisis in which Hope and Peril... ,  with manuscript corrections. [No place: undated but March 1936]. for $6930; lot 13 an original carbon copy article, starting “How fares the United States under the bold schemes of President Roosevelt? This is a question which we ask ourselves from time to time in this island with a curiosity born both of sympathy and interest. Our economic life as a world-wide trading community is profoundly affected by the fortunes of the other great branch of the English-speaking peoples.  Their prosperity is our refreshment. Their joys feed our hopes.” [No place: undated but April 22, 1935 for 4851; and lot 14 contained typescripts of two articles on 1.Hitler and the invasion of the Rhineland (1936) and 2. the Japanese invasion of Manchuria (1931), this sold for $6064.

A selection from the rest of the sale: there were a number of books and artwork of sporting interest, lot 21 a very fine 1st edition of Hutchinson on Golf made $1100, whilst the Frank Benson etching (lot 56) of a leaping salmon made $440. Fine bindings from various eras were represented: lot 38 a well-restored example of the work of Thomas Gosden made $660; lot 93 a fine example of a Scottish 18th-century ‘wheel’ binding sold for $525 – unfortunately this was volume 2 only from a two-volume set; lot 144 was unusual: a very fine French morocco ‘jaune’ binding richly tooled in gilt, but on a red-ruled copy of a Baskerville edition of Catullus (etc.) Opera or works, this sold for $1100; even rarer was an original publisher’s desktop red morocco bookcase made to contain and display a set of four of Mrs. Ellis’s ‘lifestyle’ works – Ellis’s life and work is currently being reassessed and the combination of renewed demand and the rarity of the bookcase pushed this lot to $1733. There was some very nice manuscript material: lot 32 a small archive of letters, the majority form an early settler in Central City, Colorado, made $2200; and, from the anti-Vietnam War era, lot 76 R.A. Parker and J F Mahony’s manuscript re-worked the Declaration of Independence, the 10 foot 4 inch long scroll, was  titled ’In Tarrytown, July 4, 1971 / A Declaration of Peace’  and sold for $880. Classic European literature was present and sold: lot 200 was a true first edition set of V. Hugo’s Les Miserables which made $1042. A very rare Children’s classic, lot 196 Ann Taylor’s best known poem ‘My Mother’, sold for $990, whilst a forgotten slice of early colonial American history, a single issue of Mercuriius Politicus including a report from Boston, Mass., made $550. Last but not least, two lots that it is difficult to categorise: an original concept design from vanden Plas for a pre-war Alvis fastback automobile made $660, and lot 219 sold for $354.20 (a vintage fabric sample book from Peter Macarthur & Co. of Scotland containing 252 samples of tartans).

All in all, a pleasing result during difficult times – the next single-owner sale focusing on Photographs, Albums, Archives including photos and Photobooks will take place in October (see https://antiquarianauctions.com/ for more details.)