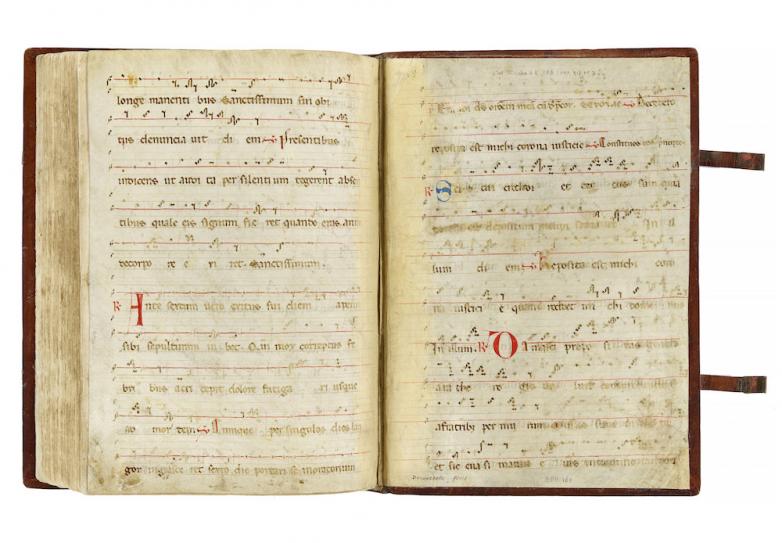 New York — A beautiful and very rare early Renaissance manuscript of two of Plato’s greatest dialogues, Phaedo, known to ancient readers as On the Soul, and Gorgias, translated from the Greek by Leonardo Bruni, leads Bonhams online-only Essential Genius: Ten Important Manuscripts for Modern Times sale which runs from June 1- 10. This is the first Bruni-Plato manuscript of comparable quality to be offered at auction in the past 50 years. It has an estimate of $200,000-300,000.

This compilation of essential works, written circa 1420, which also includes Bruni’s influential Cicero Novus, as well as a series of important Bruni translations of Demosthenes and Aeschines, represents meditations on mortality and morality, and begins with Plato’s arguments for the immortality of the soul from the point-of-view of Socrates’ death-bed.

Book and Manuscript specialist at Bonhams New York, Darren Sutherland said, “Early Renaissance manuscripts of Plato are very rare. His works were essentially lost during the Middle Ages, and their rediscovery at the beginning of the Renaissance sparked a revolution in thought that transformed the arts and sciences and continues unfolding today.”

Unlike Aristotle, Plato positively emphasized the importance of mathematics to philosophy, and his thought was eagerly embraced by Renaissance scientists, laying the foundation for modern understanding of number and science.

Phaedo is one of Plato’s best-known dialogues and sits alongside the philosopher’s Republic and Symposium as the master works of his middle period. Observations in the work include:
•    “There is no greater evil one can suffer than to hate reasonable discourse.”
•    “The very good and the very wicked are both quite rare.. most men are between those extremes.”
•    “With [wisdom] we have real courage and moderation and justice and, in a word, true virtue...”

The sale Essential Genius: Ten Important Manuscripts for Modern Times offers a curated collection of 10 world-class manuscripts celebrating the thinkers and ideas that have transformed the world. Spanning 600 years of history, these manuscripts highlight critical moments in the evolution of western culture. Individually and collectively, they speak to the sensibility and needs of the modern age.