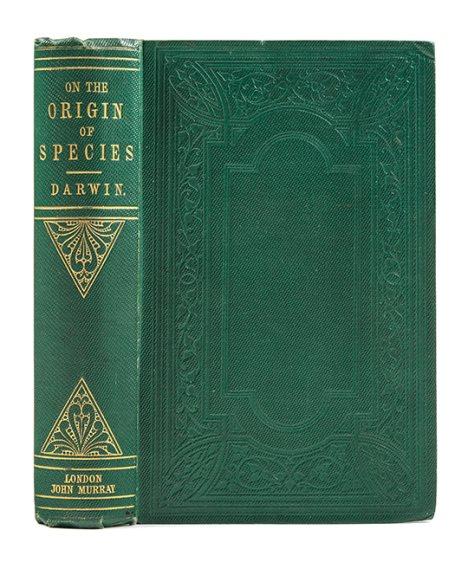 Head of Hindman Book Department, Gretchen Hause, comments: “This highly curated, 85-lot sale offers the rare opportunity to own a number of the most influential books in the development of western thought and civilization. It is a unique opportunity for all bibliophiles or anyone who values rare objects of great cultural significance.”

The collection consists of landmark titles, many with notable provenance, in the fields of science, technology, math and statistics, literature, Americana, and the social sciences, including:

CHARLES DARWIN. On the Origin of Species. London: John Murray, 1859. First edition.
Est. $120,000–180,000.
The superb Garden Copy, also previously owned by American philanthropist Paul Mellon (1907–1999), the most significant scientific work of the nineteenth century in which Darwin “revolutionized our methods of thinking and our outlook on the natural order of things.” (Printing and the Mind of Man).

SIR ISAAC NEWTON. Philosophiae Naturalis Principia Mathematica. London: Joseph Streater for the Royal Society, to be sold by Samuel Smith and other booksellers, 1687. First edition.
Est. $150,000–250,000
This edition of Newton’s pivotal book was described by Albert Einstein as “The greatest intellectual stride that it has ever been granted to any man to make,” and in Printing and the Mind of Man as “The greatest work in the history of science.”

ADAM SMITH. An Inquiry into the Nature and Causes of the Wealth of Nations. First edition. London: for W. Strahan and T. Cadell, 1776. 2 volumes. Provenance: Jn. Evans (signature on title-page).
Est. $70,000–90,000
Smith’s landmark opus is considered the first classic of modern economic thought, and the first major exposition of free trade.

[FEDERALIST]. ALEXANDER HAMILTON. — MADISON, James. — JAY, John. The Federalist: A Collection of Essays Written in Favour of the New Constitution. First edition. New York: J. and A. M'Lean, 1788. 2 volumes.
Est. $60,000–80,000
A collection of all 85 essays written by Hamilton, Madison, and Jay in defense of the new Constitution, first published anonymously and serially in New York newspapers. Described in Printing and the Mind of Man as “One of the new nation’s most important contributions to the theory of government.”

J. K ROWLING. Harry Potter and the Philosopher's Stone. First edition. London: Bloomsbury, 1997. Original publisher's pictorial boards. Signed by the author (6/9/97).
Est. $80,000–120,000
A superlative copy of the first edition of Rowling’s first work, signed by the author in the year of publication.