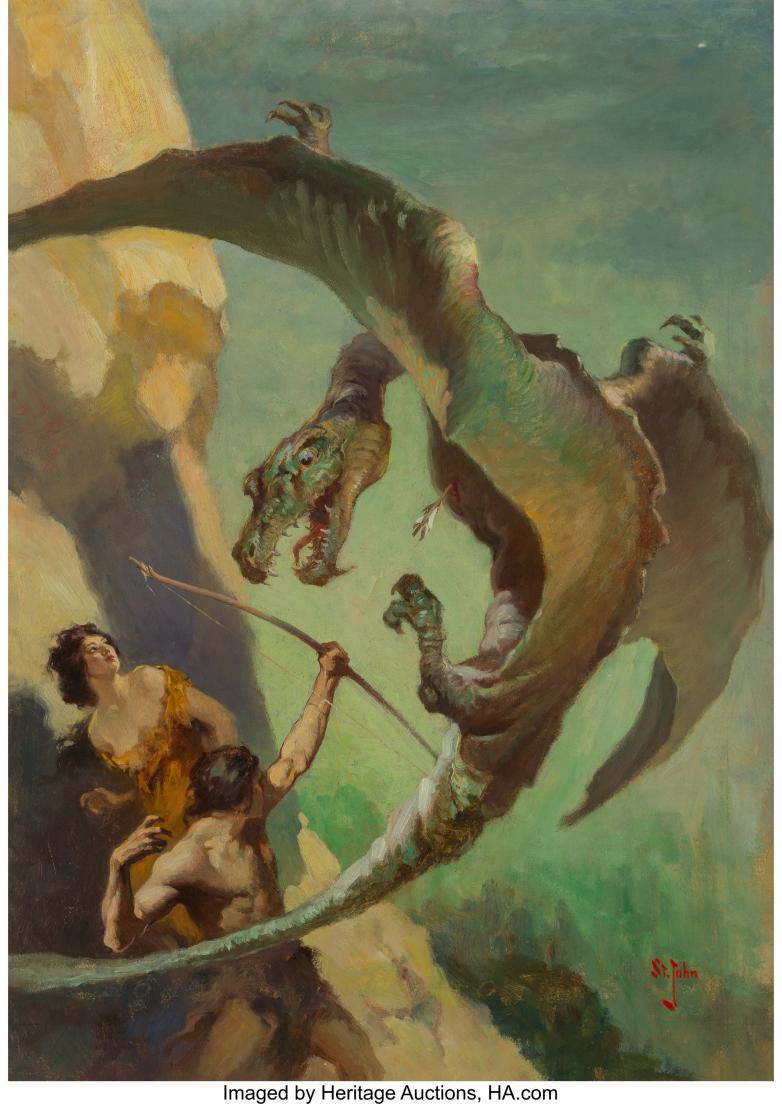 The original art for James Allen St. John's At the Earth's Core dust jacket sold for $112,500.

Dallas – Multiple auction records were shattered in The Glynn and Suzanne Crain Science Fiction Collection Auction at Heritage Auctions Aug. 13-14 in Dallas, Texas. The White Glove auction totaled $2,407,620, exceeding the pre-auction estimate by more than $1 million, and boasted a sparkling 100% sell-through rate by value and by lots sold.

“We knew beforehand that some of the lots were very rare, or even unique items that were traded privately before making their auction debut in this sale,” Heritage Auctions Vice President Todd Hignite said. “To post a sell-through rate of 100% is spectacular, and only reinforces what we already knew: that the Crain collection is one of the finest ever brought to auction. We saw scores of new bidders, confirming our belief that this great material has huge appeal outside of the traditional collecting circles.”

Among the world auction records set:

More than 30 collectors made bids for James Allen St. John At the Earth's Core book dust jacket, 1922 to drive its final price to $112,500, breaking the record for St. John and claiming top-lot honors in the sale. The image once was published on the hard cover dust jacket of the first edition of At The Earth’s Core, by Edgar Rice Burroughs (A.C. McClurg & Co., 1922), and is cited as a significant reason for St. John’s impact on the visual language of fantasy illustration.

Frank R. Paul The Moon Conquerors, Science Wonder Quarterly cover, Winter 1930 nearly tripled its pre-auction estimate when it sold for $87,500, thanks to bids from 28 eager collectors. The water-and-gouache-on-board painting is signed by Paul and broke set the record for works by the artist, who had three lots in the sale.

Michael Whelan Foundation's Edge paperback cover, 1983 more than quadrupled its high pre-auction estimate when it closed at $68,750, also setting a new auction record for the artist, thanks to bids from 40 eager collectors. The painting was published as the paperback cover of Isaac Asimov's Foundation's Edge (Del Rey Books, 1983), which is considered a central building block for science fiction in general. Its appearance as the cover of such an important science fiction novel and the stunning detail have earned this painting a reputation as one of Whelan's finest ever to be offered at auction.

Additional auction records were set for these artists:

Edmund Emshwiller Starship Soldier, The Magazine of Fantasy and Science Fiction cover, November 1959 also soared past its pre-auction estimate, by more than 500%, before finishing at $37,500. Robert Heinlein’s Starship Soldier would be published later as the highly acclaimed novel Starship Troopers.

“The marketing plan was fantastic,” Glynn Crain said, “and the results exceeded my wildest dreams!”