Rare, Significant Alexander Hamilton Material to be Auctioned in October 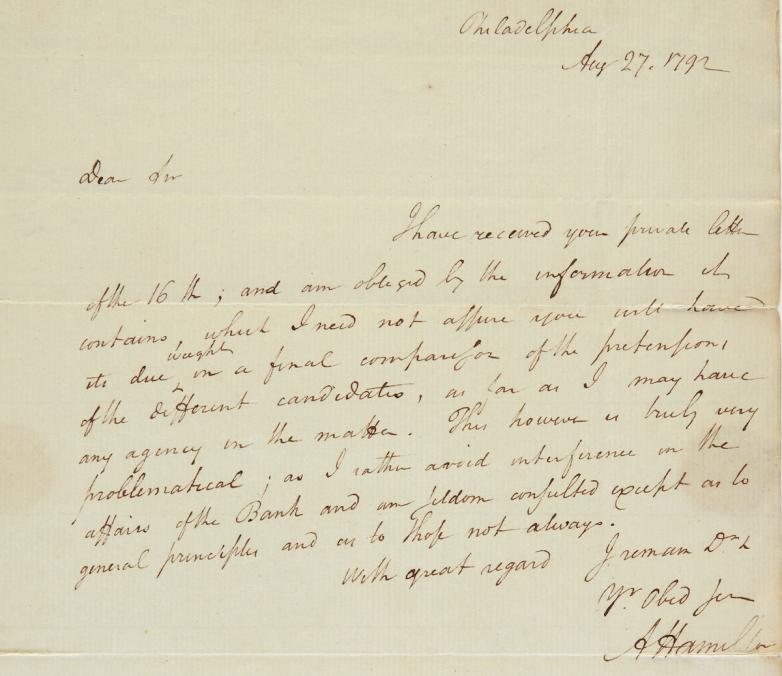 A 1792 letter signed by Hamilton as the first US Secretary of the Treasury to John Hopkins, Commissioner of Loans for the State of Virginia. Estimate: $8,000-12,000

Collectors of documents of American history, particularly items related to Hamilton and the US Federalist Era, will find objects of deep significance—including rare documents, autograph letters, checks, and broadsides—from a critical and fascinating moment in American history, presented by the specialists in Freeman’s Books and Manuscripts department.

The selective approximately fifty-lot auction is rooted in the extensive collecting activity of John E. Herzog, a collector of financial documents of the 18th century and the Federal period in United States history. Herzog’s lifetime of experience in finance—including his founding the Museum of American Finance—sparked a deep, personal interest in Hamilton material, particularly as related to Hamilton’s position as first Secretary of the Treasury and the establishment of the US financial system as we know it.

Of the items in the October 25 auction that highlight Hamilton’s work in this field, there is perhaps none so important as the first printing of the 1789 Report of the Secretary of the Treasury…for the Support of the Public Credit of the United States, the landmark document of American capitalism outlining Hamilton’s financial plans for the new nation (estimate: $30,000-50,000).

Though most documents in The Alexander Hamilton Collection of John E. Herzog outline Hamilton’s impact on American history through the Treasury, some delve into the Founding Father’s personal life; a rare first edition of the infamous “Reynolds Pamphlet” is on offer at a pre-sale estimate of $8,000-12,000. The pamphlet is Hamilton’s own summary of his notorious affair with Maria Reynolds—admitting to the affair, but summarizing the subsequent extortion by Reynolds and her husband, and denying all charges of corruption.

A number of autograph letters will be offered, including a 1792 letter signed by Hamilton as the first US Secretary of the Treasury to John Hopkins, Commissioner of Loans for the State of Virginia (estimate: $8,000-12,000); another, from 1794, is addressed to Thomas Willing, the first president of the First Bank of the United States, regarding the repayment of debts to France incurred during the American Revolution (estimate: $8,000-12,000). An autographed check, signed by—and executed entirely in the hand of—Hamilton, from 1795, is an auction highlight, offered at a pre-sale estimate of $5,000-8,000.

In addition to The Alexander Hamilton Collection of John E. Herzog, Freeman’s is pleased to present a robust fall sale season: Art and Design on September 15, Books and Manuscripts on September 23, Asian Arts on October 8, Jewelry and Watches on October 28, American Furniture, Folk and Decorative Arts on November 10, Modern and Contemporary Art on November 17, American Art and Pennsylvania Impressionists on December 5, and Design on December 8.