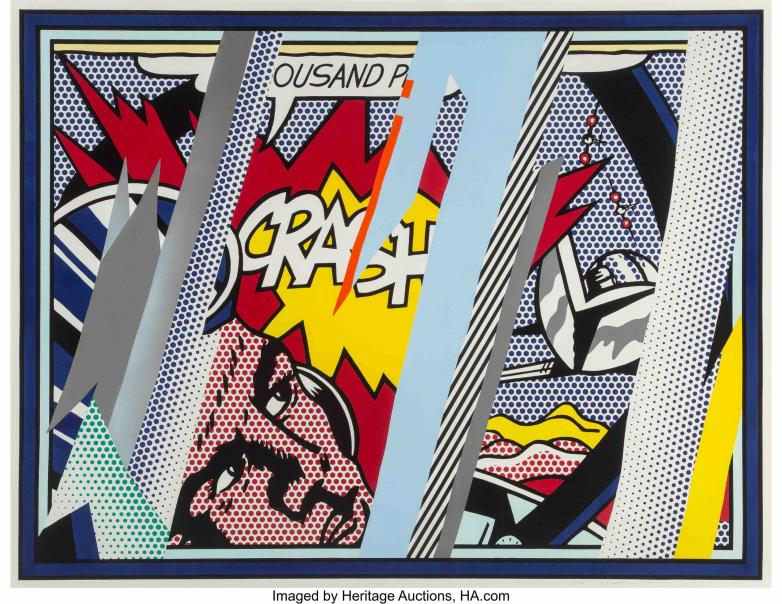 Leading the sale is Roy Lichtenstein’s Reflection on Crash (estimate: $100,000-150,000), part of the artist’s Reflection Series. The lot exemplifies Lichtenstein’s objective to obscure subject matter, appropriated from previous works and comic book references, with reflective streaks exploring themes of light and reflection. The print is a rarity, editioned No. 57 out of 68, along with 16 artist’s proofs.

“Roy Lichtenstein’s Reflection series is important enough to have a permanent place in the Tate Museum, and this is truly a museum-worthy piece,” Heritage Auctions Modern & Contemporary Art Director Holly Sherratt said. “His works have enjoyed tremendous success at previous auctions at Heritage, and Reflection on a Crash is a beautiful print, a throwback to his 1960s pop art around which a strong collection can be built.”

Another highlight is KAWS’ Seeing (estimate $40,000-60,000). A varying take on the artist’s well-known BFF figure, in which the eyes have been replaced with LED lights allowing the alloy and ceramic sculpture to operate as a glow in the dark lamp. Seeing, which is editioned No. 69 of 50, accompanies KAWS’ Tension Portfolio, 2019 (estimate: $60,000-80,000), a series of 10 screen prints in the artist’s distinct style, each of which is signed, numbered and dated in pencil along the lower edge.

Another top lot is Coeurs Volants by Marcel Duchamp (estimate $40,000-60,000). Translating to “Fluttering Hearts,” the overlying red and blue hearts play on theories of psychological optics. A handsome work by David Hockney rounds out the highlights. Sun, from the artist’s Weather Series, utilizes Japanese influences to depict various stylizations of atmospheric events.

Bidding is open for Heritage Auctions’ April 21 Prints and Multiples Auction. For more information and images, or to view or download a printable catalog of the sale, visit HA.com/8023.