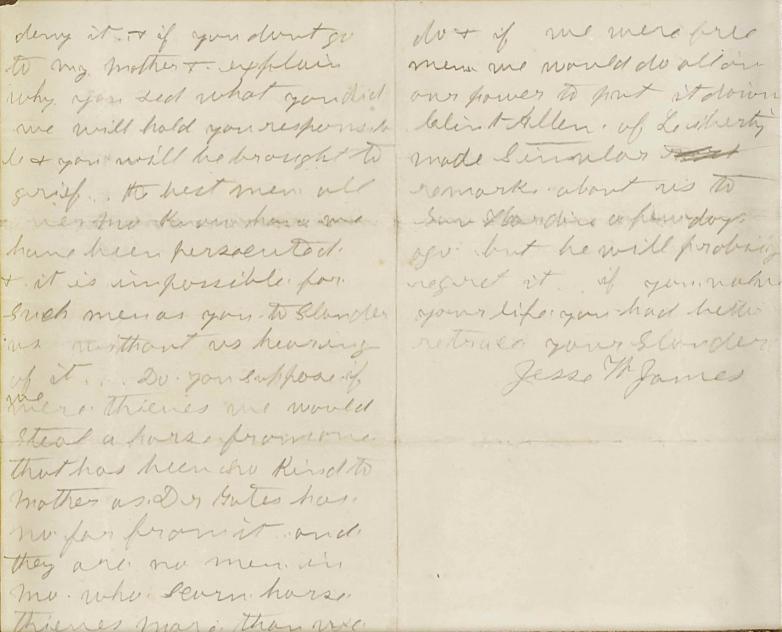 New York – An extremely rare, documented letter of outlaw Jesse James highlights Bonhams sale of Fine Books & Manuscripts on October 23. This letter is one of only three known to exist outside the family. It has an estimate of $200,000-300,000.

Darren Sutherland, Bonhams Specialist of Books & Manuscripts, comments: “This is everything you'd want in a Jesse James letter - the protest of innocence and the simmering threat. James letters are very rare in the market with all but a few examples with the family.”

Jesse W. James, one of America’s most notorious outlaws, writes a heated letter to Mr. Flood, who accuses Jesse and his brother Frank had stolen a horse from Dr. William J. Yates. “...Do you suppose if we were thieves we would Steal a horse from one that has been so kind to Mother as Dr Yates has no far from it ... and they are no men in Mo. who scurn horse thieves more than we do & if we were free men we would do all in our power to put it down Clint Allen of Liberty made Similar remarks about us to Sam Wardin a few days ago but he will probily regret it ... if you value your life you had better retrace your Slander. Jesse W. James.”

On January 25, 1875, the James's farm in Kearney, Missouri, was raided, and James’s 9-year old half-brother Archie was killed and his mother Zerelda Samuel lost her right arm. One of the first doctors to arrive was William G. Yates. James's debt to Dr. Yates is on display in the letter, and it is significant that he employs Yates, whose stolen horse is in question, to deliver the letter to Flood.