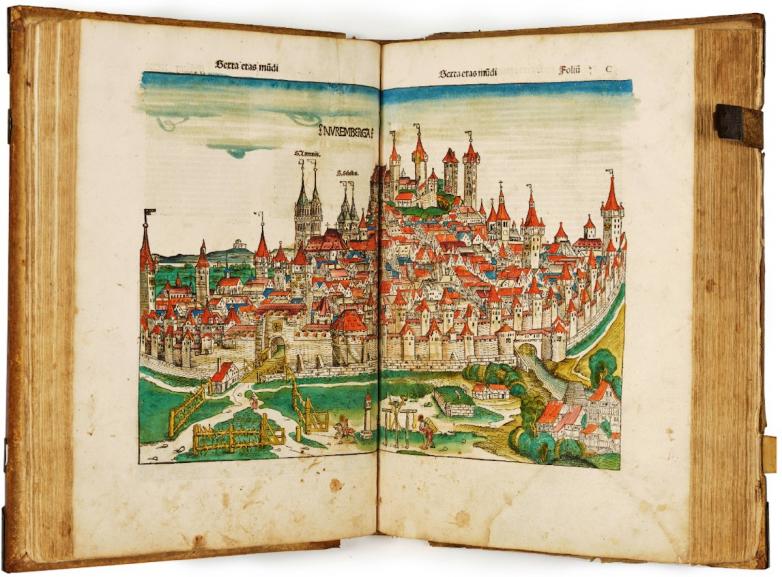 New York — When Johannes Gutenberg introduced moveable type to Europe in 1439, he sparked a revolution in the dissemination of knowledge that changed the world for ever. Books printed in the period from then until around 1500 are known as incunabula. Among the most famous of these – and certainly the most lavishly illustrated and beautiful – is the Nuremberg Chronicle, an extremely rare first edition of which, hand colored by contemporary artists and bound for the publisher in Nuremberg by the Weltchronik-Meister, leads Bonhams Fine Books & Manuscripts sale in New York on Friday 11 December. It is estimated at $200,000-300,000.

A pictorial history of the world, the Nuremberg Chronicle was written over several years by the doctor and book collector Hartmann Schedel, who was commissioned by two Nuremberg merchants. It was originally published in Latin in an edition of around 1400-1500, of which 400 are thought to have survived. It came in two formats; unbound and uncolored and, at a considerably higher price, hand-colored and bound - this copy is hand-colored and bound in the original first binding from the Nuremberg Weltchronik-Meister.

The 29 large double-page city views, many illustrated for the first time, are accurate in depicting particular, distinguished, features of each city. In addition it includes many details of 15th-century daily life: carpenters with their tools, astronomers and their instruments, archers, bridges, derricks, dishes, furniture, windmills, ships, beds, houses, fortifications, weapons, tents, wharves, ferries, books, drawing materials, dogs, horses, and other animals, as well as costumes.

Bonhams Director of Fine Books in New York, Ian Ehling, said: “It is impossible to exaggerate the significance of the Nuremberg Chronicle. Magisterial in its scope and ambition, it was the first printed work to integrate text and illustrations in a truly successful and effective way. First editions of the Chronicle in their original binding with contemporary hand-colored illustrations very rarely appear on the open market. This wonderful copy is already exciting much interest among collectors.”

•    A 12th-century manuscript of the Confessions of St Augustine of Hippo 354-430. Written in AD 397-400 while Augustine was in his early 40s, The Confessions is an autobiographical work of 13 chapters covering the writer’s sinful youth, his conversion to Christianity and the development of his thought. A revolutionary and influential work, the book still enjoys a reputation as a key text of Western literature. This edition is believed to have been produced in Italy in the mid-12th century. It is estimated at $100,000-150,000.
•    A handwritten letter by Malcolm X. 1925-1965. (El-Hajj Malik el-Shabazz). A profoundly important Malcolm X letter written from Mecca upon the completion of his pilgrimage (hajj) on the transformation he experienced and acknowledging a turning point in his thinking on race in America. Estimate: $40,000-60,000.
•    Original manuscripts, documents, and photographs from the estate of Clara Barton, founder of the American Red Cross, including an original autograph manuscript of the Charter for the American Red Cross in the hand of Clara Barton ($30,000-40,000), a series of letters from Susan B. Anthony to Clara Barton, and her original diary from 1874-1875.
•    The Charles Dickens Collection of Martin Nason including a presentation copy of the Old Curiosity Shop (estimate: £30,000-50,000), the rare trial issue of A Christmas Carol, as well as a fine collection of signed photographs, manuscripts and printed ephemera from the writings and life of Charles Dickens.