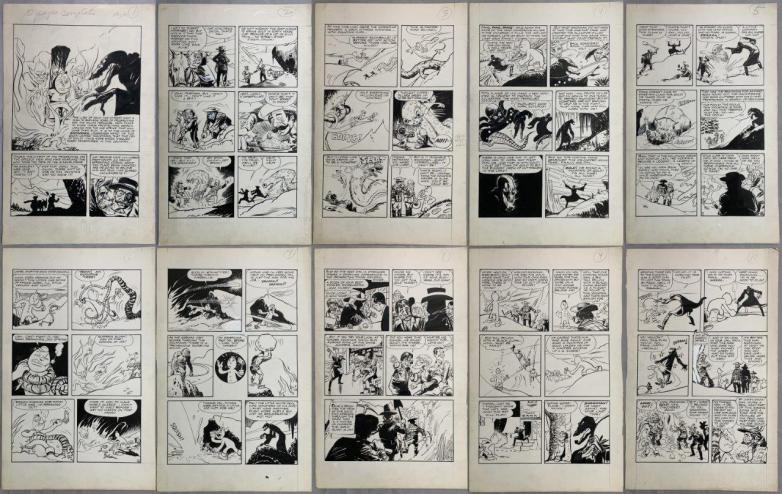 Lynbrook, NY – Rare early stories by the renowned American fantasy and science fiction artist Frank Frazetta (1928-2010), done when he was a boy in his mid-teens and quite possibly the earliest Frazetta comic art in existence, will be centerpiece lots in Weiss Auctions’ next big sale planned for Thursday, March 26th, online and in the Lynbrook gallery at 74 Merrick Road.

The auction, with a 10 am Eastern start time, is packed with more than 500 lots of comics, comic art, sports memorabilia, animation art and Disney collectibles. Highlights include another great group of artwork from the estate of the Polish-born American comic book artist Joe Kubert (1926-2012), Part 1 of “The Golden Age Comic Art Find” from the Bailey Publishing archive.

The Bailey Publishing archive includes hundreds of pages of original Golden Age comic art, covers, stories and more, but it’s also where Frank Frazetta comes into the picture. Frazetta wrote his very first story as a teenage boy, titled "Adventures of the Snowman," published by Bailey in the 1940s. And, while that story is not part of the auction, other related stories and artworks are.

Up for bid will be a complete ten-page, unpublished story by Frazetta titled "Snowman" that’s expected to bring $30,000-$50,000, not unreasonable considering many of his comic pages sell for $15,000-$30,000. And because Frazetta was so young, still a teen, this story is a true slice of comic book history. Also offered will be an unfinished pencil and ink story by Frazetta, six pages, titled Buckeye, signed on the title page by Frazetta – classic Golden Age story roughs.

Artworks certain to attract attention include an original color illustration by Jean Henri Gaston Giraud (French, 1838-2012), who worked under the pseudonym Moebius; an original Sunday Peanuts comic art page by Charles Schulz, dated 5/17/1970; a 1937 Disney color production cel from Snow White and the Seven Dwarfs, titled Dopey with Animals; and original Golden Age comic cover art for Tom Thumb by Frank Little, who once worked as an animator for Dr. Seuss.

John Giunta (1920-1970) was an illustrator of comic books from the 1940s thru the 1960s. He worked on horror titles like Tomb of Terror, Chamber of Chills, Journey into Mystery and Weird Tales. Giunta will appear multiple times in the auction, with an 8-page comic book story titled Funnyman; original cover art for Cisco Kid #1; and original cover art for Tally-Ho Comics #1.

The sports collectibles category is compelling, with items such as a 1934 Tour of Japan page signed by 16 team players, including Babe Ruth and Lou Gehrig; a Roger Maris single-signed baseball; a three-sheet poster and lobby card set for the 1962 movie Safe at Home with Mickey Mantle and Roger Maris; and Hall of Fame plaques signed by Napoleon Lajoie and Hugh Duffy.

Internet bidding will be facilitated by Proxibid.com, Invaluable.com and Auctionzip.com. Phone and absentee bids will also be accepted.

Weiss Auctions is always accepting quality consignments for future auctions. To consign an item, estate or a collection, you may call them at (516) 594-0731; or, you can send an e-mail to Philip Weiss at Phil@WeissAuctions.com. For more information about Weiss Auctions and the big auction slated for Thursday, March 26th, visit www.WeissAuctions.com. Updates are posted often.