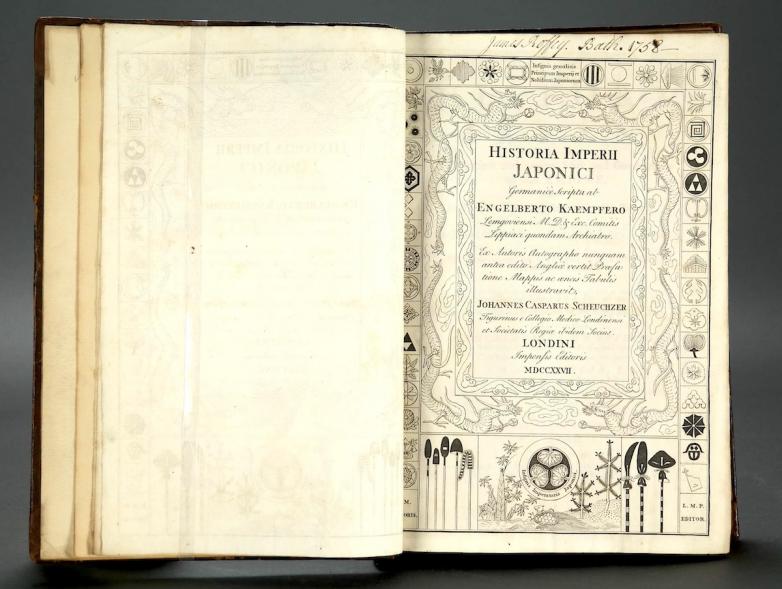 Two volumes titled The History of Japan by Engelbertus Kaempfer, printed for the publisher and sold by T. Woodward and C. Davis (London, 1728). Estimate: $2,000-3,000

A baseball signed by John F. Kennedy passed by descent from the estate of Edna Kelly, who served as a Member of the U.S. Congress from New York from 1949-1969, and as a colleague of then-Congressman Kennedy from 1949-1953. The ball is one of many items from her professional career that were inherited by her family. Its auction estimate is $10,000-$12,000.

Carrying the same lofty estimate is a 2005 photograph of Kate Moss (British, b. 1974-) taken by artist and photographer Chuck Close (American, b. 1940-). Titled Portrait of Kate Moss, it is numbered 5/25 and pencil-signed by Close on the margin. A daguerreotype camera was used in taking the shot, which was part of a series commissioned by W Magazine.

A copy of Lewis Carroll’s Alice’s Adventures in Wonderland was published in 1969 and illustrated by the Spanish surrealist Salvador Dali (1904-1989). It is numbered 1331/2500 and signed by Dali on the title page, with an original etched frontispiece in four colors signed in the plate, plus 12 color heliogravures, each with an original remarque. The book was published by Maecena Press and Random House (Paris and New York) and is expected to sell for $4,000-$6,000.

The highest-estimated Civil War lot, a letter from General Ulysses S. Grant to Abraham Lincoln, dated Feb. 8, 1863, is believed to have been dictated by Grant and written by another hand as a retained (or field) copy. The letter urges the promotion and transfer of Captain R. B. Hatch, as recommended by General Prentiss to his command. The letter comes to auction with a $4,000-$6,000 estimate.

A first-edition Confederate-issued map of Virginia from 1862, uncolored and based on the seminal Lewis von Buchholtz map of Virginia published in 1858, carries an estimate of $3,000-$5,000. The map illustrates the counties, principal towns, railroads, rivers, canals and internal improvements of Virginia at that time. It is bound in the original black paper boards with the Virginia Seal.

An 1883 first edition of Robert Louis Stevenson’s classic novel Treasure Island was published by Cassell & Company (London, Paris and New York) and has a $2,500-$4,000 estimate. Also, a first U.S. six-volume edition of Victor Hugo’s Les Miserables, translated from the original French version and published in 1862 by Carleton (New York), should reach $700-$900.

A four-volume set of books titled Abstract Expressionism (Tiber Press, 1960) is an outstanding post-World War II American artist book featuring collaborations of four of the most influential American poets of the second half of the 20th century and four important second-generation artists, all of whom lived in New York City. Numbered 110/200, it has a pre-sale estimate of $3,000-$5,000.

A two-volume set of books titled The History of Japan by Engelbertus Kaempfer, printed for the publisher and sold by T. Woodward and C. Davis (London, 1728), is estimated at $2,000-$3,000. Translated from the original manuscript, the books give an account of the ancient and present state and government of Japan, with a description of the Kingdom of Siam.

A black and white photograph of Neil Armstrong, taken at a President’s Dinner for the Society of Experimental Test Pilots and boldly signed by the legendary astronaut circa 1969, will cross the auction block with a $600-$800 estimate. The photo was taken by Robert Keller, a photographer who was often hired by the Beverly Hilton Hotel during that period of time. The photo comes to auction directly from the family of Mr. Keller.

Quinn’s Thursday, Oct. 29, 2020 auction will start at 2 p.m. ET. There will be no in-person floor bidding; all bidding will be by phone, live via the Internet through LiveAuctioneers.com or Invaluable.com; or absentee prior to auction. In-person previews available by appointment only. To schedule an appointment, request a condition report about any item in the auction, or to discuss consigning to a future Quinn’s auction, call Jennifer Sweetapple at 703-532-5632, ext. 573; or email jennifer.sweetapple@quinnsauction.com. Visit Quinn’s online at www.quinnsauction.com.