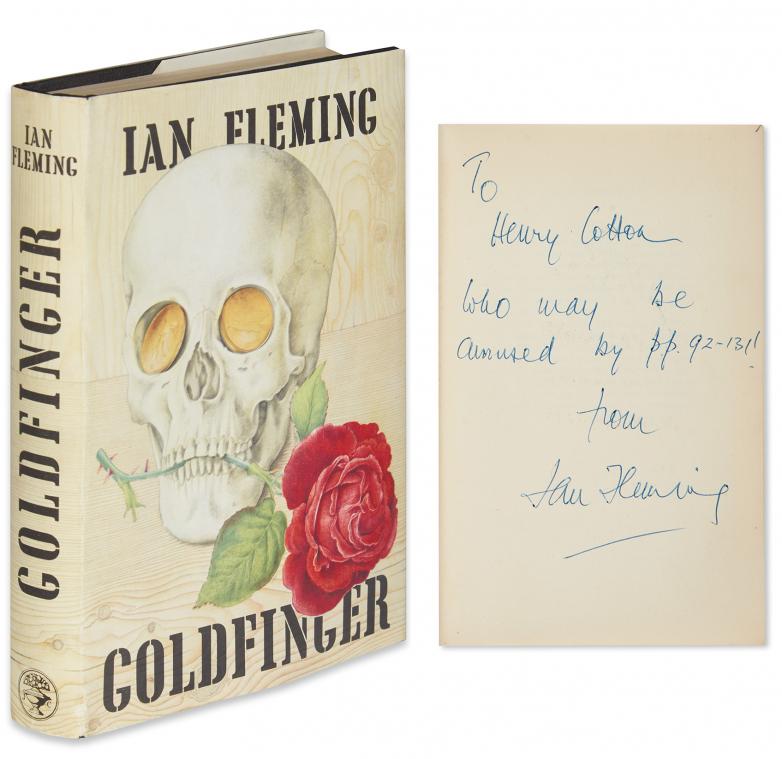 New York – “The enduring appeal of inscribed first editions, particularly those with a significant associations, was on full display and resulted in a number of high prices, including several records,” said John D. Larson, specialist for Swann Galleries’ 19th & 20th Century Literature sale on Tuesday, May 14.

Ian Fleming’s James Bond was the star of the sale with four first editions ranking among the top ten lots: Goldfinger, 1959, led the sale at $25,000, and featured an inscription to Sir Henry Cotton, MBE–three-time winner of The Open Championship–recommending a particular golf scene in the book; Fleming’s first Bond novel, Casino Royale, 1953, in the first state dust jacket earned $18,750; a presentation copy of Thunderball, 1961, inscribed to Charles Douglas Jackson, a friend of Fleming’s who was posthumously revealed to be a CIA agent, brought $16,250; and the rarest Bond title, The Man with the Golden Gun, 1965, with the gilt gun stamped on the front cover, earned $11,050.

Auction records were set for several titles by Edgar Rice Burroughs with an inscribed first edition of Tarzan the Invincible, 1931, at $3,500, and a signed first edition, presentation copy of At the Earth’s Core, 1922, at $3,750. Further genre works of note featured a first edition in the unrestored dust jacket of Hugo Gernsback’s foundational science-fiction classic Ralph 124C 41+. A Romance of the Year 2660, 1925, which earned $9,375.

A scarce presentation copy of Security Analysis, 1934, inscribed to a Wall Street trader was won for $20,000. The first edition is likely the first known to bear the signature of its principal author, Benjamin Graham.

Nineteenth-century titles included the first American edition of Mark Twain’s Adventures of Huckleberry Finn, 1885 ($7,500); first editions, first issues of Sir Arthur Conan Doyle’s The Adventures of Sherlock Holmes, 1892, and The Memoirs of Sherlock Holmes, 1894 ($3,250); and a signed author’s edition of Walt Whitman’s Leaves of Grass, 1876 ($4,500). Ralph Waldo Emerson’s copy of the reconstituted issue of the Transcendentalist periodical The Dial: A magazine for Literature, Philosophy, and Religion, 1860, with notations in Emerson’s hand, brought a record for the work at $3,250.