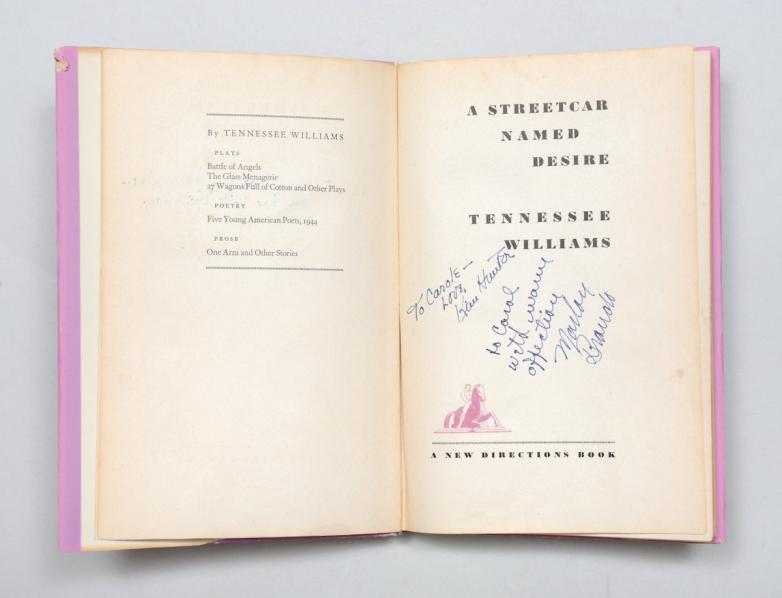 Tennessee Williams’s A Streetcar Named Desire inscribed by almost the entire cast of the 1947 Pulitzer Prize-winning play, including Marlon Brando.

The catalogue includes a fine selection of rare first editions of popular works of literature by Arthur Conan Doyle, Virginia Woolf and Kenneth Grahame and several noteworthy presentation copies, such as the Mysteries of Police and Crime, a sensational account of English crime inscribed to Sir Robert Anderson, Assistant Commissioner in the Jack the Ripper case, by the author – a well-regarded prison governor and penologist, Major Arthur Griffiths.
A presentation copy of Das Unbehagen in der Kultur inscribed by Sigmund Freud to fellow psychologist and pioneer in the psychoanalysis of sexuality, Havelock Ellis, is another highlight of the collection.

Collectors will find some superb association copies such as Tennessee Williams’s A Streetcar Named Desire inscribed by almost the entire cast of the 1947 Pulitzer Prize-winning play, including Marlon Brando, as well as a copy of Ascent of Everest signed by an unusually full gathering of significant signatories on the expedition, including Sherpa Tenzing Norgay in both Roman and Nepali characters.

“Our annual summer miscellany catalogue is always very popular. This year in particular we have had an unusually busy cataloguing season that has enabled us to unearth and present some truly rare books that would find pride of place on any collector’s shelf. We also have several storied books starting from just a few hundred pounds that would make wonderfully personal gifts or early purchases for rare book enthusiasts starting out on their collector journeys,” says Pom Harrington.

•    Tennessee Williams’s A Streetcar Named Desire - First edition, a remarkable copy, unusually inscribed by almost the entire Broadway cast of the 1947 Pulitzer Prize-winning play, including Marlon Brando – £15,000.
•    Mysteries of Police and Crime, inscribed to Sir Robert Anderson, Assistant Commissioner (CID) in the Jack the Ripper case by the author, a well-regarded prison governor and penologist, Major Arthur Griffiths - £3,750.
•    The complete writings of Winston Churchill – first British editions of all of Churchill’s major works, a rare set in matching bindings, finely executed by Bayntun of Bath – £37,500.
•    Manchester University Computer - Inaugural Conference - July 1951 by Alan Turing – the first edition of the brochure marking the official inauguration of the Ferranti Mark I computer, Britain’s (and arguably the world’s) first commercially manufactured computer – £5,500.
•    Love and Safety - An early edition of this exceptionally rare and remarkably obscene women’s guide from the late 1800s to all matters pertaining to sexual pleasure, the avoidance of pregnancy, and the simulation of virginity. £1,350.
•    First edition of Arthur Conan Doyle’s first Sherlock Holmes story A Study in Scarlet in book form - £25,000.
•    Speaking my Mind - Signed limited edition of Ronald Reagan’s selected speeches – from his days as an actor to this farewell address upon leaving office, presented as issued in a striking oak box emblazoned with the Presidential Seal - £3,250.
•    Mrs. Dalloway – first edition of Virginia Woolf’s mould-breaking masterpiece, in the very scarce Vanessa Bell-designed jacket. Only 2,000 copies of the first printing were produced, and the dust jacket is one of the finest Bell ever designed and rare in collectable condition – £27,500.
•    Scotland's Gift. Golf. Reminiscences 1872-1927 - first edition, one of only 260 signed by the author Charles Blair Macdonald. This is one of the most highly valued books on American golf history and is scarce in good condition with the map intact, as here. Macdonald was an influential champion of golf in the United States and laid out several well-known courses, including the National Gold Links of America, The Creek Club, Piping Rock Club, Greenbrier Hotel course, and the Yale University golf club - £5,500.
•    Signed limited edition of Wind in the Willows, signed by both author Kenneth Grahame and illustrator Ernest H. Shepard.  Shepard’s classic illustrations of anthropomorphized animals render this the most popular version of the book even today - £12,500.
•    First edition of Humphry Repton’s first book Sketches and Hints on Landscape Gardening - the work in which he laid out “his claim to the position of a national authority” on landscape gardening. £19,500.
•    Ascent of Everest by John Hunt – First edition, this copy signed by Hunt, Edmund Hillary, and significantly by Tenzing Norgay in both Roman characters and Nepali, together with nine other members of the team. It is extremely unusual to find a copy signed by so many of the members of the team - £5,750.
•    True first edition of Athanasius Kircher’s highly influential work on China, considered by many to be the most popular and influential seventeenth-century book on China - £8,500.
•    A superb presentation copy of Das Unbehagen in der Kultur inscribed by Sigmund Freud to a fellow psychologist, who pioneered the psychoanalysis of sexuality: “To Havelock Ellis with affectionate regards Freud 1929/30” – £22,500.